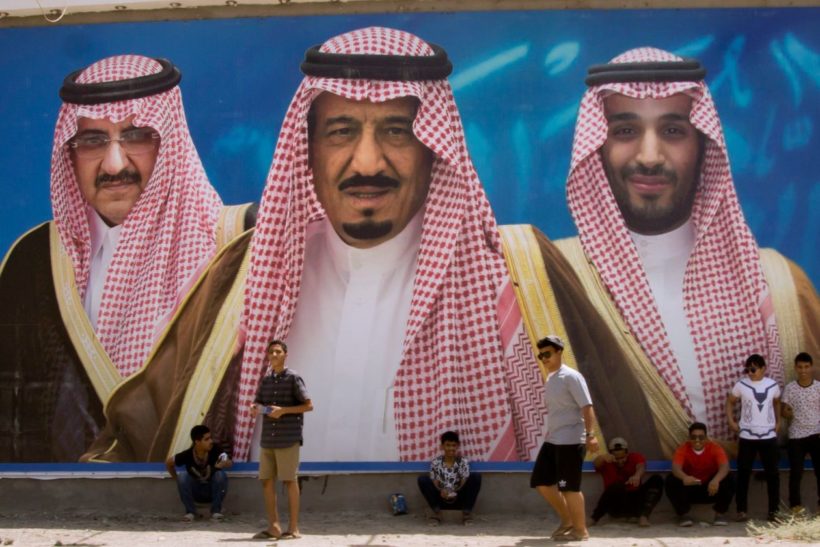 A banner in Taif, Saudi Arabia, in 2017 showed King Salman flanked by his son Mohammed bin Salman (aka MBS), at right, and Prince Mohammed bin Nayef (aka MBN), who was detained and accused of treason Friday, March 6.

(by Summer Said in Dubai, Justin Scheck in New York and Warren Strobel in Washington, The Wall Street Journal) – Saudi Arabian authorities detained two of the kingdom’s most prominent figures for an alleged coup attempt, further consolidating the power of the king’s son, Crown Prince Mohammed bin Salman (MBS), and clearing away once-formidable rivals to the throne, according to people familiar with the matter.

The detentions occurred early Friday morning (March 6) when guards from the royal court wearing masks and dressed in black arrived at the homes of the two men, took them into custody and searched their homes, according to people familiar with the matter. 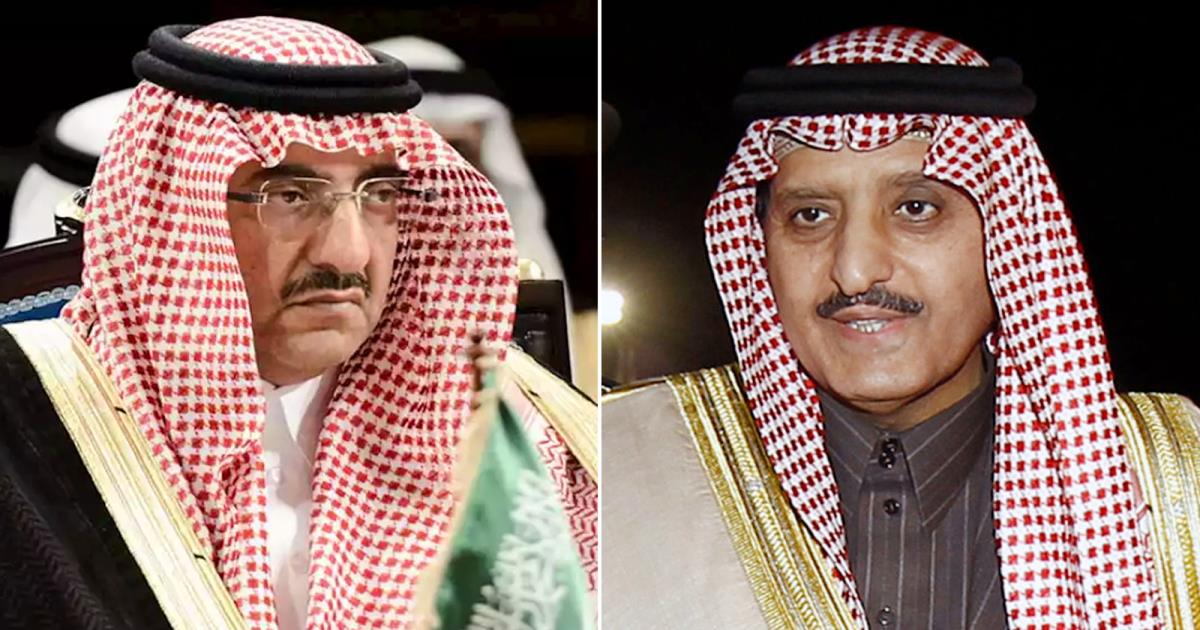 The Saudi royal court accused the two men of plotting a coup to unseat the king and crown prince, according to people familiar with the situation.

The two men who potentially had once been in line for the throne are now under threat of lifetime imprisonment or execution, said people familiar with the situation. The details of the alleged coup attempt couldn’t be learned.

Prince Ahmed and MBN spent time as minister of the interior, a powerful position with oversight of troops and Saudi Arabia’s large intelligence service.

MBN had close ties to U.S. intelligence and was respected for his knowledge of security and terror threats in the Middle East. But over the past few years, their standing in the royal family has diminished as King Salman consolidated power and installed his son Mohammed bin Salman—known as MBS—as crown prince and the kingdom’s day-to-day ruler.

The arrests cast aside two men who could have been rivals to MBS’s claim to the throne if 84-year-old King Salman died or decided to abdicate. MBN had been first in line for the throne as Salman’s crown prince until 2017, when MBS was elevated over him.

Early in MBS’s ascent, his social and economic reforms [were viewed favorably by] many Western officials who had long called for the kingdom to lift restrictions on women and foster a more diversified economy, rather than remain heavily reliant on oil.

But the prince’s tactics for cracking down on corruption, silencing dissent and marginalizing rivals have since alienated many in the U.S. and Europe, especially in the time since MBS became crown prince. To curb corruption, MBS launched a surprise dragnet in 2017 that saw many of the kingdom’s most powerful businessmen and royals locked up in the Riyadh Ritz-Carlton Hotel and accused of ripping off the government. Many were only released after agreeing to pay tens of millions of dollars to the royal court.

The next year, Saudi dissident Jamal Khashoggi, a columnist for The Washington Post, was murdered…in Turkey by men working for MBS. The backlash presented the biggest threat yet to the crown prince.

In a further crackdown on dissent, Prince Mohammed has arrested online critics and used armies of Twitter accounts to criticize people who question his governance. Men working for him were also accused by the U.S. Justice Department last year of paying two Twitter employees for private information on dissidents. …

—Bradley Hope contributed to this article.

Published at wsj .com on March 6, 2020. Reprinted here for educational purposes only. May not be reproduced on other websites without permission from The Wall Street Journal.

2. a) Who was arrested?
b) For what reason were they arrested?
c) What details are known about the alleged plot?

3. What potential punishment do the men face?

4. All positions in the Saudi government are filled by members of the royal family of al Saud. Prince Ahmed and MBN had both been minister of the interior, which is a powerful position. Why have they been stripped of their governmental power over the last few years?

5. For what actions has the crown prince come to be viewed in a negative light by Western leaders (after having initially been seen as enacting modern reforms?

Saudi Arabia is an absolute monarchy, ruled by the al-Saud family in alliance with the Wahhabi clerical hierarchy. In its modern form, its first ruler was King Abdulaziz, known as Ibn Saud, who conquered and united the current kingdom and died in 1953.

All subsequent rulers have been chosen from among his estimated 45 sons by different wives.

When King Abdullah died in January 2015, his half-brother and successor, King Salman, for the first time appointed an heir from the next generation, Mohammed bin Nayef.

He subsequently appointed his own son, Prince Mohammed bin Salman, as deputy crown prince. This meant that for the first time the three most powerful men in Saudi Arabia were all from the same branch of the royal family – son and grandsons of Ibn Saud by one of his favourite wives, Hassa al-Sudairi. (from the UK Daily Telegraph)

MBN was for years a trusted contact for U.S. security and intelligence officials. As the head of Saudi counterterrorism efforts, he shared information with American counterparts about planned attacks and gained allies throughout the State Department and Central Intelligence Agency. Many U.S. officials were dismayed by his ouster in 2017, said several former intelligence and State Department officials, since they felt he was the U.S.’s most reliable ally within the royal family.

MBN has been under house arrest for much of the time since MBS stepped in front of him, though he did appear at private events during an investment conference last fall, said people familiar with the matter.

Prince Ahmed’s role has been more complicated. Since the death of Saudi Arabia’s founder, the crown has passed from one son to the next, always going from brother to brother. Some members of the royal family wanted to see the crown passed to Ahmed, the king’s brother, rather than to MBS, said people familiar with the matter.

Ahmed largely avoided politics since Salman took the crown, but in 2018 he made statements blaming problems in Saudi Arabia on King Salman and MBS when protesters approached him on the street by his London home. Not long after, said a person familiar with the matter, the royal court sent an emissary to London to persuade Prince Ahmed to return to the kingdom.

“Going back to Saudi right now is a big mistake,” a friend of the prince’s recalled telling him at the time. Ahmed, this person said, explained that he wasn’t worried because, while he was on bad terms with MBS, he had a good relationship with his brother King Salman. Ahmed returned shortly after to the kingdom.

While Prince Ahmed has been publicly quiet since then, members of the royal family spoke often in recent months about how he had removed the photographs of King Salman and MBS from the wall of his Majlis, a meeting area for those who come to visit the prince, said a person who participated in those discussions.

MBN has remained out of the public eye since he was shifted from the crown-prince role in a late-night move by MBS. He hasn’t been allowed to leave Saudi Arabia. His public appearances late last year gave some longtime acquaintances the impression that he might be given more freedom. But a few months ago, said a person familiar with the matter, MBS stripped MBN of key staff, including a longtime security guard, replacing them with royal court loyalists.

Ahmed, meanwhile, recently went on a regularly scheduled, weekslong hunting trip. He arrived home in recent days, and people familiar with the matter speculated that the arrests Friday might have been timed for Ahmed’s return.