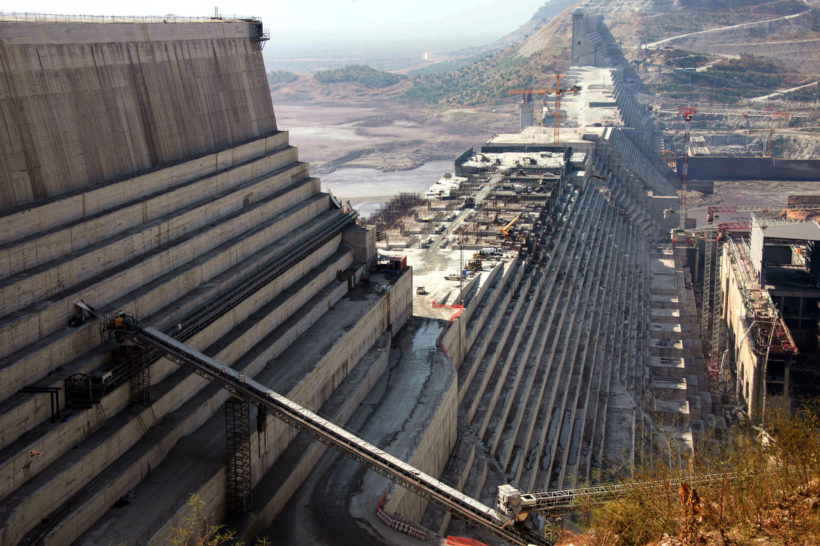 A view of the dam in November. Photo: Gioia Forster/DPA/Zuma Press

(by Hamza Hendawi, from the UAE’s The National) — Egypt, Ethiopia and Sudan reached a tentative agreement on the operation of a large dam on the Nile being built by Addis Ababa and the filling of its reservoir, after four days of talks in Washington.

The US Treasury Department said the agreement came late on Friday (Jan. 31) after negotiations between the foreign and water ministers of the three countries, with US Treasury Secretary Steve Mnuchin and World Bank President David Malpass attending as observers.

Technical and legal teams from the three countries will stay in Washington to prepare the final agreement, which will be signed by the end of February, the Treasury Department said.

The breakthrough follows years of tortuous negotiations in which disagreements between Cairo and Addis Ababa came close to derailing the talks altogether. …

Work on the Grand Ethiopian Renaissance Dam, which is being built on the Blue Nile tributary, is about 70 per cent complete and the filling of its reservoir is set to start this year.

Egypt, a mainly desert nation with about 100 million people, maintains that a significant drop in its share of Nile water would affect the livelihoods of hundreds of thousands of farmers and threaten its food security.

It wants the dam reservoir to be filled over six to seven years to reduce the effect downstream (while Ethiopia planned for four years). It also wants Ethiopia to release 40 billion cubic meters of water annually and show flexibility during sustained periods of droughts.

Ethiopia, where the dam is considered a symbol of national pride and essential to its development, baulked at Egypt’s demands, saying they infringed on its sovereignty.

It also accused Cairo of seeking to secure the lion’s share of the river’s water at any cost.

The dam’s reservoir can hold up to 74 billion cubic meters, a capacity Cairo believes is more than what is needed to generate power.

Tension over the project at times rose so high that talk about a possible military confrontation surfaced at one point.

The origins of the Blue Nile tributary are in the highlands of Ethiopia, whose political clout is rapidly growing in east Africa.

The tributary contributes about 65 per cent of the water reaching Egypt, which relies on the Nile for more than 90 per cent of its water needs and is already burdened with water shortages. 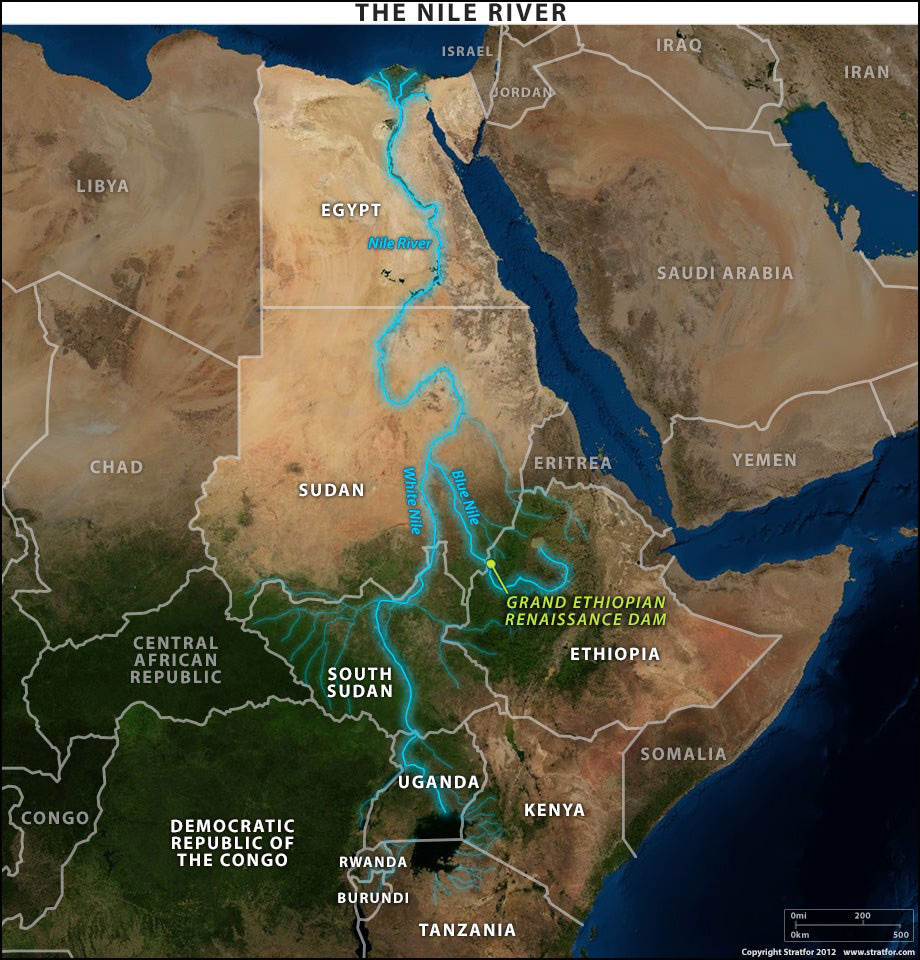 Sudan has an alternative source of water in both rainfall and the White Nile tributary, which runs the entire length of the vast African country.

The White Nile, which begins in central Africa, merges with the Blue Nile in the Khartoum district of Omdurman to form the Nile, which flows through Egypt and empties in the Mediterranean.

The Treasury Department said the three countries agreed on a schedule for the staggered filling of the dam reservoir, a “mitigation mechanism” for filling the reservoir during droughts, and a similar protocol for the annual and long-term operation of the dam.

It said the delegates also agreed on co-ordination mechanisms and provisions for the resolution of disputes and the sharing of information. They also agreed to address the dam’s safety and pending studies on its environmental and social impact.

Few details were given on the tentative agreements but Egypt’s Foreign Ministry welcomed the role played by President Donald Trump and his administration to allow the three countries to “reach a comprehensive, just and balanced agreement that safeguards their interests.” 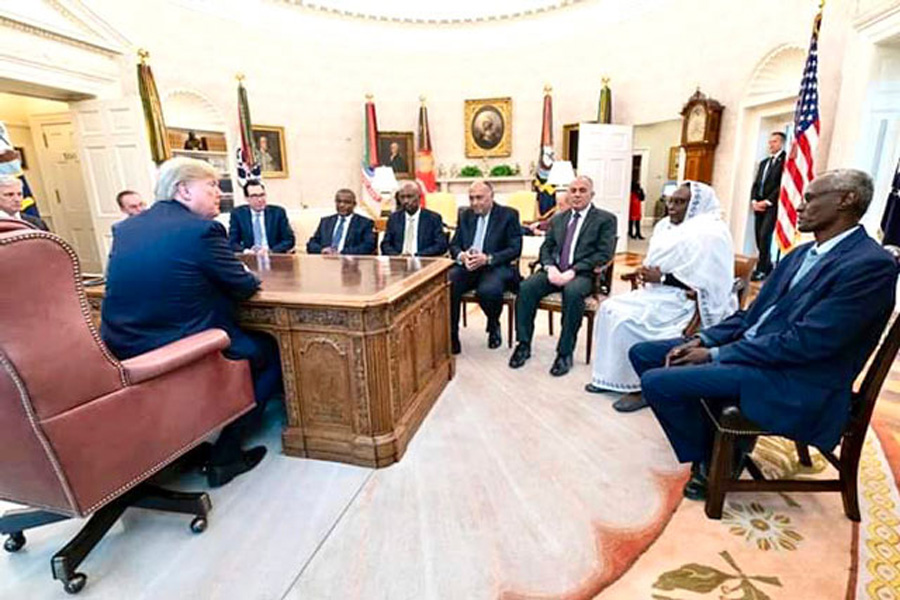 Water Resources Ministers of Egypt, Ethiopia and Sudan met with President Trump in the White House over the Grand Ethiopian Renaissance Dam.

The three countries said the ministers participating in the Washington talks “reaffirmed the importance of trans-boundary co-operation in the development of the Blue Nile to improve the lives of the people of Egypt, Ethiopia and Sudan.”

Published by the UAE’s thenational .com on Feb. 1, 2020. Updated Feb. 2, 2020 5:07 PM.  Reprinted here for educational purposes only. May not be reproduced on other websites without permission from The National.

From a Feb. 11 follow-up report:  The foreign ministers of Egypt, Ethiopia and Sudan will return to Washington this week for another round of talks to reach an agreement on the Grand Ethiopian Renaissance Dam.

US Secretary of Treasury Steven Mnuchin will preside over the talks and David Malpass, president of the World Bank, will take part, the sources confirmed.

The US has hosted several rounds of talks between the parties since November, to try to reach an agreement on the $4.5 billion hydroelectric dam that Ethiopia is building on the Nile and that Egypt considers an “existential threat.”

Cairo has asked Washington to mediate.

2. For ETHIOPIA, give the following information:

3. a) list the who, what, where and when of the news item
b) What are Egypt’s main concerns with the Grand Ethiopian Renaissance Dam?
c) What is Egypt asking Ethiopia to do?
d) How has Ethiopia responded to Egypt’s demands?
e) Why is the Sudan much better off than Egypt in regards to water?
f) The three countries’ ministers participating in talks in Washington mediated by the U.S. The National reports that Egypt had asked the U.S. to mediate. What is your reaction to Egypt asking, and the other two countries also agreeing, to hold the talks over the Dam dispute in the U.S.? — Ask a parent the same question.

Read a Jan. 2018 article on Egypt, Ethiopa and the Grand Ethiopian Renaissance Dam.