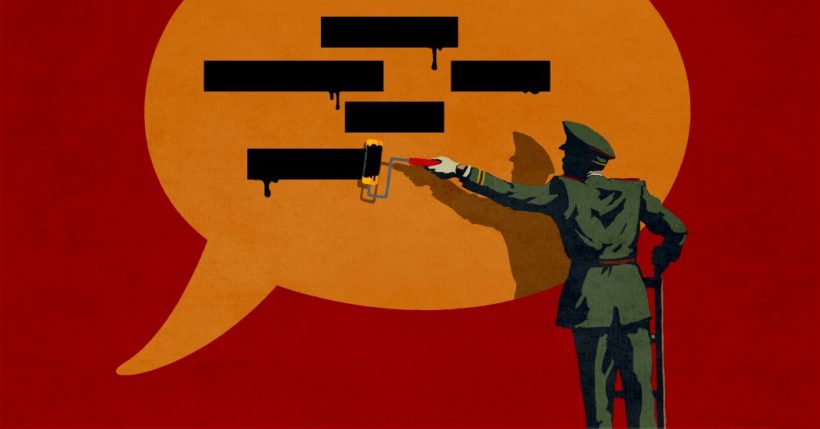 (by Chris Jewers, UK Daily Mail) — China has launched a new app that will allow citizens to report others who criticize the ruling Chinese Communist Party or question its account of history online.

Released by China’s cyber regulator, along with a similar hotline, the app aims to crack down on “historical nihilists” ahead of the Communist Party’s 100th anniversary in July, the regulator said in a statement on Friday.

An arm of Cyberspace Administration of China (CAC) said the app and hotline will allow and encourage citizens to report fellow internet users who spread “mistaken opinions” online in order to create a “good public opinion atmosphere.”

Such offenses would include “distorting” the [Communist] Party’s history, criticizing its leadership and policies, defaming national heroes and “deny the excellence of advanced socialist culture” online, the notice said.

“For a while now, some people with ulterior motives… have spread historically nihilistic false statements online, maliciously distorting, slandering and denying Communist Party, national and military history in an attempt to confuse people’s thinking.”

“We hope that the majority of Internet users will actively play their part in supervising society … and enthusiastically report harmful information,” it said.

“Historical nihilism” is a phrase used in China to describe public doubt and scepticism over the Chinese Communist Party’s description of past events.

China’s internet is tightly censored and most foreign social media networks, search engines and news outlets are banned in the country.

The notice did not specify what punishments would be dealt to people who are reported through the hotline.

Citizens in China already face jail time and other legal punishments for posting content that is critical of the  county’s [Communist] leadership, policies and history.

Legal amendments released earlier this year stipulate that people who “insult, slander of infringe upon” the memory of China’s Communist national heroes and martyrs face jail time of up to three years. …

According to a New York Times report in February, a public spreadsheet detailing speech crimes in China shows over 2,000 times when the Chinese government punished people for what they said online and offline over the past eight years.

The spreadsheet also links to publicly issued verdicts, police notices and official news reports, but is far from complete, with most punishments not made public.

Crimes listed on the spreadsheet range from people punished for what they said about the coronavirus pandemic and China’s response to it, the clash between Chinese and Indian soldiers last year, to others who criticized police officers.

The person behind the spreadsheet told The Times that his name is Wang, but remained anonymous out of fear of retribution from the Chinese government.

He started the spreadsheet in 2019, and is active online “collecting and exposing cases that China violates citizens’ rights of speech freedom.”

“I knew that there were speech crimes in China, but I’ve never thought it’s so bad,” Mr. Wang posted on his Twitter account in August. “Big Brother is watching you. I tried to look for the eyes of Big Brother and ended up finding them everywhere.”

Published by UK Daily Mail on April 19, 2021. Reprinted here for educational purposes only. May not be reproduced on other websites without permission.

2. What event is taking place in China in July?

3. Who is the Communist Party specifically targeting with the app they are launching?

4. For what reason does the Communist Party claim they are asking people to report fellow internet users who criticize the China’s communist leaders or their version of Chinese history?

5. What punishment are people already subjected to for voicing opinions critical of the Communist party leaders…?

6. What response do you think Democratic countries should have toward this latest Big Brother move by Xi Jinping, and the Chinese Communist Party’s mass censorship and absolute control over its 1.4 billion citizens? Explain your answer.

7. The Chinese Communists are attempting to censor “mistaken opinions” – in other words – truth they don’t want anyone to hear.

In the U.S.,  Twitter, YouTube and other social media sites censor factual news reports that show progressives in a critical light, claiming them to be false – as well as removing/blocking opinions that do not support the progressive narrative on any given subject.
One example, see “Twitter locks out journalist over tweet criticizing marxist BLM founder”

What do you think of American social media’s censorship? (Ask a parent what they think about social media censorship of some conservatives’ viewpoints.)

…Because of the Chinese government’s oppressive internet censorship, everything Chinese citizens see is restricted and controlled.

To enforce censorship and promote the Chinese Communist Party’s views, the government employs “tens of thousands of individuals at the national, provincial, and local levels to monitor electronic communications and online content,” according to the State Department’s Human Rights Report. That monitoring includes reviewing personal letters, telephone calls, social media postings and online news and advertising.

What can’t you view or talk about in China? Here are just a few examples of words and phrases that are currently or have been censored by Beijing.

“China’s Communist Party is building a surveillance state unlike anything the world has ever seen,” Vice President Pence said at the Wilson Center in October. Censorship is the “hallmark of [China’s] regime.”

(The above excerpt is from a Nov. 2019 article “In China, you can’t say these words” posted at the U.S. State Department’s Share America website)