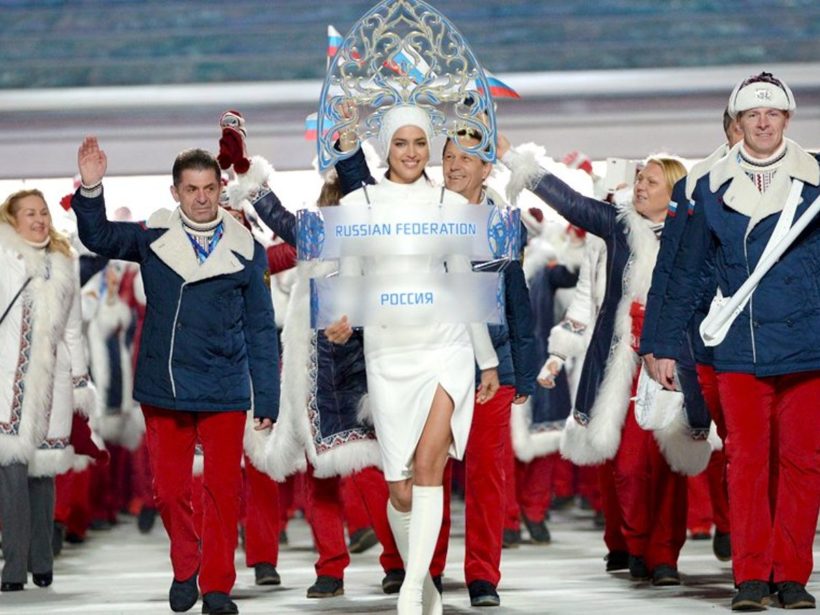 (by Tom Schad, USA Today) – [Russia was banned from the Olympics and world championships in a range of sports for four years on Monday after the World Anti-Doping Agency (WADA) ruled to punish it for manipulating laboratory data, a WADA spokesman said.]

The Russian flag and anthem will again be absent from the Olympic Games next summer after the ruling handed down by the World Anti-Doping Agency.

WADA’s 12-member executive committee voted unanimously to implement a four-year international sports ban on Russia, a punishment that had been proposed by its compliance review committee last month after WADA investigators found that the country tampered with drug-testing data earlier this year.

Russia’s anti-doping agency, RUSADA, will have three weeks to appeal WADA’s decision and is expected to do so. The Court of Arbitration for Sport would be responsible for hearing an appeal.

The move will effectively prevent Russia from having any formal presence at both the 2020 Summer Games in Tokyo and the 2022 Winter Games in Beijing, though Russian teams and athletes will still be allowed to compete as long as they are not linked to positive doping tests or the data tampering case. At the 2018 Winter Games in Pyeongchang, Russian athletes competed under a neutral flag as “Olympic Athletes from Russia.”

WADA president Craig Reedie said in a statement that Monday’s decision illustrated the agency’s desire to “act resolutely in the face of the Russian doping crisis.”

“For too long, Russian doping has detracted from clean sport,” Reedie said. “The blatant breach by the Russian authorities of RUSADA’s reinstatement conditions, approved by the (executive committee) in September 2018, demanded a robust response. That is exactly what has been delivered today.”

Some stakeholders, however, criticized WADA’s punishment for not being strong enough. They argued that Russian athletes should be banned from international competition entirely, and not allowed to participate even under a neutral flag.

“To allow Russia to escape a complete ban is yet another devastating blow to clean athletes, the integrity of sport and the rule of law,” U.S. Anti-Doping Agency CEO Travis Tygart said in a statement. “And, in turn, the reaction by all those who value sport should be nothing short of a revolt against this broken system to force reform.”

Russia’s [integrity] has long been [questioned] amid a series of doping scandals that are believed to date back at least to the 2012 Olympics in London. Most notably, a WADA-sponsored investigation found in 2016 that more than 1,000 Russian athletes were involved in state-sponsored doping. During the 2014 Olympics in Sochi, Russia,  investigators found that Russian agents helped swap dirty urine samples for clean ones by swapping them through a hole in the wall.

As a result of the doping violations, WADA deemed RUSADA to be non-compliant with its code and suspended the Russian anti-doping agency. Then, after being granted conditional reinstatement in 2018, Russia’s attempts to deceive WADA continued.

When WADA requested drug-testing data from a lab in Moscow, it found that the data had been removed, altered or “fabricated in an effort to hamper the work of WADA investigators.” One of the suspected goals of the data tampering was to shift blame away from the Russian government and toward Grigory Rodchenkov, who used to oversee the country’s doping program before becoming a whistle blower.

This latest incident, combined with the doping violations before it, led to the punishment that was endorsed by WADA’s executive committee Monday — which, in addition to the Olympic Games, will span across other “major events,” including world championships organized or sanctioned by a signatory to WADA’s code.

“There is a whole generation of clean athletes who have painfully abandoned their dreams and lost awards because of Russian cheaters,” Rodchenkov said in a statement. “We need to take the strongest action to bring justice back to sport.”

The punishment issued by WADA will also prevent Russian officials or representatives from attending any of the events, and preclude Russia from hosting or bidding to host a “major event.” WADA said Russia isn’t allowed to bid for the Olympic and Paralympic Games in 2032 “irrespective of whether the bidding takes place during or after” the four-year ban.

Jonathan Taylor, the chair of WADA’s compliance review committee, said in a statement that the goal of the sanctions was to be tough on Russia without “punishing the innocent.”

“While I understand the calls for a blanket ban on all Russian athletes whether or not they are implicated by the data, it was the unanimous view of the (compliance review committee), which includes an athlete, that in this case those who could prove their innocence should not be punished,” Taylor said.

Contributing to this story: The Associated Press.

Published by USAToday .com on December 9, 2019. Reprinted here for educational purposes only. May not be reproduced on other websites without permission from USA Today.

2. For RUSSIA:
a) list the who, what, where and when of the news item
b) For what reasons did WADA ban Russian athletes from world games? Be specific.
c) What effect will WADA’s ruling have on Russian athletes – and on Russian officials? Be specific.
d) What is the U.S. response to WADA’s ruling?
e) Re-read paragraphs 14-17. With whom do you agree: former head of Russia’s doping program, turned whistle blower, Grigory Rodchenkov or Jonathan Taylor of WADA? Explain your answer.