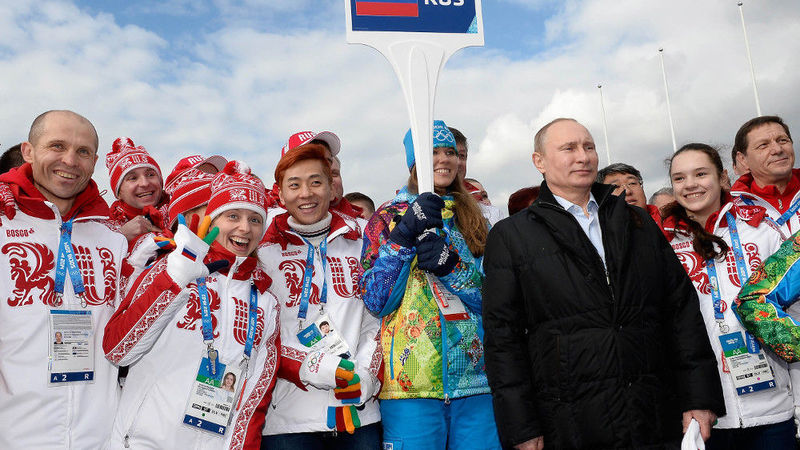 Russian President Vladimir Putin poses with athletes during a visit to the Olympic village in Sochi, Russia during the 2014 Winter Olympics.

(by Chris Perez, NY Post, Dec. 5) – The International Olympic Committee on Tuesday (Dec. 5) banned Russia’s Olympic Team from competing in the 2018 Winter Olympics in South Korea and imposed a $15 million fine over its doping scandal.

Russian athletes will still be allowed to compete in their individual sports in Pyeongchang, but won’t be allowed to display their country’s flag or colors.

They will not wear Russian uniforms nor will their anthem be played if they win gold. They simply will be referred to as “Olympic Athletes from Russia.”

In order to compete, the athletes will have to pass drug tests and be approved by an IOC (International Olympic Committee) panel.

The punishment comes three years after the Russians were busted tampering with more than 100 urine samples at the 2014 Sochi Games in a bid to conceal rampant steroid use.

Dozens of athletes, several of whom won medals, took part in the state-run doping scheme, which had been in the works for years.

In the dark of night, Russian scientists swapped out hundreds of urine samples, using a secret hole in a wall to pass the bottles back and forth. Russia won the most medals at the Games that year, 33. The United States placed fourth, with 28.

It wasn’t until 2016 that the scheme was revealed by Dr. Grigory Rodchenkov, the former head of Moscow’s anti-doping lab.

While some Russians are expected to take part in the Olympics in February, the country is reportedly weighing a total boycott.

As of Monday, 25 Russians had been disqualified from the Sochi Games and banned from the Olympics for life, and 11 medals were stripped. One Russian was cleared.

Deputy Prime Minister Vitaly Mutko, who was permanently banned from the Olympics for his role in the scandal, remains head of the nation’s organizing committee for soccer’s 2018 World Cup, which will be held in Russia.

The absence of Russia is likely to make an already- bleak Olympic hockey tournament even less appealing.

The U.S. National Hockey League (NHL) announced earlier this year that its players will not compete.

2. For RUSSIA:
a) list the who, what, where and when of the news item
b) How will some Russian athletes still be able to compete at the 2018 Winter Olympics? Be specific.
c) What did Russia do that led to the ban?
d) The IOC decision followed a conclusion that members of the Russian government came up with a system aimed to ensure Russian competitors could dope at the 2014 Winter Olympics in Sochi, Russia, without getting caught. The lead IOC investigator said the doping scheme “caused unprecedented damage to Olympism and to sports.” What do you think – what is your reaction to the Russian doping scheme?

This ban was a long time coming. The McLaren Report, released in two parts by the World Anti-Doping Agency in July and December 2016, detailed the doping and subsequent cover-up by the Russian state. It started as far back as 2011 and involves at least the 2012 Olympics in London and the 2014 Olympics in Sochi, though the IOC panel was only asked to rule on the doping that occurred during the 2014 Olympics. Over 1,000 athletes were involved.

The doping, and the hiding of the doping, were extensive:

At one point, small rods were used to pry open the sealed tops of urine testing containers, fluids were switched and the caps replaced, with the containers being exchanged through small holes in a wall of the lab where athlete urine samples were kept. Russian officials would add substances like salt to the clean, switched urine samples to make them appear more real. This is just the tip of a very elaborate iceberg of doping and cover-ups.

On top of that, according to the World Anti-Doping Agency, Russia’s anti-doping organization (Rusada) was not compliant with WADA’s rules as of last month. (by Liz Roscher, Yahoo Sports, Dec. 5)