A Chinese fishing vessel is anchored next to Filipino fishing boats at the disputed Scarborough Shoal April 6, 2017. Reuters

(Reuters) — The Philippine foreign minister [same as U.S. Secretary of State] on Monday demanded in an expletive-laced message on Twitter that China’s vessels get out of disputed waters, marking the latest exchange in a war of words with Beijing over its activities in the South China Sea.

The comments by Teodoro Locsin, known for making blunt remarks at times, follow Manila’s protests for what it calls the “illegal” presence of hundreds of Chinese boats inside the Philippines 200-mile Exclusive Economic Zone (EEZ).

“What are you doing to our friendship? You. Not us. We’re trying. You. You’re like an ugly oaf forcing your attentions on a handsome guy who wants to be a friend; not to father a Chinese province…”, Locsin said.

China’s embassy in Manila did not immediately respond to a request for comment. Chinese officials have previously [claimed] the vessels at the disputed Whitsun Reef were Chinese fishing boats taking refuge from rough seas.

China claims [ownership of] almost the entire South China Sea, through which about $3 trillion of ship-borne trade passes each year. In 2016, an arbitration tribunal in The Hague* ruled that the claim, which Beijing bases on its old maps, was inconsistent with international law. [*The Hague in the Netherlands hosts The International Court of Justice, the main judicial arm of the United Nations, as well as the International Criminal Court].

Philippine officials believe the Chinese vessels are manned by militia.

On Sunday, the Philippines vowed to continue maritime exercises in its EEZ (Exclusive Economic Zone) in the South China Sea in response to a Chinese demand that it stop actions it said could escalate disputes.

As of April 26, the Philippines had filed 78 diplomatic protests to China since President Rodrigo Duterte took office in 2016, foreign ministry data shows.

“Our statements are stronger too because of the more brazen nature of the activities, the number, frequency and proximity of intrusions,” Marie Yvette Banzon-Abalos, executive director for strategic communications at the foreign ministry, said.

Duterte for the most part has pursued warmer ties with China in exchange for Beijing’s promises of billions of dollars in investment, aid and loans.

“China remains to be our benefactor. Just because we have a conflict with China does not mean to say that we have to be rude and disrespectful,” Duterte said in a weekly national address.

“So, kindly just allow our fishermen to fish in peace and there is no reason for trouble,” Duterte said, addressing China.

Published by Reuters on May 3, 2021. Reprinted here for educational purposes only. May not be reproduced on other websites without permission.

NOTE: Before answering the following questions, read information under “Background” and “Resources” below.

2. What accusation did the foreign minister make against China’s coast guard?

3. What does China claim the boats are doing in Philippine waters?

5. For what reason are Philippine officials especially concerned about the Chinese boats currently in their waters?

6. Marie Yvette Banzon-Abalos of the Philippines foreign ministry defended Mr. Locsin’s tweets by explaining, ”Our statements are stronger too because of the more brazen nature of the activities, the number, frequency and proximity of intrusions [of China].“ Consider the info under “Background” and “Resources.”
a) Based on this information and what you know about the Communist leaders of China, what do you think? Are these just innocent Chinese fishing boats? Explain your answer.
b) What is your reaction to Mr. Locsin’s tweet? How effective do you think it will be? 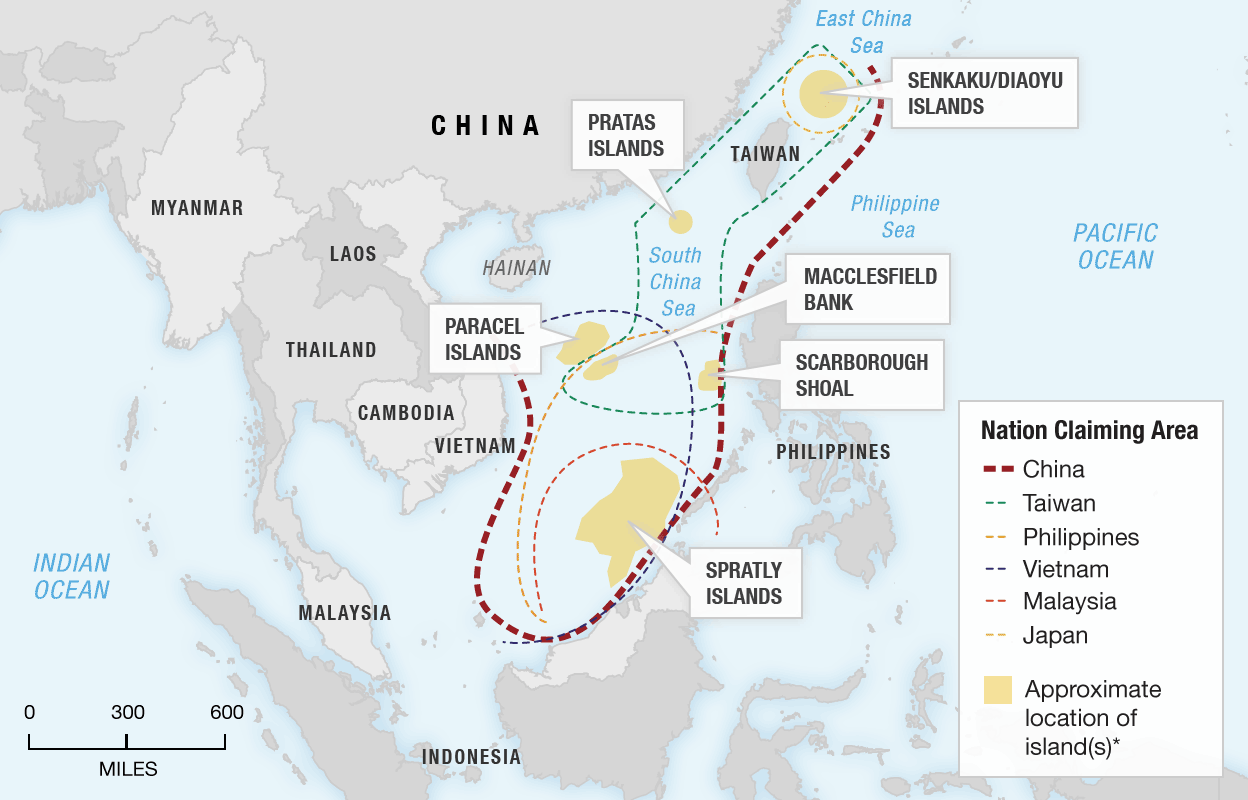 Since 2014, China has forged ahead with island-building in the disputed waters of the South China Sea, despite a landmark ruling in 2016 by the Permanent Court of Arbitration in The Hague, which said there was no legal basis for China’s maritime claims.

High-resolution aerial images of China’s reclamation efforts in the Spratly Islands show that the reefs and sandbars have been turned into island fortresses, with ports, air strips, lighthouses, hangars and multi-story buildings.

“I do not think it’s too late to forestall further militarization, but I think we need to have a comprehensive — and not just a military — strategy for how to deal with this.” (from a March 6, 2018 report at SND)

Read South China Sea at the Law of the Sea wikipedia entry.