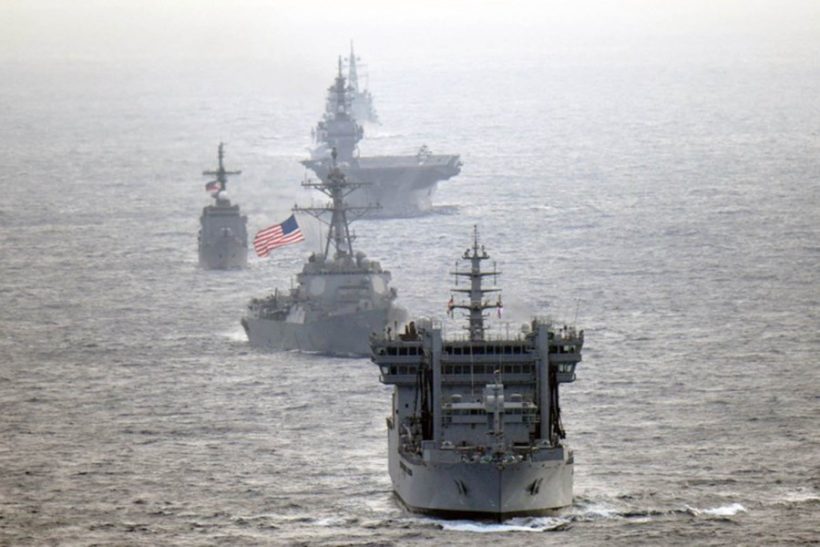 The USS William P. Lawrence, second in line, transited the South China Sea with vessels from the Indian and Philippine navies and the Japan Maritime Self-Defense Force during May 2-8, 2019.

(by Caitlin Doornbos, Stars and Stripes) – The U.S. on Wednesday finished a weeklong sail through the South China Sea with India, Japan and the Philippines, a region fraught with tension amid disputed territorial claims, according to a Navy statement Thursday.

The six vessels gathered “to train together and promote maritime cooperation throughout a free and open Indo-Pacific,” the Navy said in the statement.

The ships practiced “formation exercises, communication drills, passenger transfers and held a leadership exchange aboard JS Izumo” during the exercise, according to the statement.

The region is important to trade and rich in natural resources. Five nations — China, Malaysia, the Philippines, Vietnam and Taiwan — have overlapping claims to almost 70 reefs and islands in the South China Sea, according to the Center for Strategic and International Studies Asia Maritime Transparency Initiative.

The…exercise follows a U.S. request in December that its Pacific allies boost their military presence in the South China Sea. China continues to claim and militarize reefs and islands in the region, contrary to a 2016 decision by a United Nations tribunal.

China has created 3,200 new acres of land in the sea’s Spratly Islands since 2013, building artificial land masses for military outposts, according to the center.

Last year, China placed “anti-ship cruise missiles and long-range surface-to-air missiles on outposts in the Spratly Islands,” according to a report on China’s military power published last week by the U.S. Defense Department.

In response to the report, China Foreign Ministry spokesman Geng Shuang said at a press briefing Monday that “China pursues peaceful development and a defense policy that is defensive in nature,” according to a transcript.

Randy Schriver, assistant U.S. Secretary of Defense for Asian and Pacific affairs, in an interview with The Australian newspaper in December, proposed bringing more pressure on the Chinese by having “other partners and allies joining in these activities” in the South China Sea.

“If not freedom-of-navigation operations … just joint patrols, presence operations,” he added, according to The Australian.

Freedom-of-navigation operations challenge territorial claims and are often conducted by sending ships within 12 nautical miles of a disputed land mass.

“Professional engagements with our allies, partners and friends in the region are opportunities to build upon our existing, strong relationships, as well as learn from each other,” Klug said in the Navy statement.

JMSDF Rear Adm. Hiroshi Egawa, commander of Escort Flotilla 1, said the four-country exercise “built mutual understanding and trust” and “enhance[d] peace and stability in the Indo-Pacific region,” according to the Navy statement.

“The ability to do various exercises among four different navies smoothly demonstrated professionalism and high operational skills,” Egawa said in the statement.

2. What is the stated purpose for the unified sail through?

3. What did the the ships from the four countries do during the joint military venture?

5. What actions by China led the U.S. to request its Pacific allies to increase their military presence in the South China Sea?

6. How do you think the other governments involved regard the U.S.’s push to make their united presence felt? Since 2014, China has forged ahead with island-building in the disputed waters of the South China Sea, despite a landmark ruling in 2016 by the Permanent Court of Arbitration in The Hague, which said there was no legal basis for China’s maritime claims.

High-resolution aerial images of China’s reclamation efforts in the Spratly Islands show that the reefs and sandbars have been turned into island fortresses, with ports, air strips, lighthouses, hangars and multi-story buildings.

“I do not think it’s too late to forestall further militarization, but I think we need to have a comprehensive — and not just a military — strategy for how to deal with this.” (from a March 6, 2018 report at SND)

Read South China Sea at the Law of the Sea wikipedia entry.

China’s claims to the South China Sea stretch roughly 1,000 miles from its southern shores, pitting it against Taiwan, the Philippines, Brunei, Malaysia, and Vietnam (March 6, 2018)