World #2 – Japan to roll out red carpet for Trump 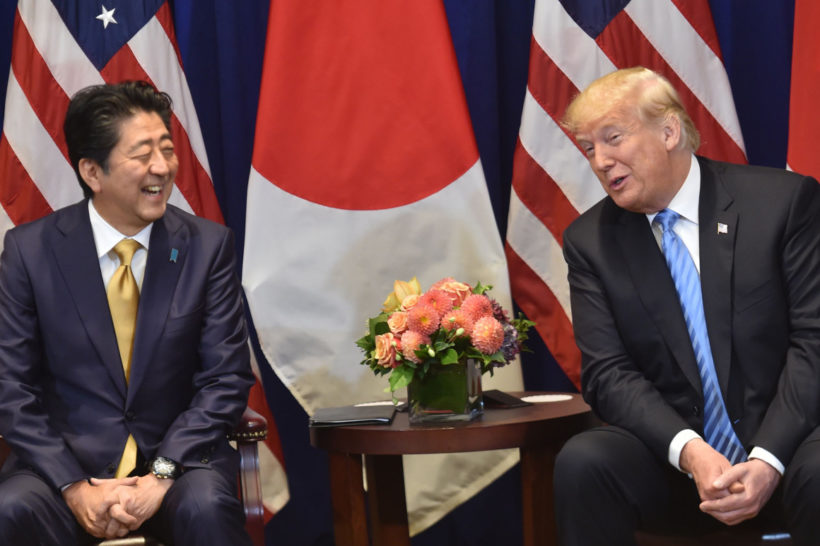 A government official working on the trip went to the Ryogoku Kokugikan sumo hall last week to arrange seating and security for Trump and Japanese Prime Minister Shinzo Abe. The two leaders are scheduled to attend the final day of the summer grand tournament Sunday.

The official secured seats in a masuseki box very close to the action. While these are typically outfitted with four seating cushions, this box will have chairs, as Trump is likely not used to sitting on the floor for such events.

At the end of the tournament, the president will present the winner with a custom-made U.S.-Japan friendship trophy, dubbed the “Trump Cup.”

Before the sumo matches, Trump will go on his now-usual golf outing with Abe. Tokyo plans to extend an invitation to professional golf veteran Isao Aoki, following a previous chat between the two leaders about Aoki’s duel with American Jack Nicklaus at the 1980 U.S. Open.

The heart of the trip will take place Monday, with a summit and Trump’s meeting with the new Emperor Naruhito, followed by a state banquet. [Interesting note: President Trump will be first foreign leader to officially meet with the new emperor, as well as the first president to meet with two emperors of Japan while in office: Emperor Akihito (who abdicated last month) and his son, Emperor Naruhito, who acceded to the throne on April 30.]

On Tuesday, Abe and Trump will go to the Yokosuka naval base to inspect an Izumo-class helicopter carrier. The ship is one of two that Japan plans to effectively convert into aircraft carriers capable of accommodating American-made F-35B stealth fighter jets. This final leg of the itinerary seems partly intended to remind Trump, who often complains about the U.S. trade deficit with Japan, about Tokyo’s planned F-35B purchases.

The extra work to make the president feel welcome is meant not only for his benefit, but also for Japan’s. The personal rapport between Abe and Trump is heightening Tokyo’s diplomatic influence.

Iranian Foreign Minister Mohammad Javad Zarif visited Japan last week, meeting with Abe and Foreign Minister Taro Kono, as Tehran hopes that Tokyo can play a mediator role amid its escalating tensions with Washington. While Japan and Iran have historically had friendly ties, Zarif likely opted for Japan over China specifically because of Trump’s trip.

The Tokyo Skytree, the city’s tallest structure, will be lit up in the American flag’s colors of red, white and blue during the state visit. But despite the efforts to create a welcoming atmosphere, security is expected to be tight.

The Tokyo Metropolitan Police Department will increase its presence at sites related to the trip, including the U.S. Embassy and the Imperial Palace. An emergency response team will be readied in case of a terrorist attack or other incident, and specialists will be stationed to handle suspicious drones.

President Trump will return to Japan in a few weeks for late June’s Group of 20 (G20) summit in Osaka.

Please Note: Daily posting and Answers emails will end for the school year on Tuesday, May 28th.

On April 26, 2019 President trump welcomed Japan’s Prime Minister Abe to the White House and spoke of his upcoming visit to Japan: