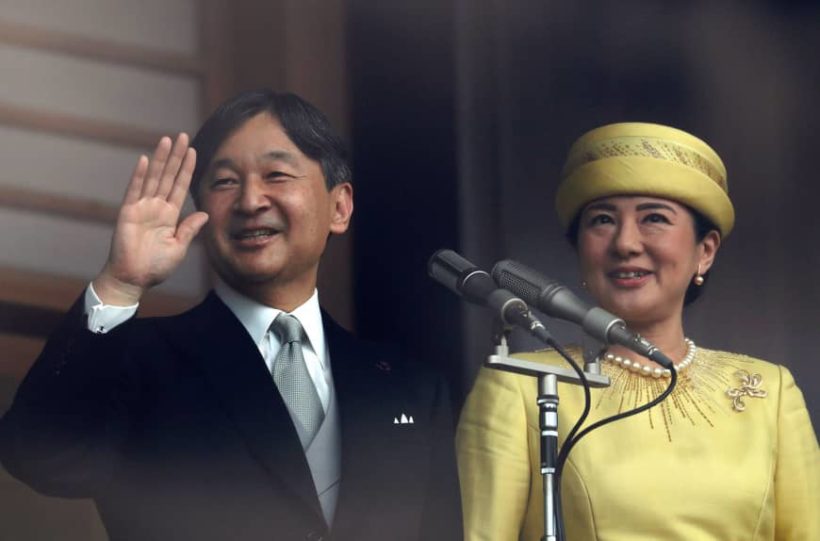 Japan's Emperor Naruhito and Empress Masako greet well-wishers during their first public appearance at the Imperial Palace in Tokyo, Japan May 4, 2019. Reuters/Issei Kato

(by Junko Fujita and Elaine Lies, Reuters) TOKYO -[More than 140,000 people gathered at Japan’s Imperial Palace to greet the new Emperor from 10 a.m. to 3 p.m. on Saturday, according to the Imperial Household Agency. The Emperor and his wife and other members of the imperial family made five-minute appearances once every hour.]

Cheers and screams filled the air as new Japanese Emperor Naruhito and Empress Masako made their first greetings to an ecstatic public three days after acceding to the throne following the first abdication in two centuries.

Naruhito’s father, Akihito, 85, abdicated on Tuesday in a simple ceremony, nearly three years after he first expressed fears that advancing age might make it difficult for him to perform his duties. It was the first abdication from the Chrysanthemum Throne in 200 years.

[The former emperor and former empress Michiko, who have retired from all official duties, did not take part in the events, according to the Imperial Household Agency.]

Pledging to work as a symbol of the people, Naruhito, 59, was formally invested as emperor the day after his father’s abdication. People queued for hours to see the new emperor and his family stand on a palace balcony and wave to the gathered crowds. Normally such greetings take place during the New Year’s holiday and on the emperor’s birthday.

[The emperor, born in 1960, is the first to never have experienced war. Empress Masako is a former diplomat and Harvard University graduate, fluent in French and English, who spent some of her formative years in Moscow, New York and Boston.

“We’ve never had a bilingual imperial couple with no memory of or connection to World War II,” said Tokyo resident Setsuko Okada, 84, who attended the greeting. “Or any war for that matter, at least, not directly.”]

“I pray for your health and happiness,” said the emperor, reading prepared remarks. “And I sincerely wish for further development of our nation by going hand in hand with other nations and seeking global peace.”

Masako, wearing a yellow dress and hat, waved and smiled to the crowds along with other imperial family members. They greeted the crowds six times on Saturday, according to public broadcaster NHK.

Akihito became emperor in 1989 after the death of his father, Emperor Hirohito, which set off an extended period of mourning throughout Japan, but the mood has been completely different this time.

Clubs held countdowns on Tuesday night, fireworks rocketed into the air and stores held special sales to honor “Reiwa,” the era name under which Naruhito will reign. Hundreds of couples rushed to city offices to register their marriage.

[The Imperial Household Agency had initially planned to allow commoners to make congratulatory visits after a key ceremony on October 22 to proclaim the enthronement.

But the agency decided to bring the greetings forward as Japan’s traditional Golden Week holiday period has been extended to 10 days this year, from April 27 through May 6, to incorporate the historic imperial transition.]

Published by Reuters on May 5, 2019. Reprinted here for educational purposes only. May not be reproduced on other websites without permission from Reuters.

2. For JAPAN:
a) list the who, what, where and when of the news item
b) For what reason did Naruhito’s father Akihito abdicate the throne?
c) Who was Naruhito’s grandfather? What was the significance of his reign?
d) What is significant about the new Emperor and Empress?
e) Today, the role of Emperor is largely ceremonial and the emperor is barred from making any political statements. Why do you think the Emperor is important to the people of Japan?

CHALLENGE: President and Mrs. Trump will pay a state visit to Japan in late May, becoming Emperor Naruhito’s first official foreign guests, the Japanese Ministry of Foreign Affairs said in a press release. Trump’s trip will be the first state visit of a foreign leader in what will be known as Japan’s Reiwa era. The president and First Lady will attend a banquet hosted by Emperor Naruhito and his wife, Empress Masako, and will also meet Japanese Prime Minister Shinzo Abe.
In a statement from the White House, a press secretary said that Trump’s planned visit to Japan would “deepen the close bonds” between the Japanese and American people, and “highlight the continued importance of our alliance and partnership.”
What is the date of the Trumps’ trip to Japan? During the trip, check out the White House youtube page for video reports from Japan.

Why is the Japanese monarchy important?

It’s the oldest continuing hereditary monarchy in the world. Legends date it back to about 600 BC.

In fact, Japanese emperors used to be seen as gods, but Emperor Hirohito – Naruhito’s grandfather – publicly renounced his divinity at the end of World War Two, as part of Japan’s surrender.

Today, the role is largely ceremonial and the emperor is barred from making any political statements.

Emperor Akihito is seen as having redefined the role, helping to repair the damage to Japan’s reputation after WWII.

Previous emperors rarely interacted with the public, but Akihito broke down the barrier between the royals and the people – and came to be known for his compassion.

He also took up the role of a diplomat, becoming an unofficial ambassador for Japan and travelling abroad extensively – Naruhito is expected to continue this.

Akihito will now be known as “Joko,” which means “grand emperor,” and by the English title “Emperor Emeritus,” while his wife Michiko will be “Empress Emerita.” (from BBC News)

The new Emperor and Empress reportedly met at a tea party and married in 1993.

Empress Masako was educated at Harvard and Oxford, and had a promising career as a diplomat before her marriage.

Masako later told reporters that she had accepted Naruhito’s proposal after he said: “You might have fears and worries about joining the imperial household. But I will protect you for my entire life.”

They have one child, Princess Aiko, who was born in 2001. Japanese law prohibits women from inheriting the throne. (from BBC News)

Watch a news report from Japan (in Japanese):