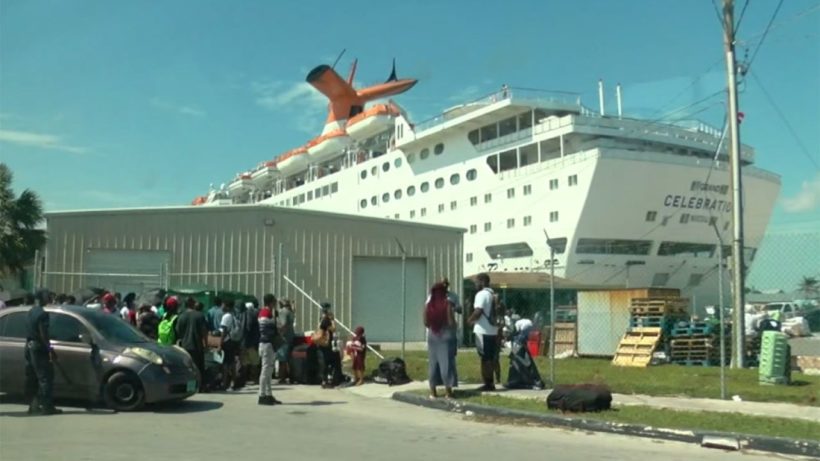 In order to provide aid, the Grand Celebration, a Bahamas Paradise Cruise Line ship, spent 24-hours in Freeport assisting Bahamian residents. The ship then returned from their trip on Saturday, docking at the Port of Palm Beach.

(by Erik Bojnansky, Reuters) – Hundreds of weary Bahamians, some carrying small bags of belongings and children on their hips, disembarked a cruise ship in south Florida on Saturday after fleeing the catastrophic devastation left by Hurricane Dorian.

The evacuees arrived at the Port of Palm Beach after an all-night voyage on the Grand Celebration, a cruise ship operated by Bahamas Paradise Cruise Line, which offered free passage to the U.S. to a limited number of Bahamians.

“I feel lost between a rock and a weary line but I guess I will make it through,” said Thomas Stubbs soon after he got off the ship.

The 42-year-old owner of an air conditioning and refrigeration business in Freeport said he will gather building supplies and return to that city in the next few days to help repair the homes of about 50 family and friends. 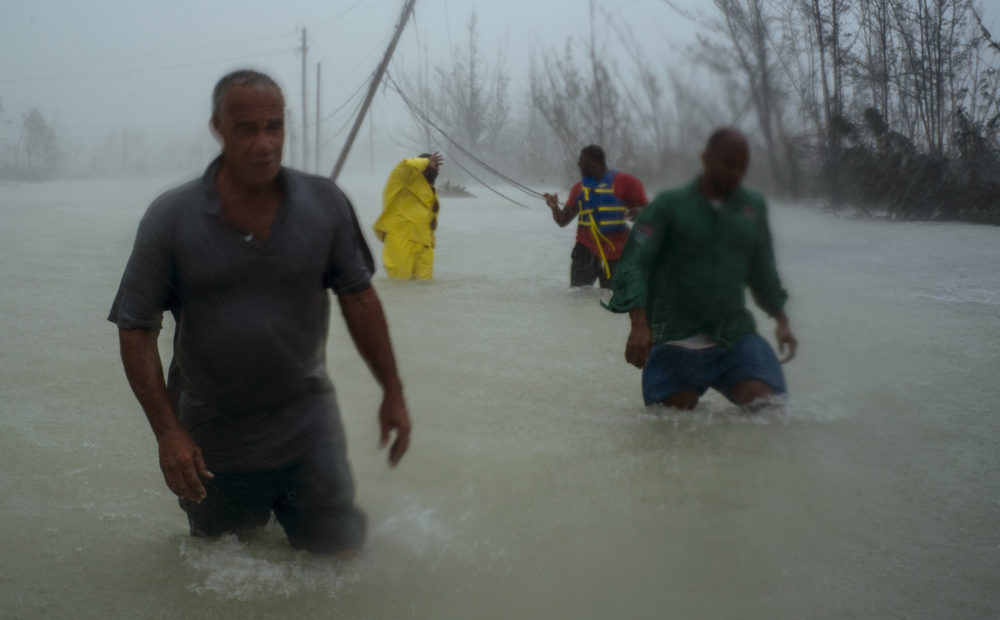 Volunteers wade through a road flooded by Hurricane Dorian as they work to rescue residents near the Causarina bridge in Freeport, Grand Bahama, Bahamas, Tuesday, Sept. 3, 2019. The storm devastated thousands of homes, crippled hospitals and trapped people in attics. (AP Photo/Ramon Espinosa)

Stubbs was one of about 1,100 evacuees who made the 72- nautical-mile journey from Freeport. Thousands had tried to get on board.

Lanell Andrews, 30, arrived with her one-year-old twins who rode in a double stroller.

“We had to do what we had to do. You had to leave,” said Andrews, who will drop off her children with relatives and return to help rebuild her water-damaged home with her husband who remained in Freeport.

“One step at a time,” she said. “We are just trying what we can do and hope for the best.”

Hurricane Dorian, the most powerful hurricane on record to hit the Bahamas, parked itself over part of the archipelago for almost two days earlier [last] week, pummeling it with Category 5 winds, with some gusts topping 200 miles per hour. 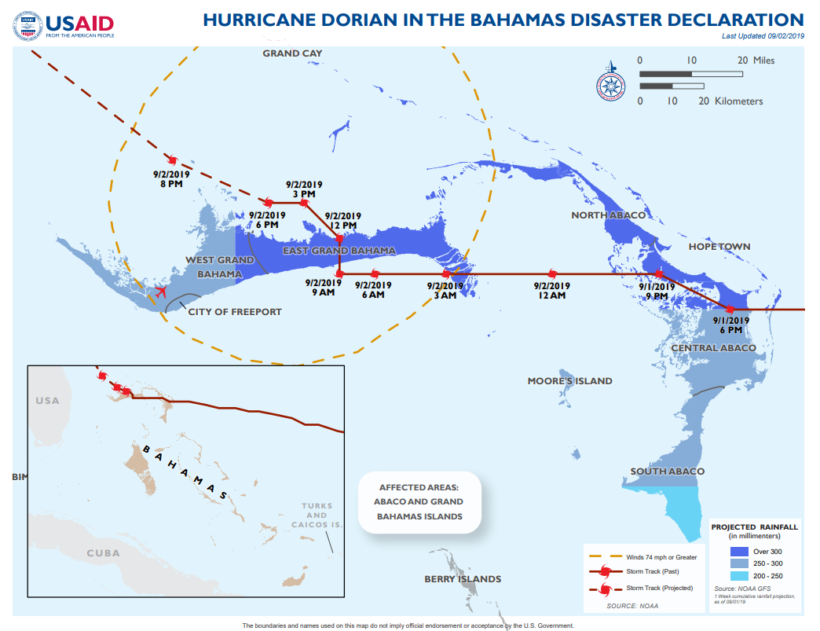 Bahamas leaders believe hundreds and perhaps thousands are missing in the nation of about 400,000 people. The official death toll, which stood at 43 on Friday, was expected to rise sharply.

Sophia Morley, a 47-year-old guidance counselor employed by the ministry of education, arrived with her 15-year-old daughter and 74-year-old mother who is blind in one eye and suffers from dementia. Morley wanted to leave her loved ones with friends or relatives in the area until her Bahamas home again has electricity and water. She was not sure where they will stay.

“I have more questions than answers,” Morley said. “We like certainty. But I believe it is going to be alright.”

Officials checked the evacuees’ passports and visa documents before they were allowed to board the cruise ship in Freeport. At the Port of Palm Beach, they were greeted by Immigration and Customs Enforcement agents, who again checked their documents.

They were also met at the port, located about 75 miles north of Miami, by friends, relatives, paramedics and volunteers. A row of blue buses stood ready to transport evacuees.

[The Miama Herald reported “Yaremi Farinas, a Port of Palm Beach public information officer, said that as of midday Saturday, none of the passengers disembarking had requested to be taken to a shelter. Instead, all of them had arranged for a family member or a friend to pick them up.]. 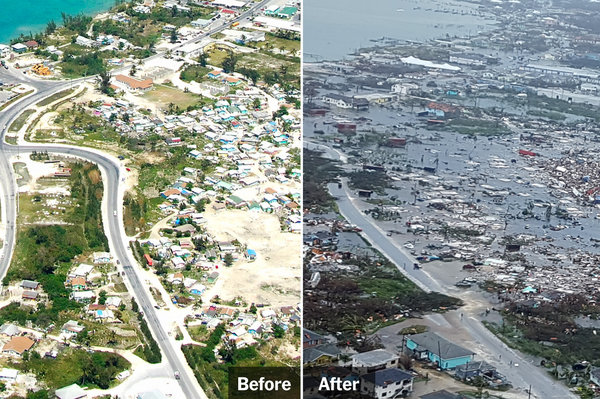 Published by Reuters on September 7, 2019. Updated Sept. 8 Reprinted here for educational purposes only. May not be reproduced on other websites without permission from Thompson Reuters.

2. For  THE BAHAMAS:
a) list the who, what, where and when of the news item
b) Where did the 1,100 people go after being brought to Florida by the cruise line?
c) For what reasons does it appear most came to Florida?
d) See the “Background” and “Resources” below the article. How is the U.S. responding to the aftermath of the hurricane in The Bahamas?
e) In addition to the Bahamian government, the U.S. government (through the U.S. Coast Guard and USAID), private companies (various cruise lines…) and private citizens – as well as religious groups like Samaritans Purse and others, are all assisting with rescue then relief and recovery. How does the assistance being given to those impacted by this devastating hurricane inspire/encourage you?

The U.S. Coast Guard has rescued 295 people in the Bahamas since Hurricane Dorian started pounding the islands.

Seven Jayhawk helicopters and five MH-65 dolphin helicopters are on continued search and rescue missions on the devastated islands of Grand Bahama and Abaco, the US Embassy in Nassau tweeted.

“They will continue working around the clock to rescue as many people as they can,” the embassy said. Bahamian security forces were organizing evacuations on a landing craft. Other boats, including yachts and other private craft, were also helping to evacuate people. (from a Sept. 7 NY Post article)

Royal Caribbean sends thousands of meals, supplies to the Bahamas
News4JAX on Sept. 7: