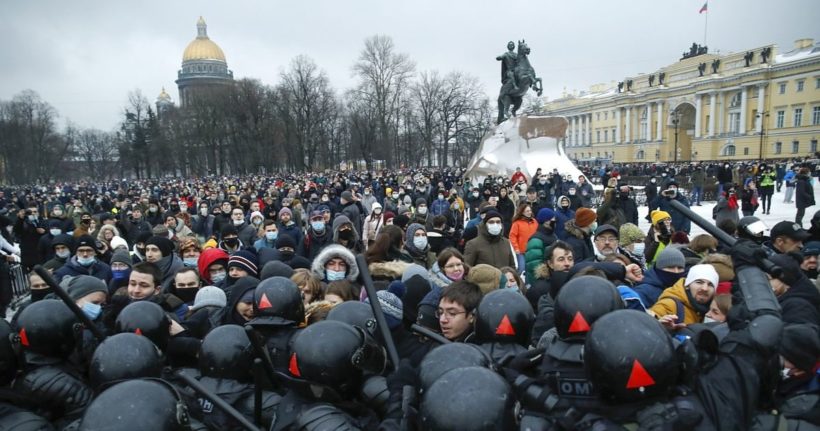 Alexei Navalny is a Russian opposition leader, politician, lawyer, and anti-corruption activist. He came to international prominence by organizing demonstrations and running for office to advocate reforms against corruption in Russia, president Vladimir Putin, and Putin’s government.

(Associated Press) — Chanting slogans against President Vladimir Putin, thousands of people took to the streets on Sunday across Russia’s vast expanse to demand the release of jailed opposition leader Alexei Navalny, keeping up the nationwide protests that have rattled the Kremlin. More than 5,000 people were detained by police, according to a monitoring group, and some were beaten.

The massive protests came despite efforts by Russian authorities to stem the tide of demonstrations after tens of thousands rallied across the country last weekend in the largest, most widespread show of discontent that Russia has seen in years. Despite threats of jail terms, warnings to social media groups and tight police cordons, the protests again engulfed cities across Russia’s 11 time zones on Sunday. 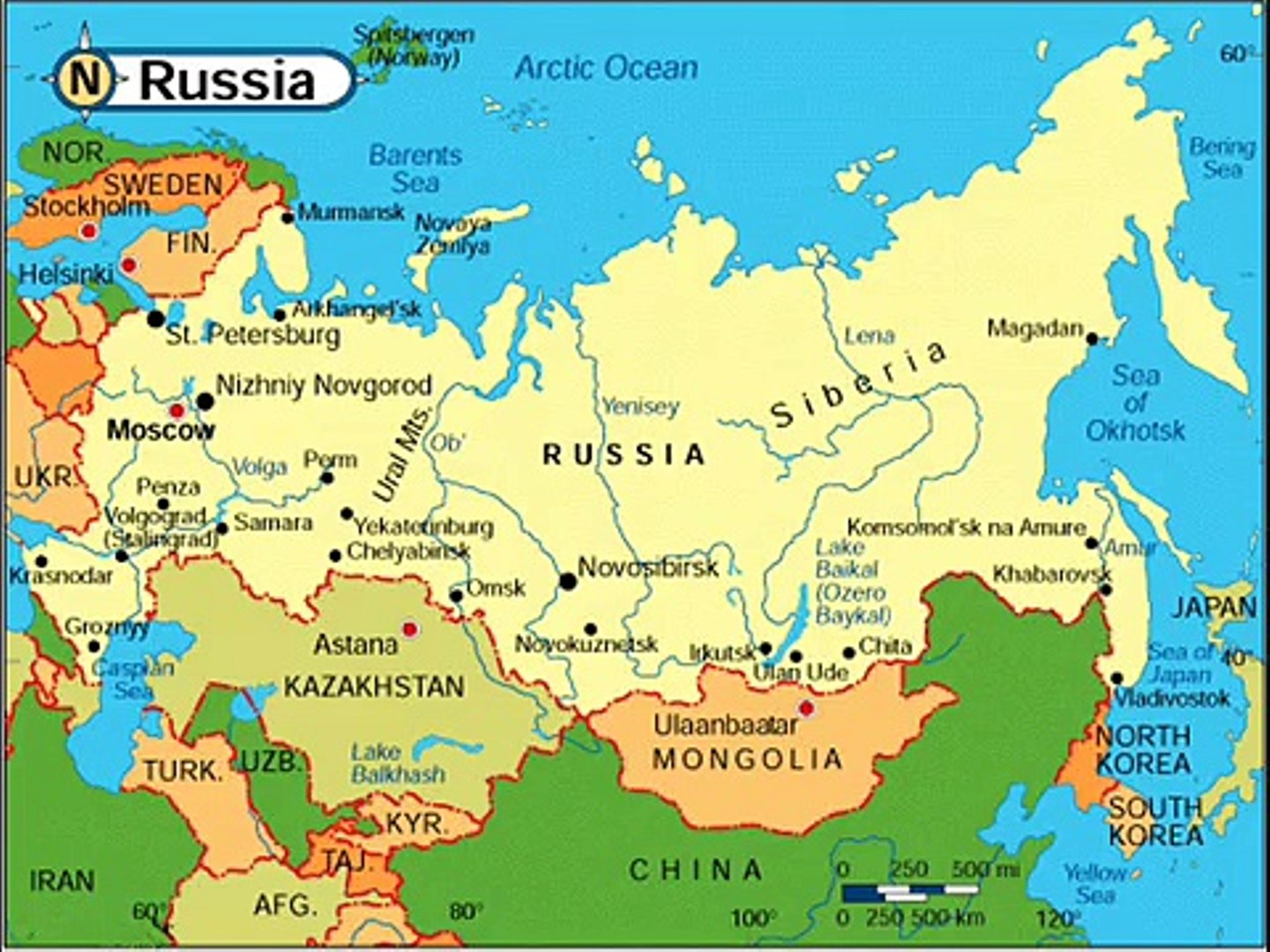 Navalny’s team quickly called another protest in Moscow on Tuesday, when he is set to face a court hearing that could send him to prison for years.

The 44-year-old Navalny, an anti-corruption investigator who is Putin’s best-known critic, was arrested on Jan. 17 upon returning from Germany, where he spent five months recovering from a nerve-agent poisoning that he blames on the Kremlin. Russian authorities have rejected the accusations. He was arrested for allegedly violating his parole conditions by not reporting for meetings with law enforcement when he was recuperating in Germany. 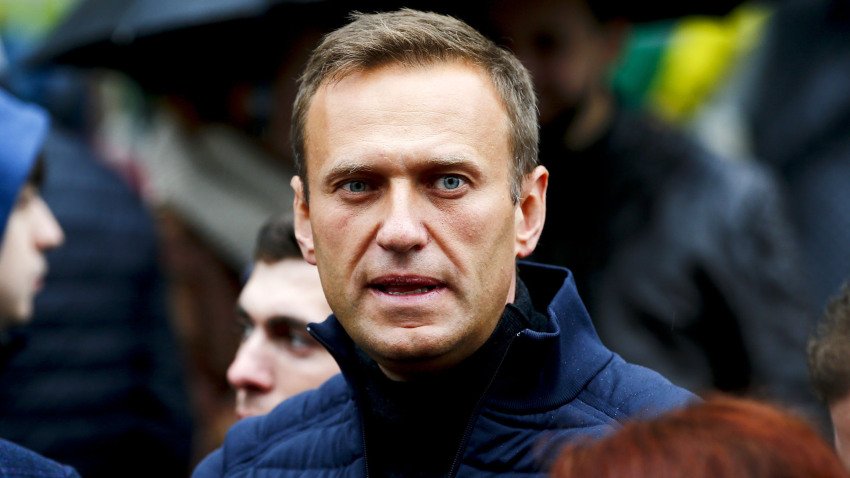 The United States urged Russia to release Navalny and criticized the crackdown on protests.

“The U.S. condemns the persistent use of harsh tactics against peaceful protesters and journalists by Russian authorities for a second week straight,” U.S. Secretary of State Antony Blinken said on Twitter.

The Russian Foreign Ministry rejected Blinken’s call as a “crude interference in Russia’s internal affairs” and accused Washington of trying to destabilize the situation in the country by backing the protests.

On Sunday, police detained more than 4,700 people at protests in cities nationwide, according to OVD-Info, a group that monitors political arrests, surpassing some 4,000 detentions at the demonstrations across Russia on Jan. 23.

Navalny’s team initially called for Sunday’s protest to be held on Moscow’s Lubyanka Square, home to the main headquarters of the Federal Security Service, which Navalny claims was responsible for his poisoning. Facing police cordons around the square, the protest shifted to other central squares and streets. 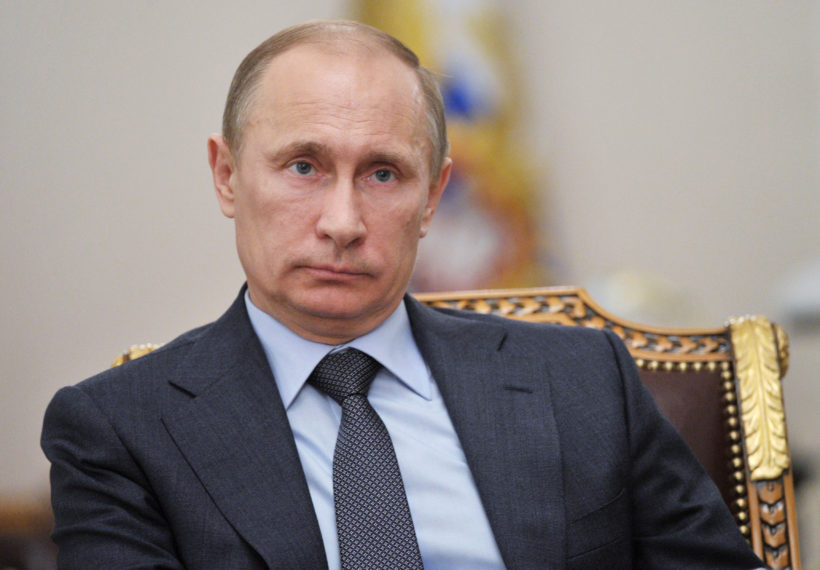 Police were randomly picking up people and putting them into police buses, but thousands of protesters marched across the city centre, chanting “Putin, resign!” and Putin, thief!” a reference to an opulent Black Sea estate reportedly built for the Russian leader that was featured in a widely popular video released by Navalny’s team.

“I’m not afraid, because we are the majority,” said Leonid Martynov, who took part in the protest. “We mustn’t be scared by clubs because the truth is on our side.”

At one point, crowds of demonstrators walked toward the Matrosskaya Tishina prison where Navalny is being held. They were met by phalanxes of riot police who pushed the march back and chased protesters through courtyards.

Demonstrators continued to march around the Russian capital, zigzagging around police cordons. Officers broke them into smaller groups and detained scores, beating some with clubs and occasionally using Tasers.

More than 1,600 people were detained in Moscow, including Navalny’s wife, Yulia, who was released after several hours pending a court hearing Monday on charges of taking part in an unsanctioned protest.

“If we keep silent, they will come after any of us tomorrow,” she said on Instagram before turning out to protest.

Amnesty International said that authorities in Moscow have arrested so many people that the city’s detention facilities have run out of space.

“The Kremlin is waging a war on the human rights of people in Russia, stifling protesters’ calls for freedom and change,” Natalia Zviagina, the group’s Moscow office head, said in a statement.

Several thousand people marched across Russia’s second-largest city of St. Petersburg, chanting “Down with the czar!” and occasional scuffles erupted as some demonstrators pushed back police who tried to make detentions. More than 1,000 were arrested.

Some of the biggest rallies were held in Novosibirsk and Krasnoyarsk in eastern Siberia and Yekaterinburg in the Urals.

“I do not want my grandchildren to live in such a country,” said 55-year-old Vyacheslav Vorobyov, who turned out for a rally in Yekaterinburg. “I want them to live in a free country.”

…As part of a multi-pronged effort by authorities to block the protests, courts have jailed Navalny’s associates and activists across the country over the past week. His brother, Oleg, top aide Lyubov Sobol and three other people were placed on Friday under house arrest for two months on charges of allegedly violating coronavirus restrictions during last weekend’s protests.

The Interior Ministry issued stern warnings to the public, saying protesters could be charged with taking part in mass riots, which carries a prison sentence of up to eight years.

Published by Associated Press on Feb. 1, 2021. Reprinted here for educational purposes only. May not be reproduced on other websites without permission.

2. What is Alexei Navalny know for?

3. Navalny’s team has called for another protest in Moscow on Tuesday. What is happening on that day?

4. How did the Biden administration respond to the beatings and arrests of thousands of Russians?

5. What security measures did authorities take prior to the demonstrations against President Putin?

6. What were protesters chanting during the rallies?

7. Leonid Martynov, who took part in the protest said, ”I’m not afraid, because we are the majority We mustn’t be scared by clubs because the truth is on our side.”

Navalny’s wife, Yulia, who was “detained” but released after several hours pending a court hearing on charges of taking part in an unsanctioned protest said, “If we keep silent, they will come after any of us tomorrow.”

On Jan. 28, the UK Guardian reported: On Thursday Leonid Volkov, a Navalny adviser, was charged with putting underage Russians in danger after recording a video calling for young Russians to come to last week’s protests.

Volkov, who is in Latvia, said the charges were false and meant to divert attention from the protests against Putin. Young people make up a growing part of Navalny’s support because of the opposition leader’s use of social media to share the findings of his investigations into Putin’s allies.

The AP reports, “Russia’s Interior Ministry issued stern warnings to the public, saying protesters could be charged with taking part in mass riots, which carries a prison sentence of up to eight years.”

What are your thoughts on how this might compare to what has been happening in the U.S. over the past year?

Who is Alexei Navalny?

More from the article above:

Protests were fueled by a two-hour YouTube video “Putin’s Palace: History of the world’s largest bribe” released by Navalny’s team after his arrest about the Black Sea residence purportedly built for Putin. The video has been viewed more than 100 million times, inspiring a stream of sarcastic jokes on the internet amid an economic downturn.

Russia has seen extensive corruption during Putin’s time in office while poverty has remained widespread.

“All of us feel pinched financially, so people who take to the streets today feel angry,” said Vladimir Perminov, who protested in Moscow. “The government’s rotation is necessary.”

Demonstrators in Moscow chanted “Aqua discotheque!” a reference to one of the fancy amenities at the residence, which also features a casino and a hookah lounge equipped for watching pole dances.  Putin says neither he nor any of his close relatives own the property. On Saturday, construction magnate Arkady Rotenberg, a longtime Putin confidant and his occasional judo sparring partner, claimed that he himself owned the property.

After recovering from being poisoned (allegedly by Putin’s order, though the Kremlin denies this claim) Navalny was arrested immediately upon his return to Russia earlier this month and jailed for 30 days at the request of Russia’s prison service, which alleged he had violated the probation of his suspended sentence from a 2014 money-laundering conviction that he has said is political revenge [a set-up].

On Thursday, a Moscow court rejected Navalny’s appeal to be released, and another hearing next week could turn his 3 1/2-year suspended sentence into one he must serve in prison.