World #1 – Iranian mother and daughter jailed for not wearing headscarves 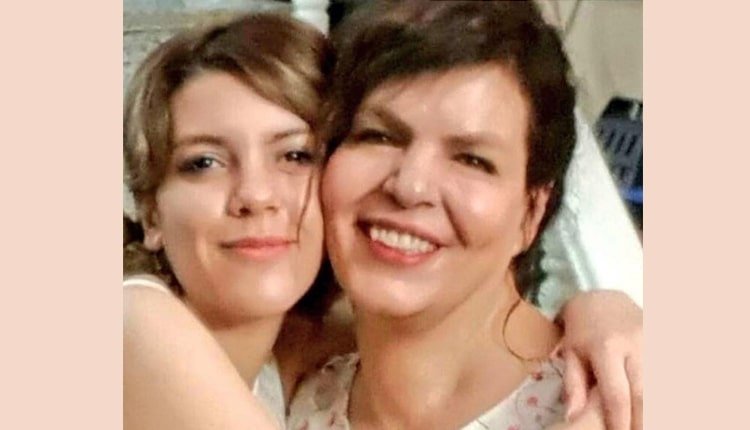 (Compiled from AP and AFP) — Activists laid flowers near the Iranian Embassy in Paris on Monday to show support for women’s rights campaigners sentenced to prison after handing out flowers to women on the Tehran metro while not wearing headscarves [on a women-only subway car. In Iran, women and men travel in separate train cars. Women are not permitted to enter the men’s cars].

Monday’s protest on a square near the embassy, organized by Amnesty International, was timed to mark International Women’s Day (March 8). It was also meant to show support for other activists fighting for human rights in Iran.

On International Women’s Day in 2019, Yasaman Aryani, her mother Monireh Arabshahi and Mojgan Keshavarz handed out flowers to female passengers on the Tehran metro and spoke of a day when women have the freedom to choose what they wear [as they did before the Islamic Revolution in 1979]. The activists were not wearing headscarves and posted a video showing the action that drew widespread attention. 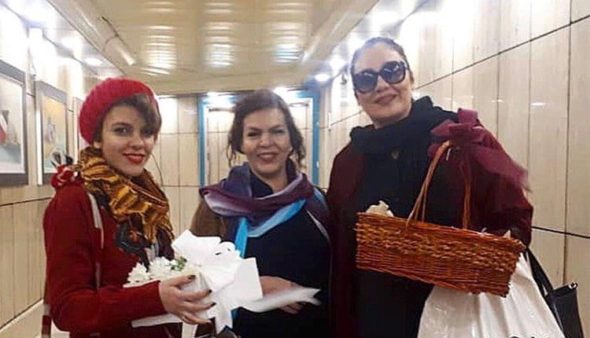 Yasaman Aryani, her mother Monireh Arabshahi and fellow activist Mojgan Keshavarz (left to right) were imprisoned by the Iranian regime for the “crime” of not wearing headscarves on a women-only subway car on International Women’s Day while handing out flowers.

Iran’s official Fars news agency in July 2019 cited the head of the Tehran Revolutionary Court as saying that “those who film themselves or others while removing the hijab and send photos to this woman … will be sentenced to between one and 10 years in prison,” the AP reported.

In August 2019, UN ‘experts’ on human rights in Iran released a statement saying the women “peacefully protested against Iran’s compulsory veiling laws and advocated for a woman’s right to choose whether or not to wear the hijab.”

According to the experts, who are independent and do not speak for the world body, the women were detained in April 2019, “forcibly disappeared” for up to two weeks, and denied access to a lawyer through the initial investigation.

“Their legal representatives were also reportedly prohibited from representing them at their trial,” the UN statement said.

Ms. Keshavarz has been sentenced to 23 and a half years in prison while Aryani and Arabshahi were both given 16-year terms.

All were convicted of national security violations, spreading anti-state propaganda and “encouraging and providing for [moral] corruption and prostitution,” the UN experts said.

Keshavarz was convicted of the additional crime of “insulting the sacred.”

Over recent years, dozens of Iranian women have been detained for protesting the mandatory wearing of the hijab. Several women’s rights activists also remain in prison, such as prominent Iranian human rights lawyer Nasrin Sotoudeh. She became known for defending activists, opposition politicians and women prosecuted for removing their headscarves.

“Twenty-four- year-old Yasaman Aryani is serving a lengthy prison sentence for campaigning against forced veiling. Her punishment is part of a wider crackdown in Iran on women who have stood up against discriminatory and degrading forced veiling laws.

Yasaman is among hundreds of prisoners of conscience jailed in Iran. Her sentence was recently reduced from 16 years to nine years and seven months’ imprisonment on appeal. But no one should spend a single day in prison for peacefully exercising their rights.”

Compiled from articles published by Agence FrancePresse at YahooNews on Aug. 16, 2019 and by Associated Press at YahooNews on March 8, 2021. Reprinted here for educational purposes only. May not be reproduced on other websites without permission.

2. What was the purpose of Amnesty International’s ‘protest’?

3. What did Yasaman Aryani, her mother Monireh Arabshahi and Mojgan Keshavarz do on International Women’s Day in 2019?

4. a) What prison sentence did each woman receive?
b) For what reason(s) were the women imprisoned by the Islamic government?

5. What 2-3 adjectives would you use to describe these three women, and the many others in Iran who risk such punishment?

6. In Western countries, some feminists fight for a woman’s “right” to be covered. What do you think women living under repressive regimes would tell/ask women living in democratic countries to do for them and their rights?

7. It was difficult to find any photos/video of the Paris protest – or about the 3 women. Why do you think this wasn’t a bigger news story?

Under the Pahlavi Dynasty:  The Pahlavi Shahs were the rulers of Iran between 1925 and 1979 and they introduced many reforms concerning women’s rights.

Following the 1979 Iranian Revolution in which the Shah was overthrown, Iran became an Islamic Republic. An Islamic republic is the name given to several states that are officially ruled by Islamic laws (Sharia Law), including the Islamic Republics of Afghanistan, Iran, Pakistan, and Mauritania. (from wikipedia)

The following is from an Oct. 2016 article by Dr. Majid Rafizadeh, an Iranian-American political scientist published at Front Page Mag: The following are some of the rules for women which are derived from Iran’s Islamic constitution and moral police codes:

On March 5, 2021, Masih Alinejad, @AlinejadMasih, tweeted:
Women of #WhiteWednesdays in Iran are still in prison. By removing their compulsory hijab, they had produced this awe-inspiring video on women’s day on Tehran’s metro. They were calling their sisters to band together, regardless of whether they wear hijab or not: