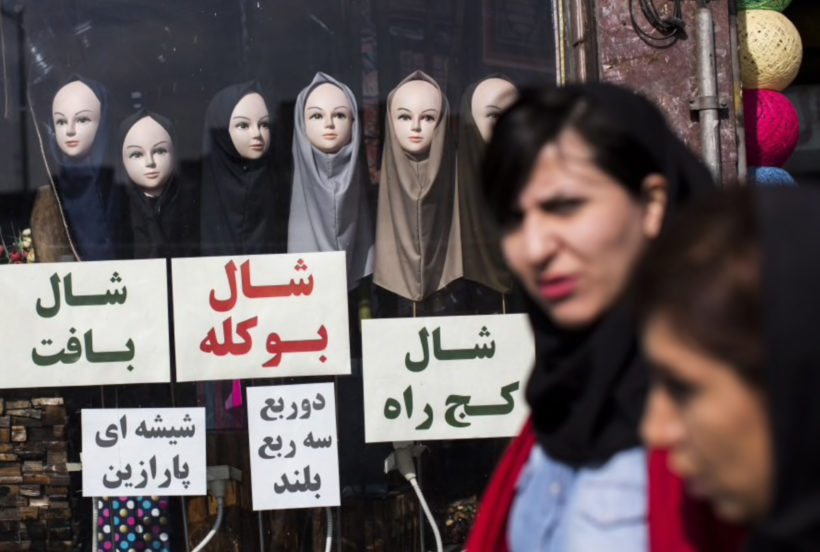 In this file photo taken on Feb 24, 2016 Iranian women walk past a shop displaying hijabs (headscarves) on mannequins in the downtown district of the capital Tehran. Tehran police have arrested 29 women for appearing in public without a headscarf as protests against the dress code in force since the Islamic revolution of 1979 intensify, Iranian media reported on Feb 2. (AFP / Behrouz Mehri)

(from Germany’s Deutsche Welle news, Feb. 2) – Police in Iran have arrested 29 women who were waving their headscarves to protest the Islamic government’s law which forces women to wear them at all times in public. The protest has gained steam online as demonstrations continue in Iran.

Iranian police said on Thursday that 29 women had been arrested for protesting the country’s compulsory hijab rules, the private Tasnim news agency reported. Tasnim has strong links to the Iranian Revolutionary Guards and aims to defend “the Islamic Republic against negative media propaganda.”

Iran’s Islamic law, imposed after the 1979 Islamic revolution, requires women to cover their hair and wear long, loose-fitting clothes in public. Six other women were also reportedly taken into custody this week.

A growing number of women in Iran have been removing their hijabs and waving them on a stick to protest the Iranian law.

Several images and videos of the demonstrations have gone viral on social media. The protests have coincided with huge demonstrations against economic conditions in eastern Iran. Some have called for the country’s supreme leader, Ayatollah Ali Khamenei, to step down. …

The hijab-waving demonstration is part of a campaign started by exiled Iranian journalist Misah Alinejad, who one year ago encouraged women to post images and videos of themselves on social media with the hashtag #whitewednesdays. The trend picked up momentum after videos in images were posted online in late December of a woman who was arrested for waving her hijab on a street corner in Tehran.

“We are fighting against the most visible symbol of oppression,” said Alinejad, who also hosts the website My Stealthy Freedom. “These women are saying ‘It is enough — it is the 21st century and we want to be our true selves.'”

Police in Iran seemed to take an indirect shot at Alinejad’s campaign on Thursday, saying the 29 arrested women were “tricked” into removing their hijabs by a propaganda campaign spread by Iranians living abroad, the news agency Tasnim [aligned with the Iranian Revolutionary Guard] reported.

This article originally appeared on DW .com. Its content was created separately to USA TODAY.

(Read more in a commentary about the courageous women of Iran)

2. For IRAN:
a) list the who, what, where and when of the news item
b) How does the Islamic Republic’s law require women to dress?
c) Read the “Background” and watch the videos below. What 2 or 3 adjectives would you use to describe the women in Iran who are risking fines and prison to stand up for their right to choose? Explain your answer.

Under the Pahlavi Dynasty:  The Pahlavi Shahs were the rulers of Iran between 1925 and 1979 and they introduced many reforms concerning women’s rights.

Following the 1979 Iranian Revolution in which the Shah was overthrown, Iran became an Islamic Republic. An Islamic republic is the name given to several states that are officially ruled by Islamic laws (Sharia Law), including the Islamic Republics of Afghanistan, Iran, Pakistan, and Mauritania. (from wikipedia)

The following is from an Oct. 2016 article by Dr. Majid Rafizadeh, an Iranian-American political scientist published at Front Page Mag: The following are some of the rules for women which are derived from Iran’s Islamic constitution and moral police codes:

Women protest hijab laws in Iran – from The National January 30, 2018