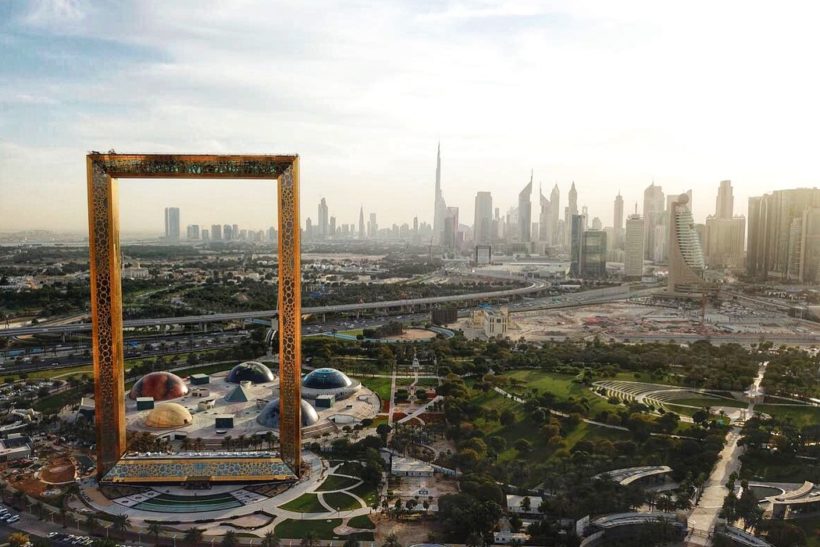 (by Eoghan Macguire and Alma Al Turkmani, CNN, Jan. 15) – The Dubai Frame, a 150-meter-tall and 93-meter-wide hollow, gold-plated observation tower, officially opened in the city’s Zabeel Park earlier this month. Believed to be the world’s largest picture frame, its glass-bottomed “sky deck” provides a 360-degree view of both old and new Dubai.

When looking south from the tower, Dubai’s battery of hyper-modern skyscrapers dominate, including the world’s tallest building, the Burj Khalifa. From the opposite side, some of the city’s most historic neighborhoods come into view.

Visitors at the attraction this week seemed impressed. “I think it (is) beautiful design wise and concept wise — even its grand size,” said Salwa Sharrah from Kuwait. Nagwan Rabi from Spain added: “It’s beautiful to see the contrast … with the old Dubai and the new Dubai.”

Dubai hopes the frame will become a major attraction. A museum on its lower floor recounts Dubai’s journey from a sleepy fishing village to global destination, while an immersive video experience predicts what the emirate will look like in 2050.

Mexican-born architect Fernando Donis claims the idea for the $68 million frame was stolen from him.

In 2008, Donis won an international competition, hosted by Dubai Municipality and ThyssenKrupp Elevator, to design what a detailed brief described as a new “tall, emblematic structure for Dubai.”

Held under the auspices of the International Union of Architects (UIA), a UNESCO affiliated organization, the competition attracted over 900 entrants. Conditions outlined in the competition’s official rules stated the winner’s design would be considered by the Dubai Municipality and, if commissioned, only be used once a contract had been signed by both parties.

The winner would retain copyright and their design could not be used — even in part — without their formal consent.

However, Donis told CNN last year that the Dubai Municipality made some minor changes to his design entry and went ahead with the project, without signing a contract with him. In an intellectual property lawsuit filed in the US in 2016, Donis claimed he had not been included in the frame’s construction process or been compensated for it.

Edward Klaris, one of the New York-based lawyers who filed the suit, explained that the complaint was brought in the US because “the Dubai Municipality does not allow itself to be sued in Dubai.” That case was voluntarily withdrawn last month due to what Klaris described as procedural and jurisdictional issues.

But he added that the matter was far from over.

Donis told CNN via email that he was “very happy” to see the frame built, but remained “disappointed that his rights were not respected.”

The Dubai Frame website currently credits Donis with the design, but CNN requests for comment from the municipality on the architect’s claims went unanswered. A spokesperson for Thyssenkrupp told CNN that it was not able to comment on the matter as it represented an alleged commercial disagreement between the Dubai Municipality and Donis. UNESCO said it was not involved cwith the Dubai Frame.

The UIA (the International Union of Architects, the organization that sponsored the contest Donis won) said in an emailed statement that it had been under new direction since 2015 and did not have first-hand information about the Dubai Frame. It added that the 2008 event was correctly conducted, in line with principles embodied in UNESCO regulations, and that it could not legally intervene in the aftermath of a competition.

For Donis the legal battle will continue and remains a matter of principle. But he also hopes to gain further recognition for his work on the frame, as well as financial compensation.

Klaris told CNN the plan is to monitor how the Dubai Municipality proceeds with merchandising and the international advertising of the frame, to see if any further opportunities for litigation arise.

Donis added: “(The case) definitely needs to be discussed to prevent this from happening again.”

1. For UNITED ARAB EMIRATES (UAE) – Dubai is one of the United Arab Emirates (see “Background” below for more info), give the following information:

2. For DUBAI:
a) list the who, what, where and when of the news item
b) What is the government’s plan for the Dubai Frame?
c) Describe the controversy over the design.
d) From the article: “The Dubai Frame website currently credits Mr. Donis with the design, but CNN requests for comment from the municipality on the architect’s claims went unanswered.” What is your reaction to this?
e) How would you characterize Dubai’s billionaire rulers’ decision to credit but not compensate Mr. Donis?

The United Arab Emirates (UAE) was established in 1971. It is a federation of seven constituent monarchies:

Islam is the official religion of the UAE and Arabic is the official language (although English and Indian dialects are widely spoken, with English being the language of business and education particularly in Abu Dhabi and Dubai).

The UAE is criticized for its human rights record, including the specific interpretations of Sharia used in its legal system.  (from wikipedia)

Discovery of oil in Dubai: (from wikipedia)

The major turning point in the history and fortunes of Dubai was the discovery of oil in 1966. Coupled with the joining of the newly independent country of Qatar and Dubai to create a new currency, the Riyal, after the devaluation of the Persian Gulf rupee which had been issued by the Government of India, it enabled Dubai to rapidly expand and grow. Once the first shipment of oil was made in 1969, the future of Dubai as an autonomous state was secured, and its ability to dictate policy in later years to the UAE was cemented.

Formation of the UAE: