(The excerpts below are from WashingtonTimes.com – from wire dispatches and Washington Times staff reports) 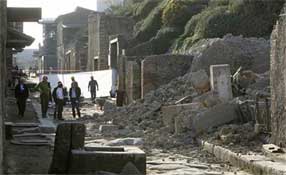 ROME | Italy’s culture minister says more buildings inside the ancient Roman city of Pompeii could collapse, a warning that comes a day after a 2,000-year-old house once used by gladiators disintegrated into rubble.

The collapse Saturday at one of Italy’s main tourist attractions was a source of embarrassment for the government and the country. Culture Minister Sandro Bondi went to Pompeii on Sunday to survey the damage. 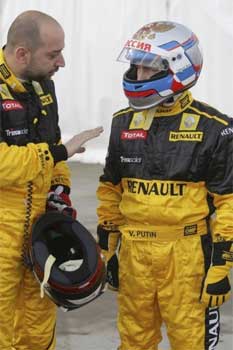 RUSSIA – Putin roars off in Formula One car

Mr. Putin (on right in photo, wearing helmet) signed a deal last month with Formula One chief Bernie Ecclestone to bring F1 racing to Russia starting in 2014, and his televised test drive could help raise the profile of the sport in Russia.

It also fits with the action-man image he has cultivated over the years, beginning with his startling flight into Chechnya in 2000 in a fighter jet.

After receiving instructions, Mr. Putin climbed into the bright yellow race car wearing a matching jumpsuit and then drove off by himself along an empty road near St. Petersburg. He spun out at one point, but regained control.

When he finished the drive and was told his maximum speed, he smiled and said in English: “For the first time, it’s good.”

BAGHDAD -The walls were still splattered with blood and pieces of flesh as Iraqi Christians celebrated Mass on Sunday in the church that just a week before had been the scene of a horrific bloodbath in which dozens died.

Parishioners holding candles and wearing black gathered in Baghdad’s Our Lady of Salvation Church, which had been stripped bare of pews and still bore bullet holes along its walls, while overhead the chandeliers and ceilings were stained with blood.

Islamic militants took about 120 parishioners hostage last Sunday in the worst attack against the country’s Christian minority since the 2003-U.S. led invasion unleashed a torrent of violence across the country. By the end of the siege, 58 people were dead.

At the Mass, the congregants read verses from the Bible and laid out candles in the shape of a cross on the church floor, along with the names of those who died. At the front of the church were photos of the two priests killed in the attack.

DANNENBERG – Activists rappelled down from a high bridge, broke through police lines and chained themselves to German train tracks Sunday, trying to halt a shipment of nuclear waste as they protested Chancellor Angela Merkel’s plans to keep using nuclear energy.

The train, which set off Friday from a reprocessing plant in France, slowly headed toward the northern town of Dannenberg, where containers carrying 123 tons of reprocessed nuclear waste were to be loaded onto trucks for the final leg of their journey to a disputed storage site at Gorleben.

Riot police tried to stop up to 4,000 protesters making their way through the woods onto the tracks near Dannenberg ahead of the nuclear-waste train. Police used water cannons and pepper spray and wrestled with activists to break up the protest, but some still reached the rail line.

HAVANA – The wives and mothers of Cuba’s most prominent political prisoners marched through the leafy streets of the capital Sunday, demanding the government honor an agreement to release their loved ones by the end of the day – or face protests and international condemnation.

With the deadline approaching and no word on the men’s fate, a standoff between President Raul Castro and the island’s small but vocal opposition community appeared imminent. One dissident vowed to start a hunger strike if the 13 prisoners are not in their homes by Monday, and a human rights leader warned the government was playing with fire.

The July 7 deal called for all the prisoners to be free in three to four months, a period that ended at midnight Sunday.

2. For Italy:
a) list the who, what, where and when of the news item
b) What do you know about Pompeii that is not mentioned in the news blurb or Background?

3. For Russia:
a) list the who, what, where and when of the news item
b) Prime Minister Putin’s office has released photos of Putin hunting, swimming, horseback riding and fishing. Media outlets say the photos are aimed at reinforcing Putin’s tough-guy image that Russians like, speculating that he may run again for President of Russia. Putin has already served two terms as president and was not eligible to run for a third consecutive term. He is eligible to run again after another serves as president. The Prime Minister is the figurehead of the government in Russia; the President runs the government; he holds the real power. Would photos of a presidential candidate in the U.S. in rugged outdoor activities cause you to vote for that candidate? Why or why not?

4. For Iraq:
a) list the who, what, where and when of the news item
b) What had happened to many of the members at the church a week ago?
c) Many Iraqi Christians have been threatened, attacked or murdered by Muslims since the U.S. invaded in 2003. What should the U.S. do to protect Iraqi Christians?

5. For Germany:
a) list the who, what, where and when of the news item
b) The protesters want to force the German government to stop using nuclear energy. What would be a better way for the protesters to permanently accomplish their goal?
c) What do you think of the method the protesters used?

6. For Cuba:
a) list the who, what, where and when of the news item
b) Why are the men in prison?
c) A political prisoner is a person who has been imprisoned for holding or advocating dissenting political views [for opposing the government in power; usually an authoritarian government or dictatorship]. Ask a parent why he/she thinks the Cuban government has broken its promise to Catholic Cardinal Jamie Ortega to release the political prisoners.

ON POMPEII:
Pompeii is a partially buried Roman town-city near modern Naples, Italy. Along with Herculaneum, its sister city, Pompeii was destroyed and completely buried during a long catastrophic eruption of the volcano Mount Vesuvius spanning two days in 79 AD. The eruption buried Pompeii under 4 to 6 meters of ash and pumice, and it was lost for over 1,500 years before its accidental rediscovery in 1599. Since then, its excavation has provided an extraordinarily detailed insight into the life of a city at the height of the Roman Empire. (from wikipedia)

ITALY:  For street views from the city of Pompeii, click on the Google Maps Street View link on the Pompeii homepage at pompeiisites.org.

RUSSIA:  For photos of PM Putin in various outdoor activities, go to guardian.co.uk/news/gallery/2007/aug/14/russia.internationalnews#/?picture=330565632&index=0.