Paris | France’s governing party plans to launch a national debate on the role of Islam and respect for French secularism among Muslims here, two issues emerging as major themes for the presidential election due next year.

Jean-Francois Cope, secretary-general of President Nicolas Sarkozy’s Union for a Popular Movement, said Thursday the debate will examine issues such as the finance and construction of mosques, the contents of Friday sermons and the education of the imams delivering the prayers.

The announcement follows the president’s declaration last week that multiculturalism had failed in France.

Vienna | Austria is granting asylum to 30 Iraqi Christians fleeing persecution in their homeland.

The Foreign Ministry expected the group to arrive in Vienna on Thursday and said the Christians would receive refugee status.

Iraqi Christians have suffered violent attacks from Muslim militants. Extremists killed at least 68 Christians in October, when attackers stormed a Baghdad church during Mass and took the congregation hostage. 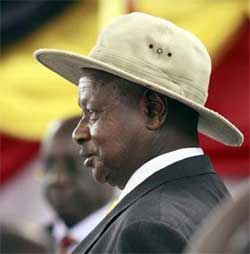 Entebbe | Ugandan President Yoweri Museveni (see photo on right) said Wednesday he will jail anyone who tries to spark Egypt-style unrest in the country ahead of national elections Friday that are widely expected to see Museveni extend his 25-year grip on power.

“There will be no Egyptian-like revolution here,” Museveni told a news conference. “There is nobody who can use extraconstitional means to take power here. That is out of the question.”

Museveni, who seized power in 1986 as the head of a guerrilla army, faces top opposition challenger Kizza Besigye and six other opponents in the run to win a five-year term.

GERMANY – Germany may decide that noisy kids aren’t so bad

Berlin | Children of Germany take heart – it may soon be perfectly legal to make noise.

Germany is so desperate to encourage people to have more children that the government is proposing a bill allowing citizens under 6 to laugh, shout and play at any volume.

The government’s move comes after a series of lawsuits about children and noise, and a recent call from a senior citizens’ [group], who sought to ban kindergartens from residential areas because they are too loud.

The government said Wednesday the proposed law would exempt children from strict regulations on noise limits, which force construction sites to stand idle for hours at midday and prohibit mowing lawns on Sunday.

Mexico City | Gunmen who shot up an SUV carrying two U.S. Immigration and Customs Enforcement agents, killing one, knew they were attacking law enforcement officers, according to U.S. officials.

But details of the attack that emerged Wednesday indicate the two agents were not targeted ahead of time, rather stopped in the wrong place at the wrong time in a blue Suburban — a vehicle coveted by drug cartels.

Special Agent Jaime Zapata, 32, died and a second agent, Victor Avila, was wounded Tuesday when they were attacked after being stopped on a four-lane federal highway in northern Mexico.

They were returning to Mexico City from a meeting with other U.S. personnel in the state of San Luis Potosi, according to an ICE statement, which also said the Mexican government does not authorize U.S. law enforcement personnel to carry weapons.

(The news briefs above are from wire reports and staff reports posted at:  washingtontimes.com, tulsaworld.com and post-gazette.com on Feb. 17th.)

1. For each of the 5 countries, give the following information:  (Include special notations for all information on the Ivory Coast)
a) the continent on which it is located
b) the name of the capital city
c) the type of government
d) the chief of state (and head of government if different) [If monarch, since what date has he/she ruled? – include name of heir apparent]e) the population

2. For France:
a) list the who, what, where and when of the news item
b) Secularism is defined as – the belief that religion should not be involved with the ordinary social and political activities of a country. Watch the video under “Resources” below the questions. Do you think it is a good idea for President Sarkozy and his party to conduct national debates on this topic? Explain your answer.

3. For Austria:
a) list the who, what, where and when of the news item
b) Are you surprised to hear about attacks against Iraqi Christians? Explain your answer.

4. For Uganda:
a) list the who, what, where and when of the news item
b) For how many years has President Museveni been in power?
c) By the time you read this, election results will have been announced. Who won the Ugandan presidential election?

5. For Germany:
a) list the who, what, where and when of the news item
b) What is the government’s motive for proposing the new law?

6. For Mexico:
a) list the who, what, where and when of the news item
b) A total of 34,612 people have died in drug-related violence in Mexico over the past four years, since President Felipe Calderon launched his offensive against drug gangs after taking office in December 2006. President Calderon acknowledged that 2010, which saw 15,273 deaths, had been “a year of extreme violence”. According to his report, half of the murders were in three northern states. The figures include the killings of gang members, police and troops, as well as innocent bystanders.
The Mexican government does not authorize U.S. law enforcement personnel to carry weapons in Mexico.
a) Should the U.S. send our law enforcement personnel into Mexico without weapons? Explain your answer.
b) How should President Obama respond to this latest attack/murder of U.S. law enforcement officers?

Since assuming power, Museveni and his government have largely put an end to the human rights abuses of earlier governments, initiated substantial economic liberalization and general press freedom, and instituted economic reforms in accord with the International Monetary Fund (IMF), World Bank, and donor governments. (from the U.S. State Department state.gov/r/pa/ei/bgn/2963.htm#political)

Obviously, when you pack 82 million people into a country the size of Montana – with 82 times more Germans than Montanans – you have to do something to control neighbor-noise. That seems logical. The preferred German method to do that is called “laws and regulations.” In Germany, there are federal, state, and local laws concerning noise and the control thereof.

Americans are shocked when they discover to what degree German law dictates when and where people can make even normal, everyday “loud” noise, such as lawn mowing. Usually, these are state (Bundesland) or community laws that regulate noise. A typical example would be regulations that forbid any Lärmbelästigung (noise pollution) at these times:

The hours may vary slightly from state to state, but you can see that your lawn-mowing options are very limited, and the kids and/or your stereo need to be muted after nine or ten in the evening. The laws and regulations use terms such as Ruhestörung (“disturbing the peace”) and Zimmerlautstärke (“room volume”). I’ve heard of “room temperature,” but never “room volume.” Apparently, the German term means that you can’t make any noise that is loud enough to escape your room and be detected by your neighbors. (from a blog about Germany written by an American: german-way.com/blog/2009/05/11/many-kinds-of-noise-vielerlei-laerm)

Read about German noise restrictions from the website for a U.S. Army Base in Germany at wiesbaden.army.mil/sites/commander/cp_quiet_policy.asp.

FRANCE:  Watch a video of Muslim men blocking a street in Paris to pray (women worship separately). This is a daily occurence in Paris.

Read a 2006 article about attempts to solve the AIDS crisis in Uganda at studentnewsdaily.com/news-issue/taking_pride_in_purity.

For background on Uganda, go to the U.S. State Department website at state.gov/r/pa/ei/bgn/2963.htm.