Mexico: recovery efforts are not over 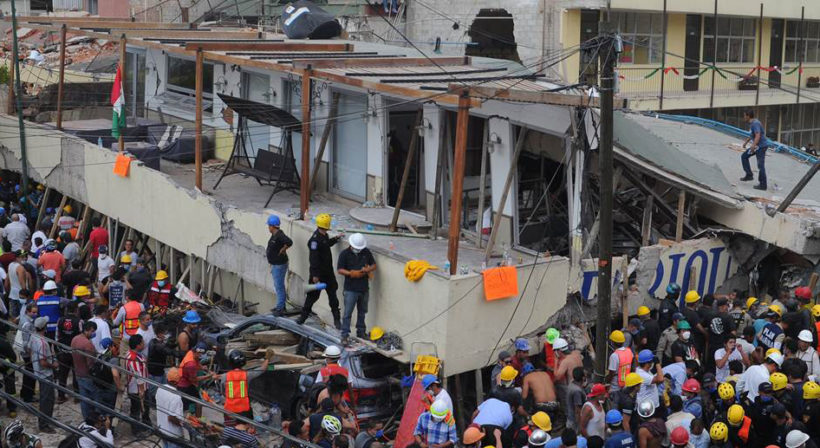 (by Associated Press 9/26/17) MEXICO CITY — As many as 360 buildings and homes are in danger of collapse or with major damage in Mexico City nearly a week after a magnitude 7.1 earthquake collapsed 38 structures. [The quake struck on Tuesday, September 19, on the 32nd anniversary of the 1985 Mexico City earthquake, which killed about 10,000 people and was commemorated with a national earthquake drill at 11 a.m. local time, two hours before this earthquake struck.]

The risk of delayed collapse is real: The cupola of Our Lady of Angels Church, damaged and cracked by the Sept. 19 quake, split in half and crashed to the ground Sunday evening. There were no injuries.

[Residents] continued calling police Monday as apparently new cracks appeared in their apartment buildings or existing ones worsened, even as the city struggled to get back to normality.

Education Secretary Aurelio Nuno said Monday that officials had cleared only 676 of Mexico City’s nearly 9,000 schools to reopen Tuesday and said it could be two to three weeks before all are declared safe, leaving hundreds of thousands of children idle.

Mexico City Mayor Miguel Angel Mancera said at least seven schools were among the buildings thought to be at risk of tumbling.

The frustrations of families with loved ones missing [was evident] Monday night at the largest remaining search site, a collapsed seven-story office building.

“What are they hiding from us,” asked Javier Saucedo, father of 27-year-old Angel Javier Saucedo, who worked in the building. He complained that authorities have been removing bodies from the site without letting families know.

“Why does our own government toy with the pain of the families,” he said. “What they are doing is not fair.” He called for President Enrique Pena Nieto and the mayor to come to the site and clear things up for them.

At several points in the city, employees gathered on sidewalks in front of their workplaces Monday refusing to enter because they feared their buildings could collapse.

“We are afraid for our own safety,” said Maribel Martinez Ramirez, an employee of a government development agency who, along with dozens of co-workers, refused to enter. “The building is leaning, there are cracks.”

Mayor Mancera said 360 “red level” buildings would either have to be demolished or receive major structural reinforcement. An additional 1,136 are reparable, and 8,030 buildings inspected so far were found to be habitable. Search teams were still digging through dangerous piles of rubble, hoping against the odds to find survivors. The city has accounted for 186 of the 326 dead nationwide.

The smell of rotting corpses increasingly hung over the largest remaining search site near the city’s center.

Juan Carlos Penas, in charge of a Spanish rescue team working at the remains of what had been a seven-story office building, said Monday that the work was very slow because the rubble was so unstable. Rescuers managed to make a small entry between the second and third floors and insert a camera, but they did not immediately find anyone.

While no one has been found alive since last Wednesday, relatives of the trapped, anxious to cling to any hope of rescue, won injunctions against actions that could cause the ruins to collapse further.

The federal judiciary council said Sunday that court injunctions for seven points around the city prevent authorities from using backhoes or bulldozers to remove rubble, in order to allow “search and rescue operations to continue … to preserve the life of people who may be among the remains of the structures.” …

One by one, other searches have closed down in recent days, after sniffer dogs were sent in and didn’t find life and thermal imaging devices turned up no body heat signatures. Heavy machinery moved in to begin removing the mountains of debris. Empty lots began to appear where just days ago a building stood.

At the site of a collapsed factory that held various businesses near the city center, the rubble had already been cleared, leaving behind the concrete foundation. People left flowers Monday in memory of those who perished there.

From Associated Press. Reprinted here for educational purposes only. May not be reproduced on other websites without permission from the AP.

1. List the following information for Mexico: (see the CIA World FactBook website for answers)
a) capital:
b) location/the countries that share its borders:
c) the religious breakdown of the population:
d) the type of government:
e) the chief of state (and head of government if different):
f) the population:

3. Why are employees at several buildings around the city refusing to go to work?

4. a) Why have relatives of those not yet rescued/recovered from several buildings around the city obtained court injunctions preventing authorities from using backhoes or bulldozers to remove rubble?
b) What concern does the father of 27-year-old Angel Javier Saucedo, who worked in a collapsed seven-story office building have?
c) Why is the work of the recovery teams going so slowly?

5. Why have searches at other buildings closed down in recent days?

Here is a list of countries that have sent support, though it is probably incomplete: