Posted on April 6, 2011 in Wednesday's Example of Media Bias

-Read the excerpt below from honestreporting.com's report "Stories the Media Missed" posted March 24, 2011.
-Read "Types of Media Bias" in the right column. Then answer the questions.

With the international media’s attention fixed on Libya and Japan, Israel has [been out of the media spotlight] up until [the March 23rd] bombing in Jerusalem.  …with less column inches available for other world news, editors have indulged in selective reporting or under reporting of important stories from Israel.  …Have [you] seen the following stories from the past two weeks?….

While the media reported an initial 124 missiles launched at Libyan targets, Israel’s south came under a barrage of some 50 mortar shells fired from Gaza, which injured two, on Saturday morning. The media has come to treat the firing of missiles from Gaza as “normal” and therefore not newsworthy. Nonetheless, this escalation barely registered with the foreign press…. until the Israeli reaction. 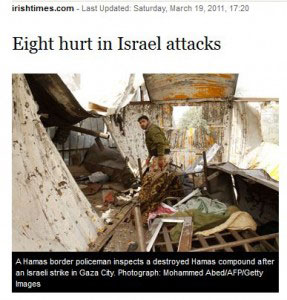 A good case study in bias is this Reuters report that appeared in the Irish Times:

If a media outlet constantly publishes stories about Gaza’s “suffering” under an Israeli blockade or the “brutality” of Israel’s boarding of the Mavi Marmara flotilla, then surely the readership also deserves to see exactly why Israel is enforcing a naval blockade of Gaza?

On March 15, the Israeli Navy seized an Iranian arms shipment bound for Gazan terror groups. Despite the evidence of some 50 tons of weapons presented to the media at Ashdod Port and a wealth of IDF-released video footage of the boarding and subsequent discovery of the hidden arms on board the Victoria, the incident [got] very little coverage.

In addition, the behavior of Iran and Syria, offering material support to terrorist groups deserves to be exposed as widely as possible. The Turkish seizure of weapons on board an Iranian aircraft also failed to register with the media.

When it comes to the Middle East and Israel, very often it is not necessarily what is written that skews the reality but what is missed out.

1.  What types of bias are the excerpts examples of?

2.  Do you think the media gives a balanced picture of the conflict between Israel and the Palestinian terror group Hamas? Explain your answer.
(If you don’t know enough about it to answer this question, ask a parent what he/she thinks.)

1.  The excerpts are examples of bias by spin, omission and story selection.