2. What idiom is the cartoonist using to describe Vice President Biden? 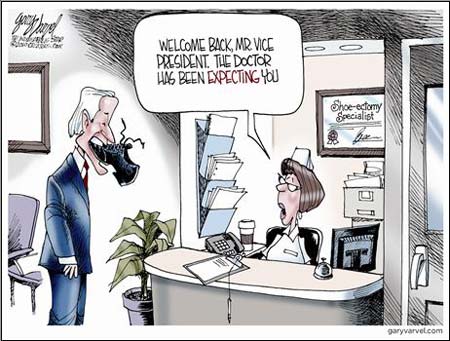 1. This cartoon referrs to the signing ceremony for the health care bill at the White House this week.  Vice-President Joe Biden introduced the President and said “Mr. President, you’re the guy that made it happen.”
He then embraced Mr. Obama and excitedly whispered in his ear: “This is a big &*#?!! deal!” The aside may have been meant for Obama’s ears alone but it was picked up by the microphone on the podium and broadcast to the watching television audience of millions.

2. The cartoonist depicts the idiom “put his foot in his mouth.”  Foot in mouth (or foot in mouth disease) refers to the tendency to say the wrong thing at the wrong time. Vice-president Biden is known for doing this. Some of his more well-known gaffes include:

–“I mean, you got the first mainstream African-American who is articulate and bright and clean and a nice-looking guy. I mean, that’s a storybook, man.” -Joe Biden, referring to Barack Obama at the beginning of the 2008 Democratic primary campaign, Jan. 31, 2007

—“His mom lived in Long Island for ten years or so. God rest her soul. And- although, she’s- wait- your mom’s still- your mom’s still alive. Your dad passed. God bless her soul.” –Joe Biden, on the mother of Irish Prime Minister Brian Cowen, who is very much alive, Washington, D.C., March 17, 2010

–“When the stock market crashed, Franklin D. Roosevelt got on the television and didn’t just talk about the, you know, the princes of greed. He said, ‘Look, here’s what happened.” -Joe Biden, apparently unaware that FDR wasn’t president when the stock market crashed in 1929 and that only experimental TV sets were in use at that time, interview with Katie Couric, Sept. 22, 2008

Watch a video of Biden gaffes below: