Free speech for those who agree with me?

2. Which comic device does the cartoonist use to make his point? Explain your answer.
a) pun
b) parody
c) personification
d) irony
e) caricature 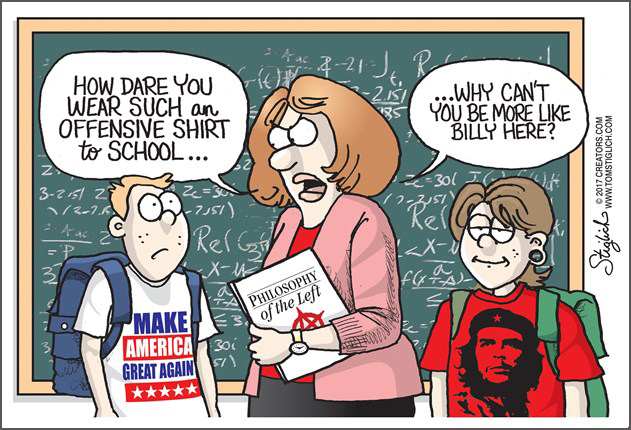 1. A Georgia high school teacher on August 31st compared t-shirts with #MAGA (Make America Great Again) – President Trump’s slogan – to a “swastika” and told students to turn them inside out or leave class. “You cannot wear a Swastika to school – you cannot use a slogan like that,” the teacher told the students. The whole exchange was captured on the cellphone of another student. When the student recording it asks “Wait, they can’t wear a Trump t-shirt?” the teacher responded “Because it says ‘Make America Great Again’ …I’m not saying about Trump, but the slogan.”
[NOTE THE SCHOOL DISTRICT’S RESPONSE: The school’s principal immediately met with and apologized to these students and their families, according to a spokeswoman for the superintendent. The spokeswoman said, “Her actions were wrong, as the ‘Make America Great Again’ shirts worn by the students are not a violation of our School District dress code. Superintendent of Schools Dr. Brian V. Hightower is deeply sorry that this incident happened in one of our schools. It does not reflect his expectation that all students be treated equally and respectfully by our employees.”]

2. d) irony – when the opposite of what you expect to happen occurs; You would expect a teacher in an American public high school to support a student’s right to free speech – not deny it. Instead, the teacher commends the student supporting Che Guevera, a communist guerilla who murdered innocent men and boys in Cuba.

a) pun, which is a “play on words” – a type of humor using a word or phrase that has two meanings

c) personification, which is a figure of speech in which human characteristics are attributed to an abstract quality, animal, or inanimate object.