To what news item does this cartoon refer?
a) the Tennessee State Legislature’s recent ruling to fund historical markers throughout the state
b) the upcoming debate over Tennessee’s belonging to the Union or the Confederacy during the Civil War
c) the recent UAW defeat at Volkswagen’s Chattanooga plant
d) the massive brawl that took place last week between supporters of the UAW and VW employees who didn’t want to unionize
e) the victory of the UAW in the first foreign-owned auto plant in a Southern U.S. state 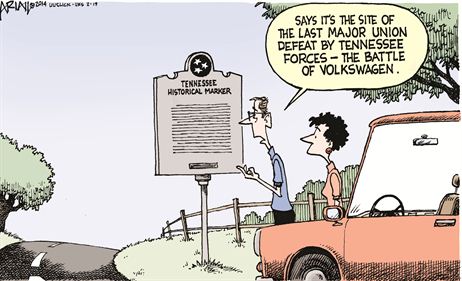