Before answering the questions, read about teleprompters below question #3.

1.  Why is the cartoonist poking fun at President Obama for being overly reliant on teleprompters?

2.  Without asking whether they voted for President Obama, try to get opinions from parents/teachers, etc. on whether they think this cartoon is funny and why.  (Those who support the president will probably not laugh and those who don’t support him will probably think it is funny.)

3.  How do you think the media would react if President Bush had used teleprompters to the extent that President Obama does?

(From teleprompting.com/FAQs.htm): A teleprompter is used to display smooth scrolling text (similar to credits at the end of a movie). … As the text is read, a teleprompter operator uses a computer to control the speed of the scrolling text to closely follow the speech pattern and delivery of the speaker.

Next time [President Obams is speaking, look for] the two panes of glass that are positioned at the corners of [his] podium. The glass reflect monitors that have the entire speech scrolling on them. While the text is seen clearly from behind the podium, it is completely invisible to the audience in front. …

Teleprompting is used to enhance performances in front of a camera or live audience. Benefits include: 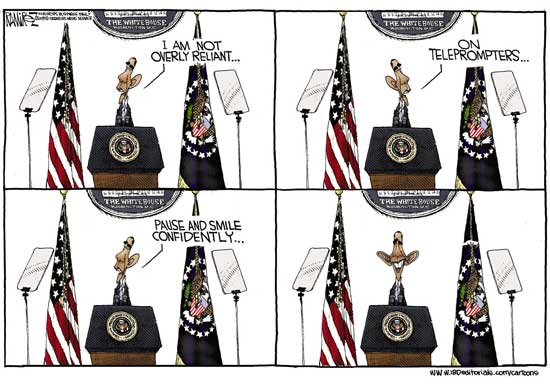 1.  The cartoonist is poking fun at the President for being overly reliant on teleprompters because he uses them in every speech, and even when he answers questions. The media presents Barack Obama as an extremely well-spoken person with a gift for speech. The cartoonist is suggesting that he is not the great speaker the media has portrayed him to be.

Many of the president’s admirers also feel that he is a superior orator. Reviews of the book being sold on Amazon “Say It Like Obama: The Power of Speaking with Purpose and Vision” included the following comments:

–Watch videos of “Obama lost without a teleprompter” at youtube.com/watch?v=omHUsRTYFAU.

–Read an editorial “Obama’s reliance on teleprompters“ at washingtontimes.com/news/2009/mar/10/obamas-reliance-on-teleprompters/.

–A recent article from politico.com/news/stories/0309/19663.html says the following about President Obama’s reliance on teleprompters:

Obama has relied on a teleprompter through even the shortest announcements and when repeating the same lines on his economic stimulus plan that he’s been saying for months – whereas past presidents have mostly worked off of notes on the podium except during major speeches, such as the State of the Union.

Obama has never tried to hide his use of a teleprompter. It was a mainstay during the final months of his campaign. He brought it to county fairs and campaign rallies alike – and once had it set up in the ring at a rodeo.

In a break from his routine, Obama did not use a teleprompter during his pre-Inauguration speech at a factory in Bedford Heights, Ohio – and his delivery seemed to suffer. He paused too long at parts. He accentuated the wrong words. And overall he sounded hesitant and halting as he spoke from the prepared remarks on the podium.

His use of the teleprompter makes work tricky for the television crews and photographers trying to capture an image of the president announcing a new Cabinet secretary or housing plan without a pane of glass blocking his face.

One White House photographer said “So if there’s someone else important in the frame, it’s hard to get a shot without the teleprompter.”

–It has even been said that the administration is looking to install a small video or computer screen into the podium used by the president for press conferences and events in the White House so that the communications people can pass along information to President Obama without being obvious about it. The screen would indicate whom to call on, seat placement for journalists, pass along notes or points to hit, etc.