1. Editorial cartoonists often use humor to make light of serious situations. What comic device does the cartoonist use to highlight the Islamic State’s use of the internet to recruit more terrorists?
a) caricature
b) satire
c) understatement
d) hyperbole 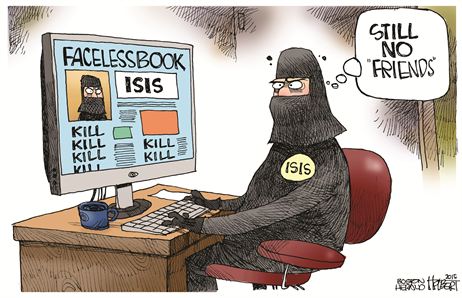 1. b) satire – satire is defined as: the use of irony, sarcasm, ridicule, or the like, in exposing, denouncing, or deriding vice, folly, etc.
ISIS actually recruits many jihadists using social media.