What is the meaning of the “red line” the cartoonist refers to? Ask a parent to explain the meaning. 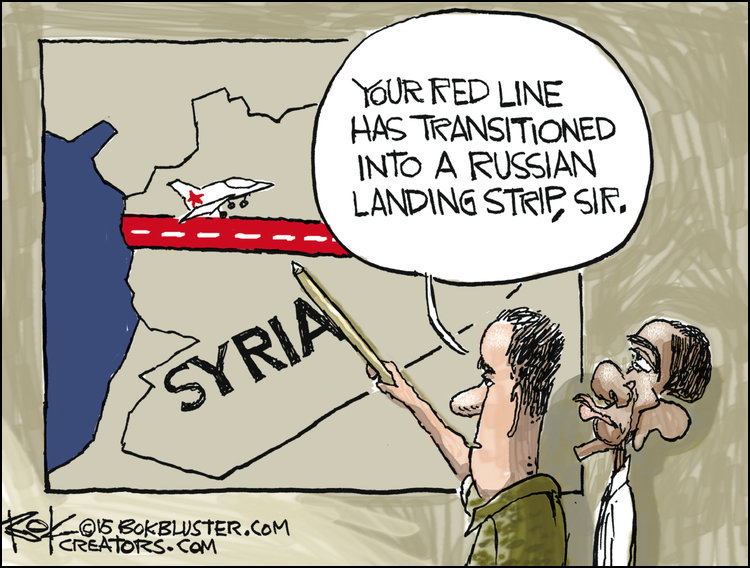 On August 20, 2012, President Obama stated that the use of chemical weapons by Syria’s President Asad would be a “red line for us.” He was specifically answering a question whether he would ever “envision using U.S. military” force in Syria.

Obama’s “red line” wasn’t an offhand remark. The president repeated the line several times and his staff used in official communications with the U.S. Congress:

Because of our concern about the deteriorating situation in Syria, the president has made it clear that the use of chemical weapons — or transfer of chemical weapons to terrorist groups — is a red line for the United States of America. The Obama administration has communicated that message publicly and privately to governments around the world, including the Assad regime.

Obama’s “red line” made headlines around the globe. Every one believed that if Syria’ s dictator Bashir al-Assad used chemical weapons, Obama would order military strikes. [After the President’s remarks, Assad] started with a small, deniable use of chemical weapons. The president’s [aides] quickly said the evidence was inconclusive, speculative and even dangerous. So progressively larger chemical weapons attacks followed—until U.N. inspectors and other international observers found the evidence to be so overwhelming that it couldn’t be denied any longer.

The President….denied drawing any red line and claimed it was the responsibility of Congress or the international community to do something. His hands were tied, he said, he couldn’t act alone. (from forbes.com)