1.  To what news item does this cartoon refer?

2.  Explain the controversy behind this event. 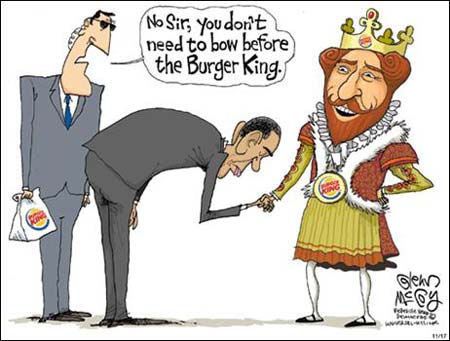 1. When meeting Emperor Akihito of Japan this week, President Obama bowed as he shook his hand.

2. Heads of state and their wives do not bow and curtsy to one another.  According to Miss Manners, “One does not bow or curtsy to a foreign monarch because the gesture symbolized recognition of his power over his subjects.” President Obama’s bow to the Emperor was not an appropriate greeting. Responding to criticism of the President’s bow, The State Department responded “The president was simply showing respect.”

Watch a video of President Obama’s bow to the Japanese emperor below: