What is the point of the two cartoons below? 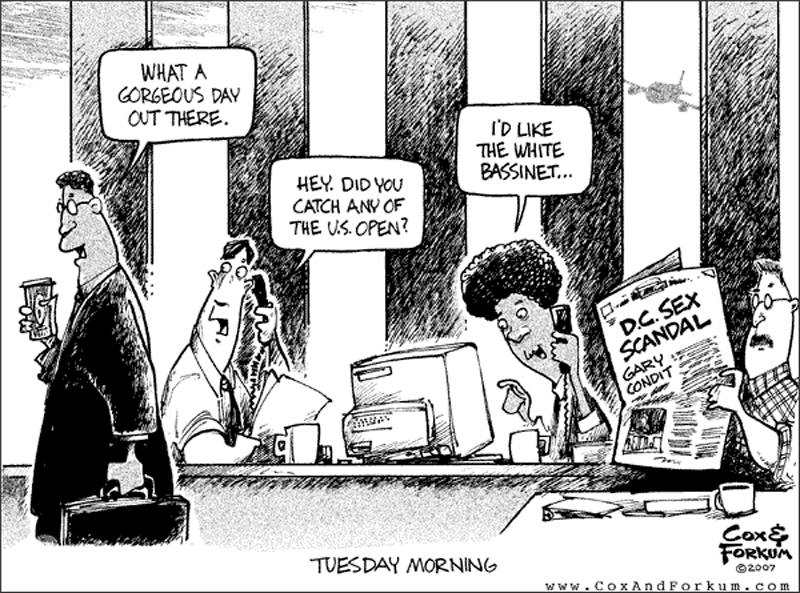 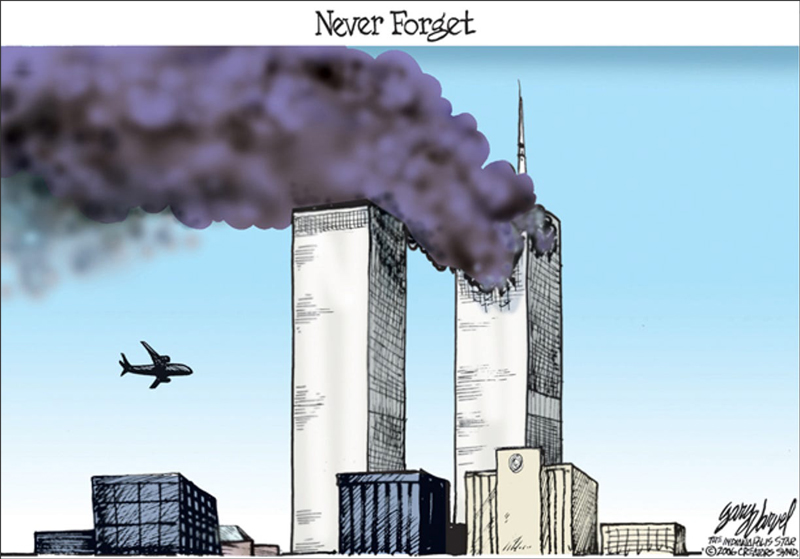 On Tuesday, September 11th, 2001, people working at the World Trade Center were, as most people do, making small talk as they began their day.  They could have been any of our parents, relatives, friends or neighbors.  Or any of us.  The people murdered by Islamic terrorists were innocent civilians, average citizens, going about their daily routines.

“In the excellent book Never Forget: An Oral History of September 11, 2001, authors Mitchell Fink and Lois Mathias collected stories from eyewitnesses. Here’s an excerpt from what David Kravette, a Cantor Fitzgerald broker, told the authors about his experience at the World Trade Center:

On the morning of September 11, I was on floor 105, tower 1. I had an 8 a.m. meeting set up with a client. He was bringing by some tech people to do some due diligence on our technology company called E-Speed. I get to work usually around seven, seven-fifteen. At eight, the client called to tell me they were running late. And I said fine. But I reminded him to bring photo ID downstairs. Ever since the last terrorist attack in ’93, the building requires photo ID downstairs. He’s been there before, so he knew the drill. He said, “Fine. No problem.”At 8:40, I get a phone call from the security desk downstairs, asking me if I’m expecting visitors. I said yes. “Well, they’re here,” they said. “But one of them forgot their ID.”

I’m 105 flights up. The commute to get downstairs takes about five minutes, especially around that time. So I’m annoyed, obviously, because I have to go down now to sign these people in after I just told them to bring ID. I look at this desk assistant across from me, thinking maybe she’ll help out and go down, but she’s on the phone. She’s also about eight months pregnant. She’s a few weeks from maternity leave and she’s on the phone talking to a friend and she’s on a website looking at bassinets and cribs. A very nice girl expecting her first child. So how lazy am I? I decide to go myself. …

… I take these two elevator rides down. I take the elevator from 105 to 78, change, and take the express down to the ground. I got down to the lobby. Our elevator banks actually face the visitors’ gallery. And I started walking over to the visitors’ gallery, I’d say it’s about thirty yards, and they’re standing there waiting for me. And I remember yelling, “Which one of you knuckleheads forgot your ID?”

And as I say this, you hear this really loud screeching sound. I turn around and it’s kind of coming from the elevators. So I run away from it, like ten steps, and look back. And the elevators are free-falling. Then, from the middle elevator bank, not the one I came down on, but from the middle one, a huge fireball explodes in the lobby. This huge fireball is coming right toward me. People got incinerated. And I remember just looking at this thing, not feeling scared, but just sad because I knew I was going to die. But as quickly as it came toward me, it actually sucked back in on itself, and it was gone. It left a lot of smoke and everything was blown out, all the glass and revolving doors leading into the shopping area. All I felt was a big wave of heat come over me, like when you put your face too close to a fireplace. My customer and my general counsel and I just ran out. The three of us ran over the overpass to where the Financial Center is. We went down to where the marina is, where the yachts are. And that’s when we found out what happened, that a plane had hit the building.

I looked up and saw this big gaping hole. I said, “What’s that falling out of the window?”

My general counsel looks at me like I’m nuts. And he says, “That’s people jumping out.” …

Cantor Fitzgerald had four floors in the North Tower — 101, 103, 104, and 105. Nobody got out on those floors. Everyone who was upstairs perished. There were a lot of phone calls to wives and husbands at around nine o’clock saying good-bye, as though they knew they were going to die.

Look for our post “Americans were united on 9/11” with videos, audio, a timeline, etc. posted on the homepage.