The cartoonist is lampooning NYC Mayor Mike Bloomberg’s recent proposal to ban the sale of sugary drinks larger than 16 oz. in restaurants, movie theaters, sports arenas, and street vending carts.  (If the NYC sugary drink ban is approved, consumers would still be able to buy the banned beverages in convenience and grocery stores.) 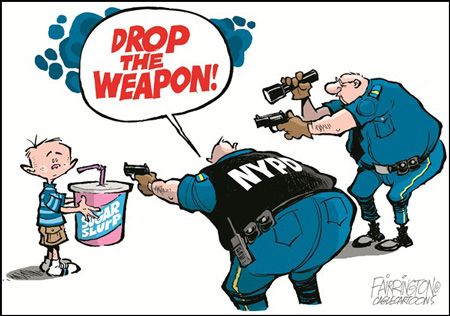 1.  Nanny state:  A government perceived as having excessive interest in or control over the welfare of its citizens, especially in the enforcement of extensive public health and safety regulations.  (from thefreedictionary.com)