1. A cartoonist often uses humor to illustrate a news item. What comic device does the cartoonist use to highlight this news story?

2. To what news item does this cartoon refer? 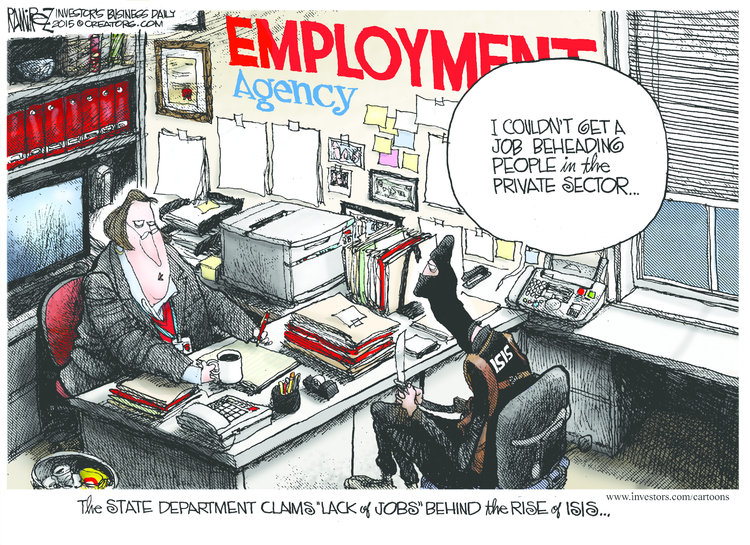 1. b) satire – satire is defined as: the use of irony, sarcasm, ridicule, or the like, in exposing, denouncing, or deriding vice, folly, etc.

2. This cartoon refers to the Obama administration’s assertion that Muslims who become ISIS terrorists do so in part because of a lack of job opportunities in their countries.

(On Feb. 16, in an interview on the conflict with the Islamic State, State Department deputy spokesman Marie Harf told MSNBC’s Chris Matthews: “we cannot win this war by killing them. We cannot kill our way out of this war. We need in the medium to longer term to go after the root causes that leads people to join these groups. Whether it’s a lack of opportunity for jobs, whether…”

In an interview with CNN’s Wolf Blizer the following day Mr. Blitzer asked: Just to be precise I want to give you a chance to respond to some of the critics who have been out there. You say it’s important to find these guys jobs so they don’t become terrorists. Explain what you meant.

Marie Harf replied: Where there are places around the world where there’s a lack of governance, a lack of economic opportunity. President George W. Bush talked about poverty being one of the drivers leading people to extremism. Where they are lacking in these kinds of opportunities, we need to talk about how to make that different, how to help our partners around the world give young men in that vulnerable age group a different path in life. Show them that there’s a different chance for them than joining a terrorist organization.)