What is the point of Lisa Benson’s cartoon? 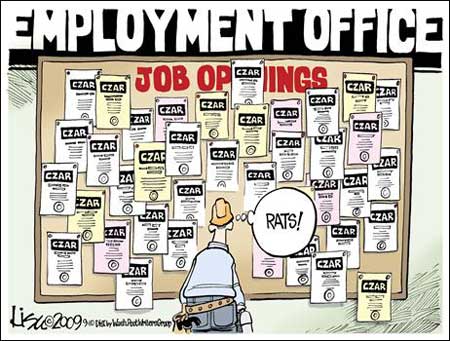 The unemployment rate is currently over 9%. President Obama has appointed many “czars,” so the cartoonist is joking that the only jobs available are czars (advisors) in the Obama administration.

NOTE:  The purpose of the Cabinet is to advise the President on matters relating to the duties of their respective offices. As the President’s closest and most trusted advisors, members of the Cabinet usually attend weekly meetings with the President. (Per wikipedia.org, President Obama did not meet with his assembled Cabinet until three months into his administration.)  The 15 Secretaries (Cabinet members) from the executive departments are appointed by the President, and they must be confirmed by a majority vote (51 votes) of the Senate. White House staff positions like chief of staff and press secretary do not require Senate confirmation.
The president’s “czars” (advisors) have become a point of controversy among his opponents because these appointees are not required to go through the same Senate confirmation as cabinet-level officials.

Read about President Obama’s czars at politico.com/news/stories/0909/26779.html.
Read about the president’s Cabinet at bensguide.gpo.gov/9-12/government/national/cabinet.html.