Posted on May 9, 2008 in Friday's Editorial Cartoon

Which two news issues is Steve Breen referring to in this cartoon? 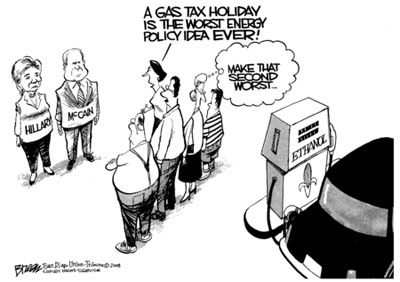 Reprinted here with permission from CopleyNews.com.

1) Presidential candidates Hillary Clinton and John McCain both want to suspend the 18.4-cents-per-gallon federal gas tax during the peak summer driving months to ease the pain of soaring gas prices. The tax is used to fund the Highway Trust Fund that builds and maintains roads and bridges.
Sen. Clinton proposes that it be paid for by “imposing a windfall profits tax on the big oil companies.”
Sen. McCain omits any mention of how to pay for the shortfall on his website, but when questioned about it an advisor to McCain said it “would be offset by general [Federal] budget revenues.”

2) Congress has imposed a new ethanol mandate through the Energy Policy Act of 2005. Since taking effect in 2006, this measure has increased energy and food prices while doing little to reduce oil imports or improve the environment.