1. Editorial cartoonists often uses humor to illustrate a news item – in this case President Trump’s executive actions/orders in his first week in office. Read the three cartoons. Which comic device do the first two cartoonists (Varvel and Ariail) both use? Explain your answer.
a) caricature
b) symbol
c) understatement
d) hyperbole
e) parody

2. Tone is the attitude a cartoonist takes towards a subject. Which pair of words best describes the tone of the third cartoon?
a) indifferent/apathetic
b) disgusted/cynical
c) sarcastic/humorous
d) angry/critical
e) grateful/appreciative

3. What is the point of Ramirez’s cartoon?

4. Do you agree with the Ramirez’s assertion? Explain your answer. 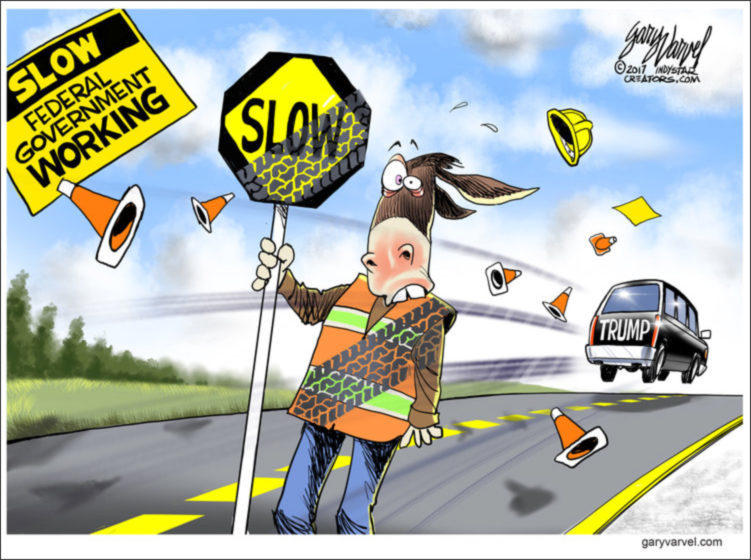 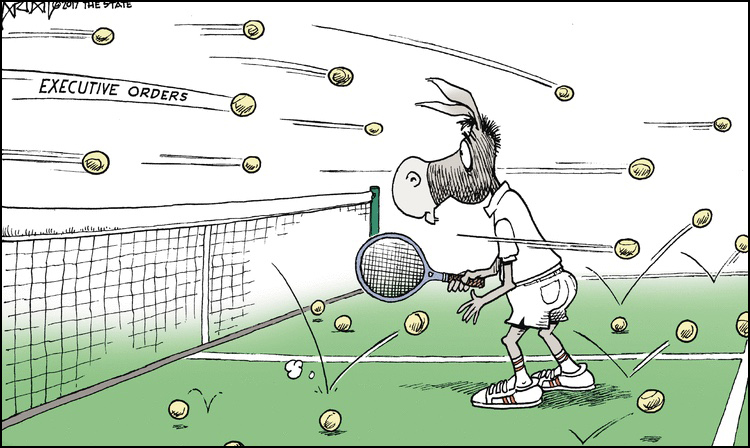 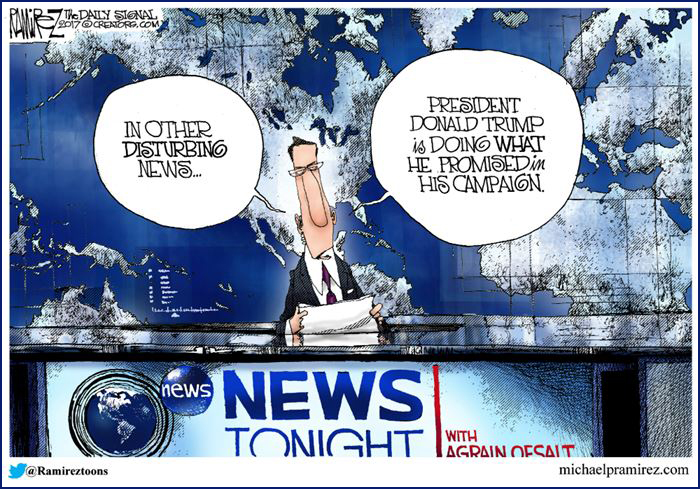 1. b) symbol: An object, character, figure, place, or color used to represent an abstract idea or concept.
The donkey in both represents the Democratic party.

c) understatement: A figure of speech (or illustration) in which statements (meanings) are purposely understated. It may be used to indicate the speaker’s nonchalance (or obliviousness) regarding an often important or otherwise remarkable situation. It often results in irony where, for instance, the speaker’s response to an event does not match how the viewer expects the speaker to react.

d) hyperbole: An extreme magnification or exaggeration of actuality. It blows something completely out of proportion for a distorted effect. The purpose of hyperbole is to create a larger-than-life effect and overly stress a specific point. (Used as a figure of speech in which exaggeration is used for emphasis or effect, as in “I could sleep for a year” or “This book weighs a ton”)

e) parody – known by also as a spin-off or spoof, a parody is an imitation of another’s work, usually in a humorous way to poke fun at the original work. Usually, for a better effect, a parody makes fun of a famous or well-known piece of work, so the audience has a better chance of recognizing the original.

3. Ramirez’s point is that instead of reporting uncritically or objectively — or optimistically that President Trump is keeping the promises he made to voters when campaigning, the media is upset that he is carrying out his promises to the voters who elected him.