NOTE: “Safe Space” is a fairly new term which typically refers to areas on university campuses where perceived bigotry toward victim groups, harassment or disagreement about politics is not tolerated. While advocates laud safe spaces as sanctuaries for those who are discriminated against, critics have argued they promote anti-intellectual attitudes and stifle free speech.

1. What device does the cartoonist use to highlight this trend on college campuses?
a) caricature
b) sarcasm
c) symbol
d) understatement
e) hyperbole 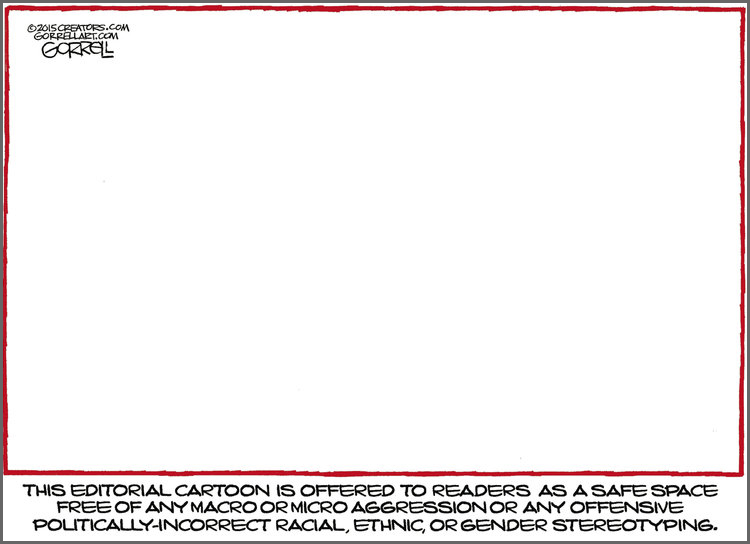 In response to recent student protests at the University of Missouri, the University Police Department (MUPD) is asking “individuals who witness incidents of hateful and/or hurtful speech” to call the police immediately and photograph the individuals involved, allowing the university to “take disciplinary action” against offending students.

Last month at Yale, an e-mail was sent telling students not to wear costumes that could be deemed offensive. Yale’s Silliman College Master Nicholas Christakis’ wife, a lecturer at Yale responded in an e-mail that she was concerned the university was becoming a place “of censure and prohibition.”
Christakis, defended his wife’s comments. Many students angrily confronted him and are now demanding both Christakis and his wife resign.

1. b) sarcasm: A form of verbal (or visual) irony in which it is obvious from context and tone that the speaker means the opposite of what he or she says.

The cartoonist did not use:
a) caricature: A description or characterization that exaggerates or distorts a character’s prominent features, usually for purposes of mockery. For example, a cartoon of a gaunt Abraham Lincoln with a giant top hat, a very scraggly beard, and sunken eyes could be considered a caricature.