An editorial cartoonist often uses humor to illustrate a new item.  In addition to the departure of Apple’s mobile software head, what recent news item is Jerry Holbert illustrating in this cartoon?
a)  Mr. Forstall wore the same striped shirt to two Apple events
b)  Mr. Forstall is notoriously bad with directions and frequently gets lost even in his own office building
c)  the dismal failure of Apple maps as a supposed better option to Google Maps
d)  Mr. Forstall secretly used Google Maps for all of his directions 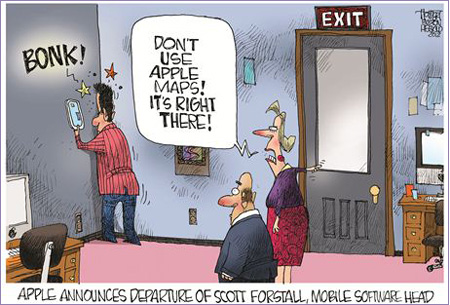 [Scott Forstall was Apple’s head of iOS.  Mr. Forstall’s team had been working to replace Google Maps on the iPhone for years. After Apple released its software to the public in September, users immediately complained about data inaccuracies and other bugs.  Mr. Forstall has spent time in recent weeks working with his team to improve Apple Maps, which the company built to gain independence from a similar service run by Google Inc. Some people familiar with the matter said members of the team have acknowledged that in a rush to release the product, Apple postponed fixing too many known bugs and errors. (Forstall also led the development of Siri.)]
Recent Editorial Cartoons