MLB Commissioner Rob Manfred without warning moved baseball’s All-Star Game out of Atlanta after the Georgia Legislature passed changes to the state’s voting laws. Progressives and Democrats claim the law restricts voting access in the state and will disproportionately affect Black voters.  — Among other things, the law requires voters to provide a photo ID when they submit an absentee ballot.

Biden has repeatedly referred to the law as “Jim Crow” or “Jim Crow on steroids”: Jim Crow laws were southern state and local laws that enforced racial segregation. They were enacted by white Southern Democrat-dominated state legislatures to disenfranchise and remove political and economic gains made by black people during the Reconstruction period.

Commissioner Manfred said he moved the game out of Georgia because ”Major League Baseball fundamentally supports voting rights for all Americans and opposes restrictions to the ballot box.”

The midsummer All-Star Game brings huge economic benefits to the city where it’s played. The players will get paid no matter where the game takes place. MLB will get the same television revenue. The people hurt by MLB Commissioner Rob Manfred’s decision will be Atlanta’s local businesses and tourism industry (hotels, restaurants, bars, tourist spots, kids attractions, retail stores).

The 2021 All Star Game was expected to bring $100 million into Atlanta businesses – many of which are black owned businesses.

1. Editorial cartoonist often use irony to illustrate a news story. Irony is defined as when the opposite of what you expect to happen occurs. Describe the irony in Mike Lester’s cartoon.

2. Commissioner Manfred, the MLB and the players will not suffer from changing the location. Only the local businesses will lose.  One reader reacted: “The consequences of his actions show that Manfred ‘didn’t think it through’ – he did not fully consider how his decision would affect Georgians.  He did not show careful thought or good judgment.  He bowed to activist pressure without even understanding the election law – or the harm his move would cause to small businesses (especially as they recover from the pandemic).  His actions show he is a man who has no business being the head of anything – he should not be the baseball commissioner.” What do you think? 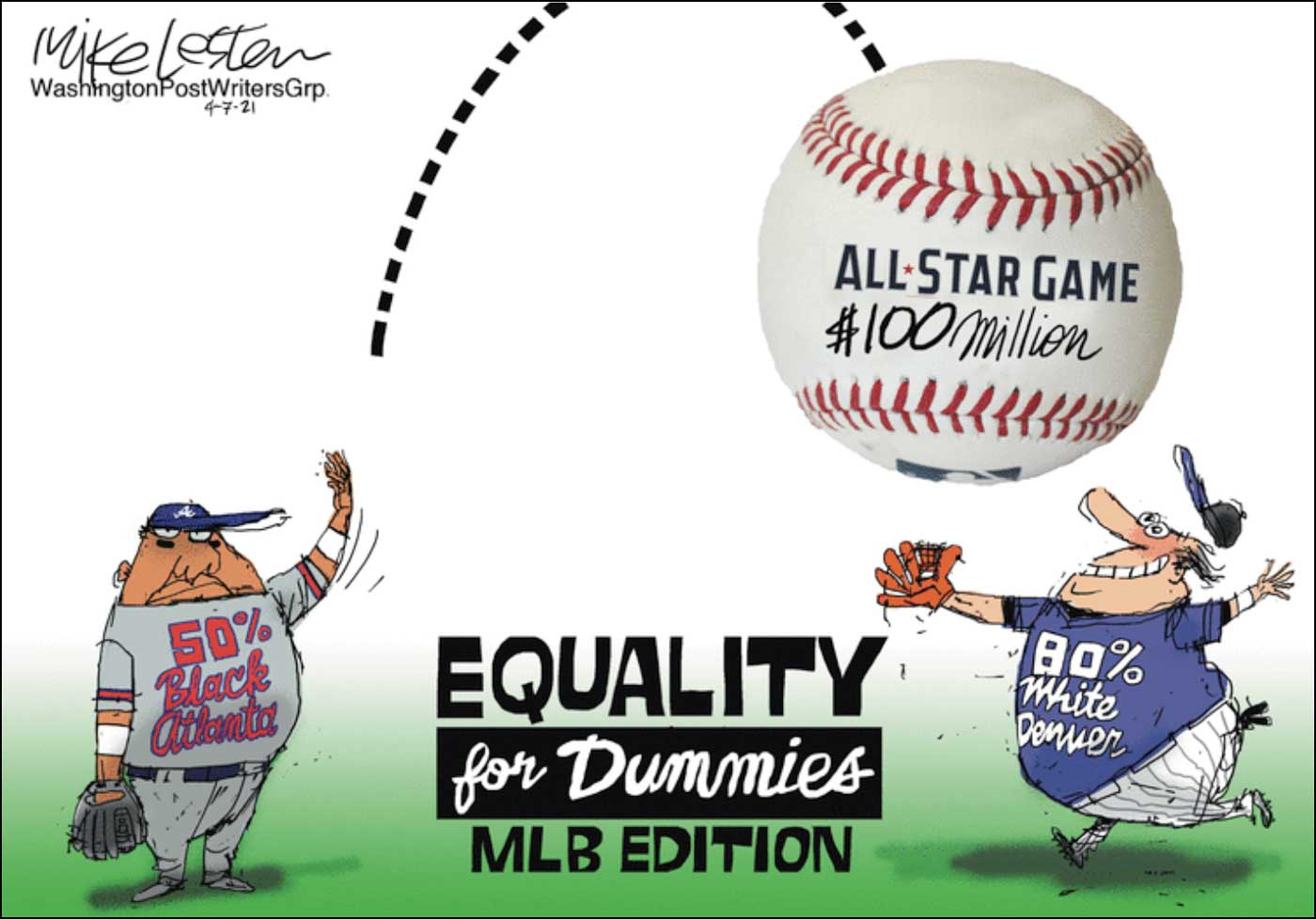 1. Manfred moved the game out of Georgia for passing a law he wrongly/mistakenly claims hurts blacks. Atlanta businesses, including black owned businesses, will take the loss. Ironically, Manfred is moving the game to Denver, giving the $100 million economic boon to mostly white businesses.