What did former Vice President Al Gore say in his speech in Saudi Arabia that denigrated the U.S.? 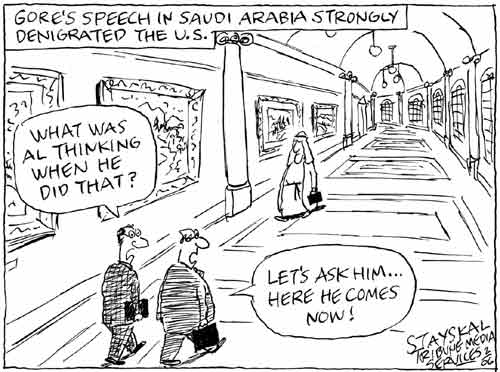 Cartoon posted with permission from the artist and CybercastNewsService.com

Former Vice-President Al Gore said in his speech in Jeddah, Saudi Arabia (at the 7th Jeddah Economic Forum on 2/12/06) that the U.S. government committed “terrible abuses” against Arabs after the Sept. 11, 2001, attacks.  He said: “[Arabs in the United States had been] indiscriminately rounded up, often on minor charges of overstaying a visa or not having a green card in proper order, and held in conditions that were just unforgivable…Unfortunately there have been terrible abuses and it’s wrong…I do want you to know that it does not represent the desires or wishes or feelings of the majority of the citizens of my country.”