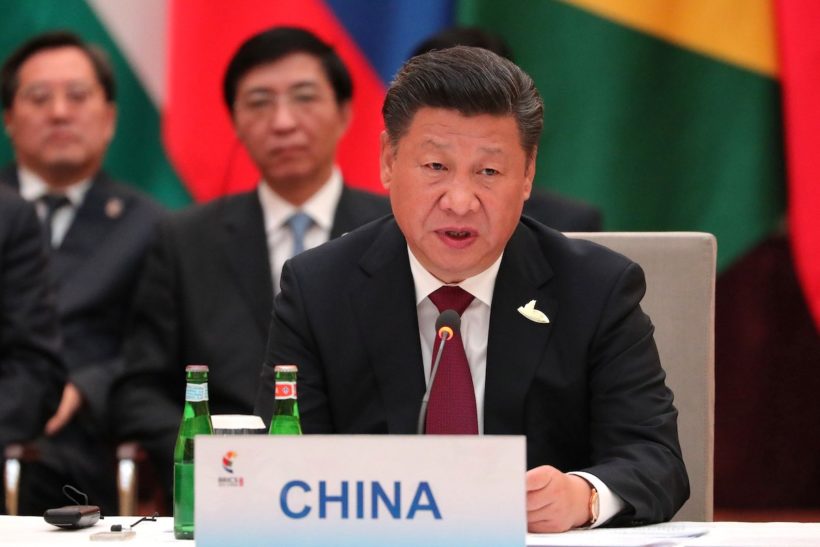 Esper cast China as a rising threat to world order – saying the world’s most populous nation steals Western know-how, intimidates smaller neighbors and seeks an ‘advantage by any means and at any cost.’

“It is essential that we — as an international community — wake up to the challenges presented by China’s manipulation of the long-standing international, rules-based order that has benefited all of us for many decades,” he said at the Munich Security Conference.

Esper emphasized the U.S. doesn’t want a conflict with Beijing and that the world is too interconnected for that. But he criticized China’s aggressive economic policy and its military expansion.

Under President Xi Jinping, the country is moving further in the wrong direction, he said.

…Esper used his address to the international security conference in Munich to give his most comprehensive condemnation yet of the communist country that he said tops the Pentagon’s list of potential adversaries, followed by Russia, ‘rogue states’ like North Korea and Iran, and continuing threats from extremist groups.

“The Chinese Communist Party is heading even faster and further in the wrong direction – more internal repression, more predatory economic practices, more heavy-handedness, and most concerning for me, a more aggressive military posture,” he said.

Esper’s comments were made after the U.S Justice Department hit China’s Huawei with 16 new criminal charges where it accused the Chinese tech giant of “plotting to steal state secrets.”

The new charges, which were unsealed on Tuesday, detail a brazen decades-long scheme to steal trade secrets from at least six U.S. companies. Cisco and T-Mobile are among the alleged victims in the case, though the companies are not actually named in the new indictment.

The U.S has also named the company’s CFO, Meng Wanzhou, in the charges. She is currently fighting extradition to the U.S from Canada.

National security adviser Robert O’Brien has also accused Huawei of building secret back doors into its hardware that allow it to covertly access mobile-phone networks around the world.

Officials said this back door allows the company to access network data without the carrier’s knowledge, potentially giving the Chinese government a potent spy tool.

In his speech, Secretary Esper noted that the U.S. government has provided medical supplies to help China combat the coronavirus outbreak that has infected over 67,000 people. Still, he said Beijing has made clear its long-term intentions and said Europe and the rest of the world must ‘wake up’ to the threats that China poses.

“The Communist Party and its associated organs, including the People’s Liberation Army, are increasingly operating in theaters outside its borders, including Europe, and seeking advantage by any means, and at any cost,” he said.

“While we often doubt the transparency and forthrightness of Beijing, when it comes to their security aims, we should take the Chinese government at its word. They have said that by 2035, the PRC intends to complete its military modernization, and, by 2049, it seeks to dominate Asia as the preeminent global military power.”

“We can’t let information go across networks that we don’t have confidence won’t be hijacked by the Chinese Communist Party. It’s just unacceptable.”

Chinese Foreign Minister Wang Yi dismissed Esper and Pompeo’s comments Saturday as “lies” and maintained that the country has the “right to develop” without interference from Washington.

“The root cause of all these problems and issues is that the U.S. does not want to see the rapid development and rejuvenation of China, and still less would they want to accept the success of a socialist [communist] country,” Wang said at the conference. “The most important task for China and the U.S. is to sit down together to have a serious dialogue and find a way for two major countries with different social systems to live in harmony and interact in peace. China’s ready and we hope the U.S. will work with us.”

NATO Secretary-General Jens Stoltenberg told the Munich Security Conference that China presents both challenges and opportunities for the West. He said the U.S. and Europe must agree on a unified approach to address China’s increasing global influence.

Compiled from articles by the UK Daily Mail, VOA News, The Hill and CBSNews on February 15. Posted here for educational purposes only.

2. What specifically did Defense Secretary Mark Esper accuse the communist government of China of doing?

3. How did the Chinese government respond to Secretary Esper’s warning?

4. Why is it important for the international community to be united in addressing communist China?

Watch a report from Reuters/VOA:

Read a Jan. 16 report, “U.S. steps up pressure on UK ahead of Huawei decision” (see “Background” and “Resources” for detailed info)