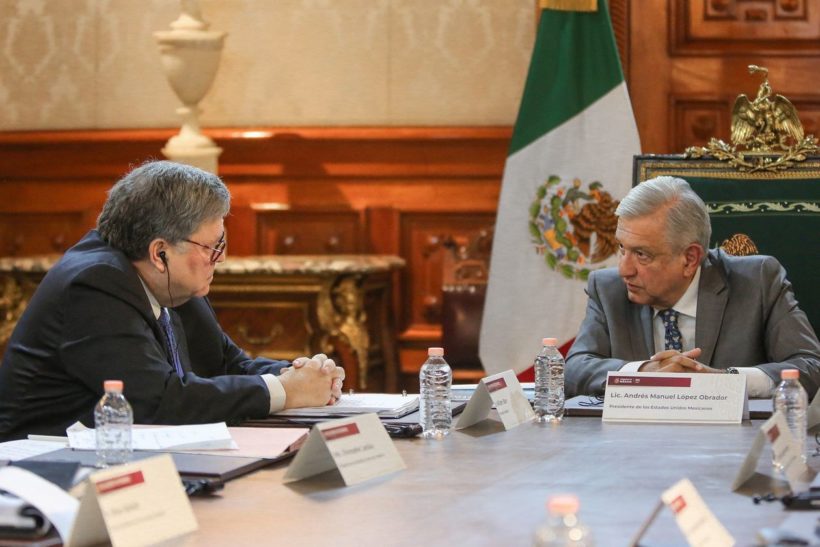 (by José de Córdoba in Mexico City and Sadie Gurman in Washington, The Wall Street Journal) — Mexican President Andrés Manuel López Obrador, under pressure from the Trump administration, has [revised] his strategy to fight drug cartels, including bringing the marines, Mexico’s elite security force, back to the front lines of the drug war.

“We are operating again,” said a senior Mexican navy officer. “The targets we need to go after have been defined.”

The change in strategy comes amid growing alarm in Washington at Mexico’s failure to crack down on drug gangs, particularly after the November massacre of nine U.S. citizens by suspected cartel hit men. Preliminary Mexican government figures indicate an increase in the number of murders in Mexico last year, after a record 36,685 in 2018.

U.S. Attorney General William Barr has taken a lead role in pushing for changes by the Mexican government, including to bring the marines back to counternarcotics enforcement and accelerate the extradition of suspects wanted for crimes in the U.S., according to people familiar with the matter.

As Mexico ramps up its efforts, the U.S. has agreed to step up actions to prevent guns from being smuggled into Mexico, these people said. 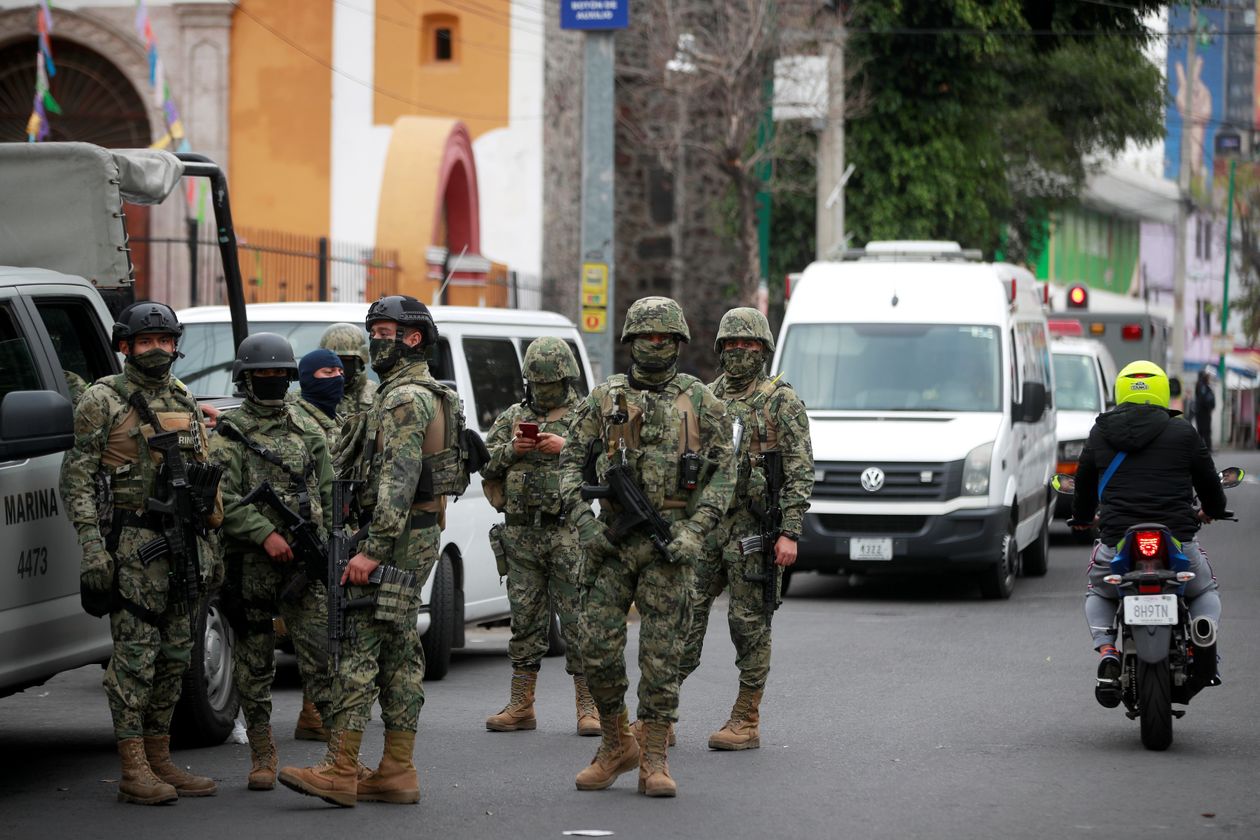 Mexican marines in October, during a raid on clandestine tunnels and alleged drug laboratories in Mexico City. (Photo: Stringer/Reuters)

Mexico’s marines, the security force that U.S. officials say they trust the most, were behind most high-profile arrests and killings of cartel leaders in the past two decades, including twice capturing drug lord Joaquín “El Chapo” Guzmán.

The elite navy force was largely sidelined by President López Obrador soon after he took office in late 2018, part of a strategy by the new government to halt the pursuit of top cartel figures and focus instead on attacking poverty—an approach it dubbed “hugs, not bullets.” (The political party the president founded describes itself as a “democratic left-wing party”.)

Last year, the marines took part in few counternarcotics operations. But in recent weeks, marine units have been involved in a flurry of high-profile arrests, including of the head of a Mexico City cartel and close relatives of two major drug lords.

The “hugs, not bullets” approach appears to be changing, said Eduardo Guerrero, a Mexico-city based security consultant. “I expect the Americans to take a very proactive role in pushing Mexico to confront the most powerful groups, especially the Sinaloa and the Jalisco New Generation cartels,” he said.

The U.S. pressure on Mexico began to rise quickly in November after three mothers and six of their children, all U.S. citizens living in a fundamentalist Mormon community in the northern state of Sonora, were killed in an ambush by gunmen suspected of belonging to a local drug cartel. Rival cartels are fighting for control of the area where the victims lived.

After the massacre, President Trump said the U.S. would designate Mexico’s drug cartels as foreign terrorist organizations, a move that Mexico strongly opposed. (See “U.S. to designate drug cartels as terrorists“)  The president suspended the decision after Attorney General Barr met with senior officials during a trip to Mexico in December.

A spokesman for the López Obrador administration insisted any actions Mexico has made, including actions to work with the U.S., have been in Mexico’s own interests and not because of U.S. pressure. …..

Returning the marines to the front lines of the drug war is a turnaround for the Mexican president, who campaigned for years on the idea that successive Mexican governments had made a big mistake by arresting drug lords, moves which often spawned bloody succession battles and drove up Mexico’s murder rate. “You can’t fight fire with fire,” the politician often said.

But as the government pulled back, drug gangs have gained strength, in some areas rivaling the state for power. In October, hundreds of gunmen from the Sinaloa cartel overpowered Mexican security forces and terrorized the Sinaloa state capital of Culiacán for hours in an ultimately successful effort to free a captured cartel leader, Ovidio Guzmán, a son of “El Chapo.” (See “Mexico admits bungled arrest of kingpin’s son after mayhem“)

At the time, Mr. López Obrador said Mexico had freed the younger Guzmán to prevent a bloodbath. But U.S. officials said Mexico’s action had highlighted the government’s weakness and set a dangerous precedent for the country’s drug barons to follow.

“The state is surrendering,” a senior U.S. official said at the time.

Mexico’s marines weren’t involved in the botched operation to arrest the younger Guzmán. But they were back in action in Culiacán in January, when a marine helicopter swooped down on an apartment complex and seized a local drug lord, the nephew of one of the longtime leaders of the Sinaloa cartel, Rafael Caro Quintero. The operation went off without a hitch. …..

Published by wsj .com on February 7, 2020. Updated Feb. 7, 2020 3:25 pm ET. Reprinted here for educational purposes only. May not be reproduced on other websites without permission from The Wall Street Journal.

2. For MEXICO:
a) list the who, what, where and when of the news item
b) What strategy had newly elected President López Obrador implemented in fighting Mexico’s drug cartels?
c) What was the outcome of President López Obrador’s drug-fighting strategy?
d) What two main changes to President López Obrador strategy did U.S. Attorney General William Barr ask him to make?
e) How has the resumption of using marines in fighting the drug cartels worked thus far?
f) What action has the U.S. agreed to take on our part?
g) From the WSJ report:
“The U.S. pressure on Mexico began to rise quickly in November after three mothers and six of their children, all U.S. citizens living in a fundamentalist Mormon community in the northern state of Sonora, Mexico were killed in an ambush by gunmen suspected of belonging to a local drug cartel. Rival cartels are fighting for control of the area where the victims lived.”
After the massacre, President Trump said the U.S. would designate Mexico’s drug cartels as foreign terrorist organizations, a move that President López Obrador strongly opposed. Mr. Trump suspended the decision after Attorney General Barr met with senior officials during a trip to Mexico in December.
What do you think of this insistence that President López Obrador reverse his “hugs” approach to dealing with murderous drug cartels? (too forceful? necessary? etc.) Explain your answer.

More from the WSJ article above:
Attorney General Barr has made two trips to Mexico City in recent months, meeting with Mr. López Obrador and top law enforcement and security officials. The Justice Department, which declined to comment for this article, has said little publicly about Mr. Barr’s work in Mexico, only that his discussions have encompassed a broad range of issues including drugs, guns, human smuggling and improving cooperation in prosecuting gang leaders.

Mr. Barr, who made a return visit to Mexico in January, has also urged Mexico’s government to increase efforts to take down fentanyl labs, and tighten controls on its seaports to curtail the entry of precursor chemicals used in the labs, to slow the opioid epidemic in the U.S., people familiar with the meetings said.

The U.S. is also pushing Mexico to accelerate deportations and extraditions of alleged criminals wanted for crimes in the U.S., these people said.

Mexico’s policy toward extradition has varied. At times, Mexico has insisted that alleged criminals face charges and do time in Mexico before being extradited to the U.S. But the government appears to be more willing to extradite alleged criminals to face U.S. charges before facing Mexican ones, according to people familiar with the matter.

The Mexican government, which describes its drug industry as a binational problem, said Foreign Minister Marcelo Ebrard has pressed the U.S. to increase its efforts to control the smuggling of guns, especially heavy weaponry used by drug cartels, which frequently are able to outgun security forces.

Both governments estimate that as much as 70% of heavy weapons used by the cartels come from the U.S.

“In different meetings, Mexico has shown U.S. officials empirical evidence of the strong relationship between weapons trafficking from the U.S. and the increase in Mexico’s murder rate in recent years,” the Foreign Ministry said in response to a question from The Wall Street Journal.

Both countries have agreed to set up a system of cross-border checkpoints to screen for weapons coming from the U.S., the ministry said.

Mr. López Obrador has come under pressure from the Trump administration before. Last year, Mr. Trump threatened to slap escalating tariffs on Mexican exports unless Mr. López Obrador curtailed the tide of Central American migrants traveling to the U.S. through Mexico.

The U.S. government has also told Mexico it would like to see changes aspects of its legal system to facilitate extraditions, specifically to dial back injunctions, known as “amparos,” that halt legal proceedings, according to a person familiar with the matter. In many cases, Mexican defense attorneys are able to get amparos to delay extradition.

“They want Mexico to shorten the process, not to file tens or hundreds of amparos” said Mike Vigil, a former head of international operations for the Drug Enforcement Administration.

The U.S. also would like the Mexican judiciary to facilitate the use of wiretap information in criminal trials, according the person familiar with the matter.

Such information is used infrequently because judges don’t quickly grant permission to use wiretaps, according to Mr. Guerrero, Police then use wiretaps without a judicial order, rendering the information unusable for trial, he said.