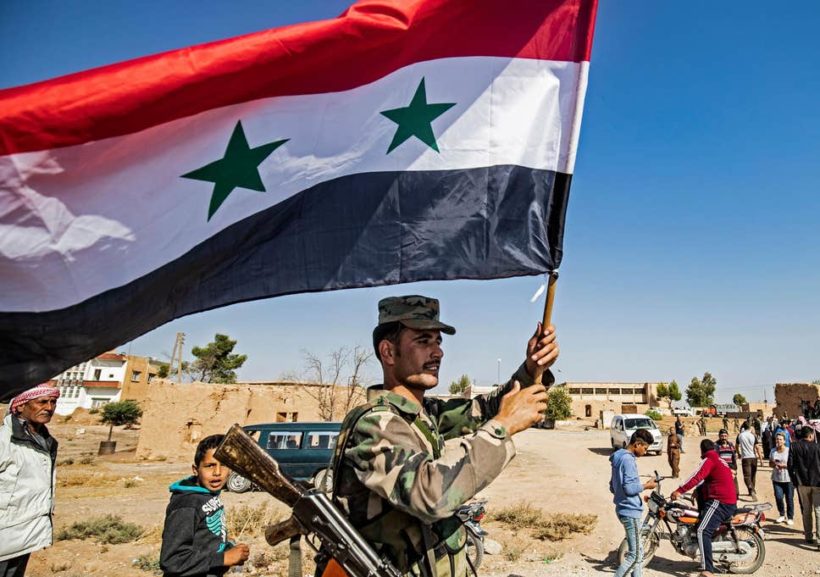 A Syrian regime soldier waves the national flag a street on the western entrance of the town of Tal Tamr in the countryside of Syria's northeastern Hasakeh province on Monday, Oct. 14. (Delil Souleiman/AFP-Getty Images/NBC)

The army deployment would support the Kurdish-led Syrian Democratic Forces (SDF) in countering “this aggression and liberating the areas that the Turkish army and mercenaries had entered,” it said, in reference to Turkey-backed Syrian rebels.

It would also allow for the liberation of other Syrian cities occupied by the Turkish army such as Afrin, the statement said. The Turkish army and its Syrian rebel allies drove Kurdish forces from Afrin in 2018.

The agreement follows last week’s move by the United States to pull a group of its forces from a section of the border, opening the path for Turkey’s incursion.

The SDF, a vital US ally in the campaign against Islamic State, has called Washington’s move “a stab in the back.”

“In order to prevent and block this (Turkish) assault agreement has been reached with the Syrian government – whose duty is protect the borders of the country and to protect Syrian sovereignty – for the Syrian army to enter and deploy along the length of the Syrian-Turkish border,” the statement said.

Kurdish-led forces have established control over swathes of eastern and northern Syria since the country descended into civil war in 2011, setting up their own governments but always saying their aim was autonomy rather than independence. [Kurds in Iraq and Turkey say they want independence. Most likely all Kurds would prefer their own state; independence.] 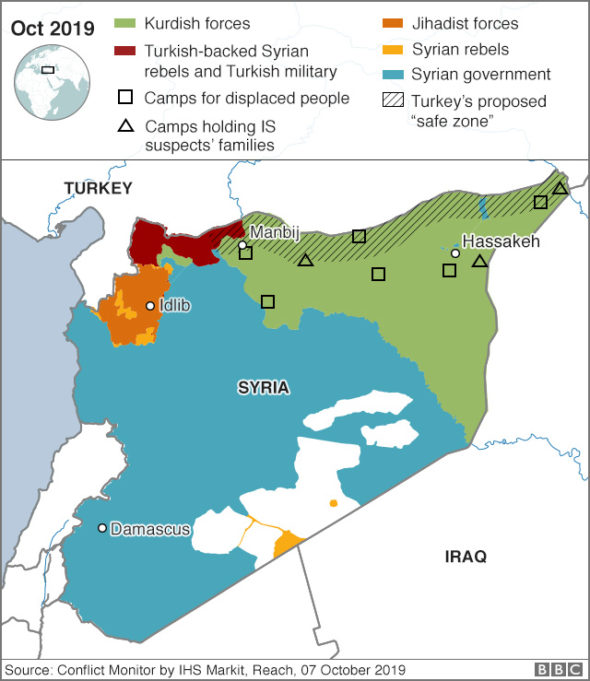 Despite mutual enmity between these Kurdish groups and Damascus, where the Baathist government systematically persecuted Syrian Kurds, the SDF has seldom clashed with the Syrian government during the war [as both were fighting Islamic State terrorists].

The sides have also at times appeared to coordinate military campaigns against shared enemies, notably the Turkey-backed rebels taking part in the offensive with the Turkish army.

Published by Reuters .com on October 14, 2019. Reprinted here for educational purposes only. May not be reproduced on other websites without permission from Thompson Reuters.

2. For SYRIA:
a) list the who, what, where and when of the news item
b) What is the purpose of the alliance between these two groups that are usually enemies? Be specific.
c) Why have the Syrian government forces and the Kurdish-led Syrian Democratic Forces (who are enemies) established an agreement to work together?
d) Read the “Background” below and watch the videos. This is a very complicated issue. Many foreign policy experts, world leaders and Republican politicians oppose President Trump’s decision and say he is abandoning our allies the Kurds and making the worst decision he could possibly make. Some questions to consider:

e) President Trump has said he would impose economic sanctions on Turkey and Turkish officials for offenses against the Kurds. Will this work? Is this a good idea? Explain your answer.
f) Senator Rand Paul says the U.S. withdrawal will force the Kurds and Syria to establish a peace deal. What do you think of his comments?
g) From a commentary by Brad Polumbo, Washington Examiner, Oct. 7:

Syria will continue to be a bloody disaster zone with deaths on all sides either way, and it may be true that leaving puts the Kurds in danger. But we should leave anyway. U.S. foreign policy exists to put America first, and we did not enter Syria or return to Iraq in order to establish a Kurdish state. We never promised the Kurds our ongoing protection or aid in a war of independence in northern Syria. Our own goals and interests should always dictate our military decisions. To risk U.S. lives to police the outcome of the Syrian conflict, which will continue to be extremely bloody no matter what, puts American interests last in a failed attempt to continue policing the world.

As Afghanistan veteran William Ruger told me in a statement: “It is not America’s job to sort out the future of Syria. We were in Syria for a very limited reason — to eliminate ISIS’s territorial caliphate. We have accomplished that goal, so now it is time to bring our troops from that country home.

What do you think of Mr. Polumbo’s assertions? Does the U.S. have a responsibility to stay in Syria long-term to help the Kurds? To prevent ISIS from re-emerging? (Agree/disagree?)

Why has Turkey launched an assault on the Kurds?

One main reason: Turkey considers the biggest militia in the Kurdish-led alliance a terrorist group. It says it is an extension of a Kurdish rebel group fighting in Turkey.

Turkey has vowed to push back from its border members of a Syrian Kurdish militia called the People’s Protection Units (YPG).

Turkish leaders view the YPG as an extension of the banned Kurdistan Workers’ Party (PKK), which has fought for Kurdish autonomy in Turkey for three decades.

The YPG dominates an alliance of Kurdish and Arab militias called the Syrian Democratic Forces (SDF), which has driven IS out of a quarter of Syria over the past four years with the help of air strikes by a US-led coalition.

Turkey has carried out two cross-border offensives against the Kurdish forces.

In early 2018, it attacked the Kurdish enclave of Afrin, in western Syria. Dozens of civilians were killed.

In December 2018, with IS close to defeat, President Donald Trump said the US would begin withdrawing troops from Syria. When commanders and allies expressed concern about the fate of the Kurds, he proposed creating a “20-mile safe zone” along the border.

In August, the US and Turkey agreed to establish one together, but called it a “security mechanism”. The YPG complied and began dismantling border fortifications.

But two months later, Mr Erdogan warned Mr Trump that Turkey was going to set up a safe zone alone.

Mr Trump said US troops would withdraw from the border area and that Turkey would be responsible for all IS militants detained by the SDF.

Mr Erdogan is confident his proposed 480km-long corridor will ensure Turkey’s border security and become home to between 1 and 2 million Syrian refugees.

The SDF said it had been “stabbed in the back” by the US, and warned that a Turkish offensive would create a “permanent warzone” and reverse the defeat of IS. (from BBCNews)

Read last week’s “Background” on the president’s decision to withdraw our troops from Syria.

Republican Sen. Lindsey Graham of South Carolina (who usually agrees with Trump policies) said President Trump’s decision “virtually reassures the reemergence of ISIS” and called it “so sad” and “so dangerous.” Republican Sen. Marco Rubio of Florida called the move a “grave mistake” and warned about the supposed consequences it will have worldwide.

Fellow Republican Senator Rand Paul, a libertarian who half the time disagrees with Trump policies, holds a different view: