World #3 – U.S. to withdraw from Syria before Turkish operation 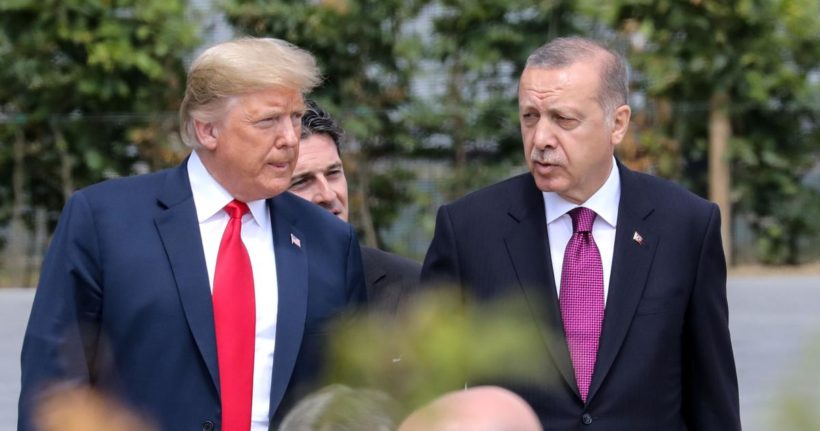 (by Yaron Steinbuch, New York Post) – US troops on Monday began pulling out of positions along the border in northeast Syria ahead of an expected invasion by Turkey….

The development comes hours after the White House announced that “Turkey will soon be moving forward with its long-planned operation into Northern Syria.”

“The United States Armed Forces will not support or be involved in the operation,” a statement read. “Turkey will now be responsible for all ISIS fighters in the area captured over the past two years in the wake of the defeat of the territorial ‘Caliphate’ by the United States.”

A senior Turkish official told Reuters that his country is highly likely to wait until American forces have withdrawn before launching an offensive to avoid “any accident” — adding that it will take US troops about a week to clear the planned area of operations. …

There was no immediate confirmation from the White House on Monday of movements by US troops in northern Syria.

Turkish President Recep Tayyip Erdogan also said the US forces have started withdrawing from positions — and a video posted by a Kurdish news outlet showed a convoy of American armored vehicles apparently pulling out of the border area of Tal Abyad.

Erdogan didn’t elaborate on the planned Turkish invasion but said Ankara was determined to halt what it perceives as threats from the Syrian Kurdish fighters, whom Turkey considers a terrorist group.

The Syrian Democratic Forces (SDF) — as the Kurdish-led force is known — said the US pullout began first from areas along the Syria-Turkey border.

“The American forces did not abide by their commitments and withdrew their forces along the border with Turkey,” the SDF said in a statement. “Turkey now is preparing to invade northern and eastern parts of Syria.” …

In an agreement between Ankara and Washington, joint forces had been patrolling a security zone that covers about 80 miles along the border between the towns of Tal Abyad and Ras al-Ayn.

Turkey and the US disagreed over the depth of the zone, with Ankara seeking to also have its troops monitor a stretch of territory between 19 and 25 miles. Despite the agreement, Erdogan had continued to threaten an assault.

The Kurdish-led fighters have been the main US-backed force in Syria in the fight against ISIS, and in March, the group captured the last bit of territory held by the jihadists, marking the end of the so-called caliphate that was declared by ISIS leader Abu Bakr al-Baghdadi in 2014.

“We will not hesitate for a moment in defending our people” against Turkish troops, the Syrian Kurdish force said, adding that it has lost 11,000 fighters in the war against the terror group in Syria.

A Turkish attack would lead to a resurgence of ISIS, whose sleeper cells are already plotting to break free some 12,000 extremists held by Syrian Kurdish fighters in northeastern Syria in a “threat to local & international security,” it said.

From nypost .com, with wire services.  Reprinted here for educational purposes only. May not be reproduced on other websites without permission from the New York Post.

The president posted the following tweets relating to the U.S. announcement:

“The United States was supposed to be in Syria for 30 days, that was many years ago. We stayed and got deeper and deeper into battle with no aim in sight. When I arrived in Washington, ISIS was running rampant in the area. We quickly defeated 100% of the ISIS Caliphate including capturing thousands of ISIS fighters, mostly from Europe,” Trump wrote on Twitter.

He said Europe wouldn’t take back the captured fighters and tried to make the United States take responsibility for them, even if they were nationals of other countries.

“Europe did not want them back, they said you keep them USA! I said ‘NO, we did you a great favor and now you want us to hold them in U.S. prisons at tremendous cost. They are yours for trials.’ They again said ‘NO,’ thinking, as usual, that the U.S. is always the ‘sucker,’ on NATO, on Trade, on everything,” Trump wrote.

“The Kurds fought with us, but were paid massive amounts of money and equipment to do so.  They have been fighting Turkey for decades.  I held off this fight for almost 3 years, but it is time for us to get out of these ridiculous endless wars, many of them tribal, and bring our soldiers home,” he wrote.

“WE WILL FIGHT WHERE IT IS TO OUR BENEFIT, AND ONLY FIGHT TO WIN. Turkey, Europe, Syria, Iraq, Russia and the Kurds will have to figure the situation out, and what they want to do with the captured ISIS fighters in their ‘neighbourhood.’ They all hate ISIS, have been enemies for years.”

“We will fight where it is to our benefit, and only fight to win,” he wrote. 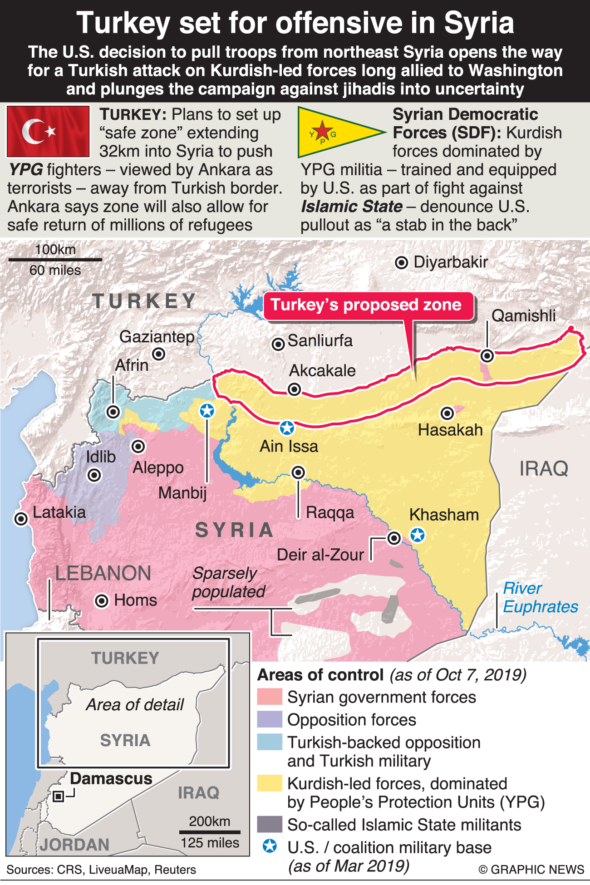 2. For TURKEY:
a) list the who, what, where and when of the news item
b) What did the U.S. say about the ISIS fighters captured and held by the Kurds in Syria?
c) This is a complex situation. Re-read President Trump’s tweets at the end of the article. Read ALL of the “Background” below. Watch the news reports below (and others you see). What do you think? Is this the right decision? Explain your answer.
d) Ask a parent the same question from c). Discuss your answers.

Read excerpts from commentaries explaining/supporting the president’s position below.  (For opposition to Trump’s move, see any news outlet.)
What do you think? Read the following:

One school of critics predicts that in the absence of American military involvement, ISIS will make a comeback. This is a worthwhile concern, and worth taking seriously, seeing as something similar happened when former President Obama pulled troops out of Iraq in 2011.

But that’s not going to happen in Syria. As Trump rightly notes, an involved Turkey will have a strong security incentive not to allow ISIS to re-emerge. So too would regional neighbors such as Russia. And if a terrorism threat were to re-emerge, the U.S. does not need troops on the ground to step back in and fight it through remote strikes.

Think about it like this: Can we really justify endless occupation of a foreign country based on the idea that if we ever leave, a threat might emerge? That logic would have us occupy everywhere, all the time.

The other chief concern, as pointed out by my Washington Examiner colleague Tom Rogan, is that by pulling out, we will condemn our allies, the Kurds, to death at the hands of merciless Turkish forces.

Syria will continue to be a bloody disaster zone with deaths on all sides either way, and it may be true that leaving puts the Kurds in danger. But we should leave anyway. U.S. foreign policy exists to put America first, and we did not enter Syria or return to Iraq in order to establish a Kurdish state. We never promised the Kurds our ongoing protection or aid in a war of independence in northern Syria. Our own goals and interests should always dictate our military decisions. To risk U.S. lives to police the outcome of the Syrian conflict, which will continue to be extremely bloody no matter what, puts American interests last in a failed attempt to continue policing the world.