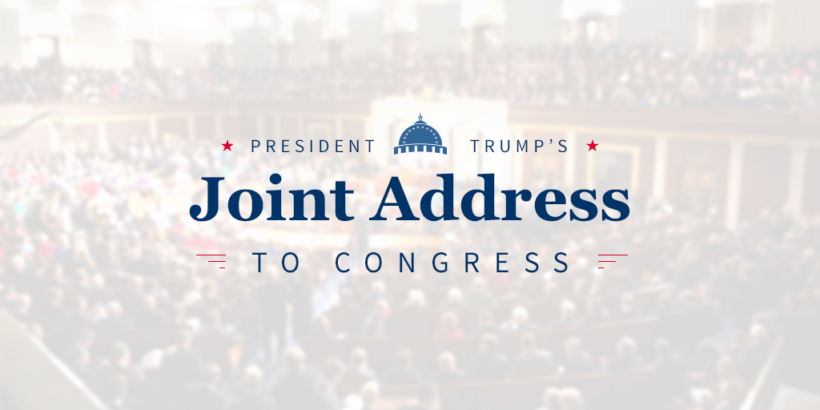 NOTE: President Donald J. Trump will be delivering his first address to a Joint Session of Congress tonight at 9 p.m.  In it, the President will be sharing his vision for the country.

WASHINGTON (CNN) – President Donald Trump is set to give an address to a joint session of Congress [tonight] — but it technically won’t be his first State of the Union address.

Mr. Trump isn’t shaking up any traditions…but is instead following what past presidents have done before him. His speech will be known as an “address to a joint session.”

Traditionally, a president of the United States should be in office for a year before they give their first State of the Union address.

In a State of the Union address, the president usually reflects back on the past year and how the nation is doing, as well as uses the opportunity to highlight the administration’s legislative agenda — which needs congressional support — and priorities for the country.

The Constitution states that the president “shall from time to time give to the Congress information of the State of the Union, and recommend to their consideration such measures as he shall judge necessary and expedient.”

However, [as with previous presidents], it is expected that President Trump will use Tuesday’s speech to continue outlining his goals for his administration.

(from WhiteHouse.gov) – President Trump will address Congress and the American people on Tuesday night:

Where: The United States Capitol in the House Chamber, also known as the “Hall of the House of Representatives.”

Who: The President will address Members of both the House of Representatives and Senate in his first address to a Joint Session of Congress.

The Speech: President Trump is keeping the tradition of previous Presidents by delivering a formal address to a Joint Session of Congress during his inaugural year, and will deliver his first State of the Union address in 2018. The President will deliver his speech from the Speaker’s rostrum.

How to watch: The address will be streamed live at whitehouse.gov/joint-address

How to participate: Follow along live on Twitter @WhiteHouse and @POTUS for real-time information before, during and after the speech. The speech will also be live streamed at facebook.com/WhiteHouse.

During his first Joint Address to Congress, the President will communicate his vision for the future of the country directly to the American people as he moves forward with his plans to take on the many challenges facing this nation. Building on his inaugural address, President Trump will continue to lay out his agenda to Make America Great Again. …

Find out more about the President’s Executive Actions

View the legislation President Trump has signed into law

3. What is the purpose of this address?

CHALLENGE — WITHOUT listening to any comments by the media, watch President Trump’s address to Congress and the American people and answer the following questions.

1. Tone is the attitude a speaker takes towards a subject. What was the tone of President Trump’s address? (optimistic, hopeful, energetic, even-tempered, pessimistic, discouraging, lethargic, bombastic, etc. …) Explain your answer.

2. What did the President say about the following: (What is his plan/purpose?)
[Print out our PDF worksheet “Trump to address Congress” and fill in the answers for a) to f)]

4. a) Do you think the President is focusing on the correct issues in his first 100 days? Explain your answer.
b) Ask a parent the same question.

NOTE TO STUDENTS: As with Presidents Obama, Bush, Clinton, et al, generally, half of the country supports President Trump and half of the country does not. Trump supporters increasingly report that they are intimidated or pressured into silence about their views. This is wrong. Remember to be civil with one another when discussing politics.

Watch a Monday Feb. 27 news report
“What you need to know Trump’s address to Joint Session of Congress:”