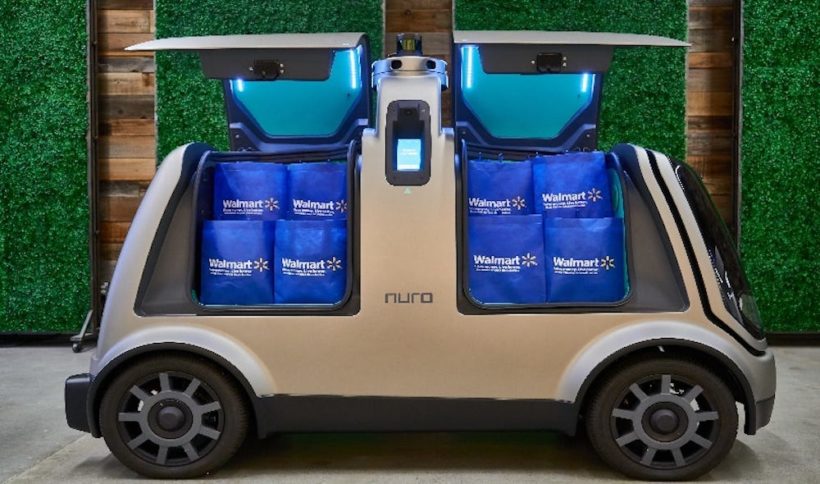 The nation’s largest retailer announced Tuesday a pilot program in Houston with autonomous vehicle maker Nuro to deliver groceries in vehicles that don’t require a human driver. Nuro, based in Mountain View, California, was founded by engineers who once worked at Google’s self-driving vehicle project in 2016.

“We’ve been test-driving a number of different options for getting groceries from our stores to our customers’ front doors through self-driving technology,” said Tom Ward, senior vice president of digital operations for Walmart U.S., in a statement.

“By continuing to test autonomous vehicle capabilities, we’re better able to understand the path self-driving technology can take us down the road,” said Tom Ward, Walmart’s SVP of digital operations, in a statement.

The Nuro is a delivery van resembling a moving toaster and requires consumers to retrieve their groceries directly from the vehicle.

Nuro has been mapping parts of Houston for its autonomous vehicles for months now, according to the Washington Post, as it has been testing its grocery delivery program. That work was being done with Toyota Priuses, which will continue, but this week’s announcement is about a new phase that will introduce the company’s custom-built vehicle, known as the R2, to the mix. The R2 driverless van can hold around 12 bags of groceries and is designed to travel on public roads, not sidewalks or bike lanes.

The R2 has two separate bins that are unlocked by customers using a touchscreen keypad and a code to access their order. The van was designed to look friendly and not put the grocery bags at too high or low a level for customers to take them out when it pulls up to your home.

Walmart is among several businesses fighting for dominance in the rising grocery delivery business. Amazon boasts its own competing service, while Target partners with service Shipt to offer grocery delivery. There’s also Instacart, which works with various stores to deliver goods.

For now, to participate in the Houston autonomous vehicle (AV) deliveries, customers have to opt in, and even then Nuro is only delivering from a few “select” area Walmart stores. Nuro says it will expand its robot delivery service to the general public later in 2020.

Nuro tested AV grocery deliveries at Fry’s stores in Scottsdale, Arizona for nine months starting in 2018 and charged customers $5.95 per delivery. The New York Times says that “thousands” of customers took advantage of the R1’s delivery service. Nuro also announced earlier this year that it will start delivering pizzas with Domino’s in Houston soon.

Compiled from articles by Brett Molina at USAToday and Sebastian Blanco at Forbes on Dec. 10. Reprinted here for educational purposes only. May not be reproduced on other websites without permission.

2. What is the Nuro? How does this delivery service work?

3. What other companies also deliver groceries to customers’ doors?

4. When will the autonomous delivery option be available to a larger group of customers?

5. What other delivery service does Nuro plan to launch in Houston?

6. What do you think: will autonomous delivery replace grocery shopping in stores in the near future? Explain your answer.

“Our unparalleled size and scale has allowed us to steer grocery delivery to the front doors of millions of families – and design a roadmap for the future of the industry,” said Tom Ward, Walmart’s SVP of digital operations, in a statement.