(by Stu Woo, WSJ.com) – A volcano in Alaska erupted five times on Sunday night and Monday morning, forcing flight cancellations and delays in Anchorage as it spewed ash 60,000 feet high.

Scientists at the Alaska Volcano Observatory say Mount Redoubt’s eruptions pose more of an inconvenience than a threat to residents, because they are taking place relatively far from populated areas. The closest city, Kenai, is 45 miles east, while Anchorage, Alaska’s most-populous city, is 100 miles northeast. 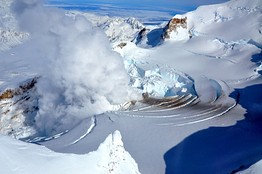 “Everybody’s prepared,” said Ronnie Sackett, a maintenance worker at the Moose Is Loose bakery in Soldotna, a small town on the Kenai Peninsula. “Once it starts rumbling, they get on their horse and do their thing.”

The eruptions have disrupted operations at Ted Stevens Anchorage International Airport, where many flights were canceled Monday. The Federal Aviation Administration has implemented a 40-mile-wide no-fly zone around the volcano, said operations manager Mark Brys.

Mr. Brys said about 1,500 flights depart from, arrive at or fly over the city daily, but far fewer were expected to do so Monday amid the eruptions. The few planes that did land at the airport reported no problems. Flights from the U.S. to Asia might have to alter their routes slightly, Mr. Brys said, because Mount Redoubt sits on a major international flight route.
The Alaskan Volcano Mount Redoubt has shown signs of pending approaching eruption for about two months now, and has finally erupted. Video courtesy of Reuters.

Scientists warn that the smoke, made of pulverized lava, could harm those with respiratory problems. A coating of ash about the thickness of a dime is expected to fall in mostly unpopulated areas north of the volcano, prompting officials to urge residents to limit outdoor exposure.

Experts expect Mount Redoubt to erupt again in coming days or weeks. A similar Alaskan volcano, Augustine, erupted at least a dozen times over several months in 2006, but caused few problems because of its remote location.

Scientists had been expecting Mount Redoubt to explode for months. In the late fall and early winter, the volcano began spouting steam and triggering earthquakes. The temblors began again Friday night, and the first eruption occurred about 10:38 p.m. Sunday. The fifth and most recent occurred at 4:31 a.m. Monday.

Mount Redoubt has gone through at least three periods of eruptions since 1900, most recently in 1989, when a KLM Boeing 747 flew into the plume of smoke and lost engine power. The pilot was able to restart the engines and land the plane safely.

If Mount Redoubt continues to erupt, delays in airport traffic could affect many Alaskans, Mr. Brys said. “That’s how we get a lot of groceries,” he said.

Write to Stu Woo at Stu.Woo@wsj.com.

1. The first paragraph of a news article generally answers the questions who, what, where and when. Answer those questions for this article.

2. Why do the eruptions of Mount Redoubt pose more of an inconvenience than a threat to residents?

3. How have the volcano’s eruptions affected air travel?

4. How many periods of eruptions has Mount Redoubt gone through in the past 110 years?

5. If eruptions continue to occur, what effect will it have on many Alaskans?

ALASKA’S VOLCANOES (from the Alaska Volcano Observatory website at avo.alaska.edu/volcanoes/about.php)

Go to wsj.com for video of the volcano before it erupted.

For updated news on Mount Redoubt, go to a local Alaska news channel at ktuu.com/Global/story.asp?S=10051900.