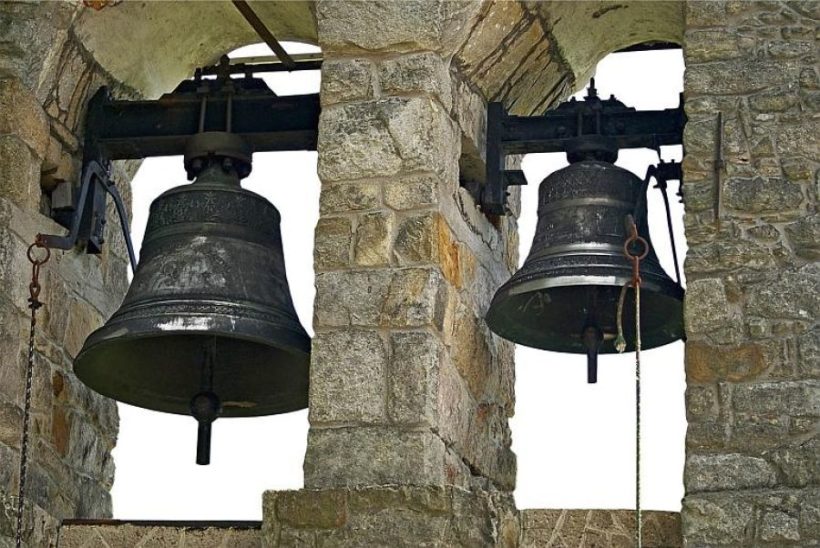 (by Carlos M. Vazquez II, Stars and Stripes) – Bells will ring out on military bases and in communities all over the world on the eleventh hour of the eleventh day of the eleventh month to mark 100 years since the end of World War I.

People can observe the centenary of the conflict’s end by joining Bells of Peace — a Veterans Day event also happening at churches, universities, cemeteries, ships at sea and war memorials worldwide.

Bells will toll 21 times at 11 a.m. Sunday in all time zones — exactly 100 years since the armistice that ended the Great War — to honor the 4.7 million Americans who served and 116,516 who died in the conflict, according to the event’s sponsor, the U.S. World War One Centennial Commission. [The 21 tolls of the bell symbolize the nation’s highest honor.  It is based on the 21-gun salute.]

“Two million of those men and women deployed overseas to the fight,” said Chris Isleib, a spokesman for the commission.

The goal is to enlist “the whole nation in the commemoration of the service of our WWI veterans,” said Betsy Anderson, who is coordinating Bells of Peace on behalf of the commission.

Secretary of the Navy Richard Spencer has ordered bells tolled on warships and installations, and military leaders from other branches have similar plans.

The Navy hopes the commemoration gives sailors “a sense of pride in their heritage and an understanding of the importance of the shipmates who have gone before them,” Alex Hays, a Naval History and Heritage Command spokesman told Stars and Stripes in an email.

As the bells ring, individuals may salute and observe a moment of silence. …

For more detailed information about the event, read the FAQs under “Backround” below the questions, and/or visit the U.S. WWI Centennial Commission website at worldwar1centennial.org.

From stripes .com. Reprinted here for educational purposes only. May not be reproduced on other websites without permission from Stars and Stripes.

Those with less of a sense of service to the nation never understand it when men and women of character step forward to look danger and adversity straight in the eye, refusing to blink, or give ground, even to their own deaths. The protected can’t begin to understand the price paid so they and their families can sleep safe and free at night. No, they are not victims, but are warriors, your warriors, and warriors are never victims, regardless of how and where they fall. Death, or fear of death, has no power over them. Their paths are paved by sacrifice, sacrifices they gladly make for you.

Like those who went before them in uniform, we owe them everything. We owe them our safety. We owe them our prosperity. We owe them our freedom. We owe them our lives. Any one of them could have done something more self-serving with their lives as the vast majority of their age group elected to do after high school and college, but no, they chose to serve knowing full well a brutal war was in their future. They did not avoid the basic and cherished responsibility of a citizen—the defense of country—they welcomed it. They are the very best this country produces, and have put every one of us ahead of themselves. All are heroes for simply stepping forward, and we as a people owe a debt we can never fully pay.

In his speech, Lt. Gen. Kelly tells the story of the bravery of two Marines, Corporal Jonathan Yale and Lance Corporal Jordan Haerter in Ramadi, Iraq.  Read the speech (and find links to the video) at:  whatsoproudlywehail.org

NOTE: An armistice is a formal agreement of warring parties to stop fighting. It is not necessarily the end of a war, since it might be just a cessation (a pause or stopping) of hostilities while an attempt is made to negotiate a lasting peace. The treaty between the Allies and Germany to end World War I is an example of a famous armistice.

For help answering the questions below, go to  va.gov’s History of Veterans Day and FAQs

1. a) At what time will bells be rung on military bases and in communities all over the world this Veterans Day?
b) What is the purpose of this observation?
c) What is the reason for ringing the bells 21 times?

2. Re-read the excerpt from Gen. Kelly’s 2010 Veterans Day speech. What idea from this excerpt most inspires you? Explain your answer.

3. What is the difference between Veterans Day and Memorial Day?

4. On what day is Veterans Day officially observed every year?

5. a) Why was Veterans Day called Armistice Day until 1954? Be specific.
b) Why was it changed?

6.  Who was the first president to issue a Veterans Day Proclamation? In what year did he do so?

7. a) Ask a grandparent how Veterans Day was commemorated when he/she was a teenager.
b) Ask a parent the same question.

8. Why is it important for every American to honor our veterans on Veterans Day?

9. Do you have any relatives, friends or neighbors who are veterans?  What do you think is the best way to acknowledge their service?

OPTIONAL: More than 60 world leaders, including US President Donald Trump and Russian counterpart Vladimir Putin, will attend commemorations in Paris on November 11 to mark 100 years since the end of World War I.  White House Press Secretary Sarah Sanders said,  “The President’s participation in this event will highlight the sacrifices that Americans have made, not only during World War I but also in the century since, in the name of liberty.”

Go to c-span on November 11 or after to watch the ceremony.

The purpose of Veterans Day is to to honor America’s veterans for their service and sacrifice.

How will you honor our veterans this Veterans Day?  Visit the following websites for some ideas:

or, volunteer at one of our Veterans organization: DAV, Amvets, VFW…

Encourage the families of those currently serving:

What is the National Bell Tolling?
Bells of Peace: A National World War I Remembrance is a national tolling of bells to honor those who served in the Great War. The United States participated from April 6, 1917 to November 11, 1918.

Why should we toll the bells?
Tolling of bells is the traditional way to mark someone’s passing. On special national occasions, bells are tolled in honor of the fallen. November 11 is the 100th anniversary of the signing of the Armistice that ended hostilities in World War I. In the war, 116,516 Americans died and over 200,000 were wounded.

When is the National Bell Tolling?
On Sunday, November 11, 2018 at 11:00 a.m. local time across the United States and its territories.

Where will the National Bell Tolling take place?
In communities, houses of worship, cemeteries, military installations, ships at sea – anywhere that Americans gather to honor their veterans.

Who is sponsoring the National Bell Tolling?
The U.S. World War I Centennial Commission is the sponsor. The Commission was created by Act of Congress in 2013 to honor, commemorate, and educate the public about American participation in World War I. The Pritzker Military Museum and Library, our founding sponsor, also endorses this event.  Veterans of Foreign Wars and American Legion are partners, as are the National Cathedral and the Society of the Honor Guard of the Tomb of the Unknown Soldier.  State World War I commissions and other partners are encouraged to co-sponsor and publicize the event.

How can my community group participate?
At 11:00 a.m. on Sunday, November 11, toll your bells slowly 21 times with a five-second interval between tolls. Groups that do not have bells can render the salute by other available means such as guns, cannons, rifles, and sirens.  No bell? No worries. We have a free downloadable smartphone APP that can be used privately or with public address systems.  Look for “Bells of Peace” on the Apple App Store or Google Play.

Why is it important to toll the bells 21 times?  We would rather toll our bell once in honor of each of our local veterans killed in combat.
The 21 tolls of the bell symbolize the nation’s highest honor.  It is based on the 21-gun salute, whose origin is described here.  We suggest you toll your bells 21 times, and follow that with an individual toll for each veteran you wish to honor, stating their name before each toll.  The ceremony could conclude with Taps or a solemn reading.

Where can I get more information?
ww1cc.org/bells.  At this link, you will be able to find suggestions for songs, poems, and other content you can use for your community event. You can also upload photos, videos, and information about your event, and find links to education and other World War I Centennial information.

Video – a medley of the Armed Forces songs, from the National Memorial Day Concert, in Washington D.C. 2010 (with lyrics):

Video – History of Veterans Day (from the History Channel):

NOTE:  The wearing of poppies in honor of America’s war dead is traditionally done on Memorial Day, not Veterans Day. The practice of wearing of poppies takes its origin from the poem In Flanders Fields, written in 1915 by John McCrae.

Have you ever read the Flanders Fields poem?  Have you ever given money to a veteran offering poppies at supermarkets or church?  Do you know how this tradition first began or what is done with the money collected?  For history of the Memorial Day poppies go to: www1.va.gov/opa/publications/celebrate/flower.pdf.