US to accelerate troop deployment to Baltics 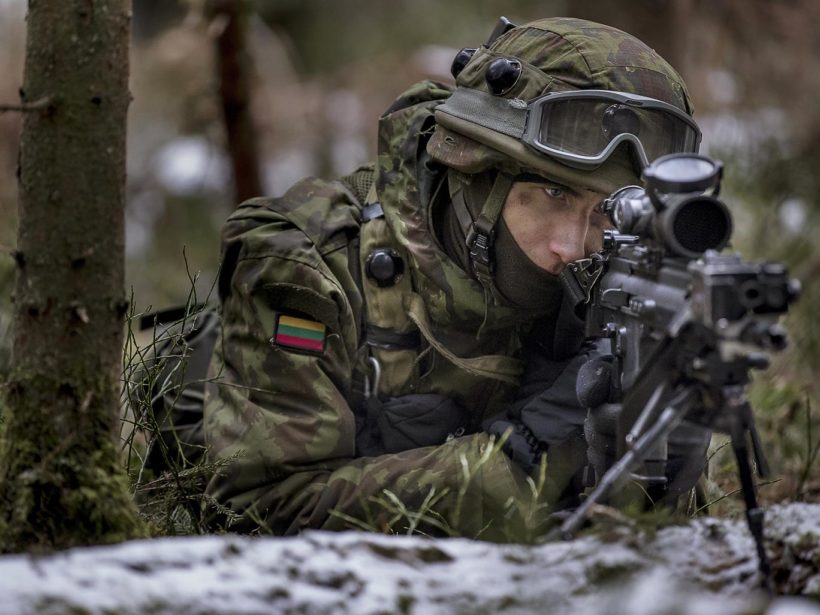 A Lithuanian soldier practices during a NATO military exercise, 'Iron Sword,' at the Rukla military base some 80 miles west of the capital Vilnius, Lithuania.

(Associated Press at Detroit News) WARSAW, Poland — The United States has decided to accelerate the deployment of troops to Poland, the Baltic states and Romania as part of raising the security of the region, Polish and U.S. defense officials said Wednesday

Polish Defense Minister Antoni Macierewicz made the announcement following talks with the commander of U.S. land troops in Europe, Lt. Gen. Ben Hodges, in Zagan, western Poland, where some of the troops will be deployed. It will be an Armored Brigade Combat Team from Fort Carson, Colorado. Another U.S. force, a battalion, will be deployed April 1 to Orzysz, in the northeast.

Hodges said the troops will arrive in the German port of Bremerhaven on Jan. 6 and will be immediately deployed to Poland, the Baltic states and Romania. Their transfer will be timed and treated as a test of “how fast the force can move from port to field,” he said.

“I’m confident in the very powerful signal, the message it will send (that) the United States, along with the rest of NATO, is committed to deterrence*,” Hodges said. [*Deterrence – a military strategy which uses the threat of retaliation effectively to prevent an attack from an enemy.]

He said the armored brigade has already moved out of its Colorado base and is loading on ships.

Poland and the Baltic nations of Lithuania, Latvia and Estonia have been uneasy about increased Russian military operations in the region, especially after its 2014 annexation [take control] of Crimea from Ukraine, and have requested U.S. and NATO troops’ presence on their territory as a deterrent. The alliance and the U.S. insist the troop presence is not aimed against anyone, but Russia has threatened measures in response.

The U.S. troops had previously been expected in mid- or late January.

“I am very happy that a decision has been taken by the U.S. side for an earlier deployment,” Macierewicz said.

Reprinted here for educational purposes only from an Associated Press story. May not be reproduced on other websites without permission from Detroit News. Visit the website at detroitnews .com.

The Baltic States are located in north-central Europe, on the eastern edge of the Baltic Sea, and along the western border of the Russian Federation and Belarus. The Baltic countries of Estonia, Latvia and Lithuania gained their independence from the former U.S.S.R. in 1991. Prior to World War II, Finland was occasionally deemed the fourth Baltic state by Nazi Germany.

2. a) Who is Lt. Gen. Ben Hodges?
b) What message does Gen. Hodges say the troop deployment will send?

4. a) What is the purpose of NATO?
b) What effect do Poland and the Baltic states think the U.S. and NATO troops will have on the region?

“Across Lithuania, Latvia and Estonia, fears are intensifying that Moscow, after displaying its military might over the past several years in Georgia, Ukraine and now Syria, could have the Baltic states in its sights next. Russian President Vladimir Putin has warned he wouldn’t hesitate to defend Russians wherever they live, words that feel like threats since significant numbers of ethnic Russians live in the Baltics. Whether the danger is real or just bluster remains to be seen.

To be pro-active, young Lithuanian civilians are learning counterinsurgency tactics on weekends. Others have taken steps to protect themselves. The government, in response to pleas from a fearful public, has issued a preparation manual.

Poland is creating a Territorial Defense Force to train thousands of volunteers for the kind of low-intensity hybrid warfare seen in eastern Ukraine, including cyber warfare. Also, some of the new volunteers will be assigned to protect Polish territory near Kaliningrad.”

President-elect Trump has said he would work with Russia’s president Vladimir Putin – that we share the same goal of destroying Islamic terrorists. He has also said that he might not automatically defend the Baltic states – that the U.S. is not the world’s police. It remains to be seen what position he will definitely take.

Do you think Poland and the Baltic states should prepare to defend themselves should Putin send in troops, or should it be up to the U.S. to be their protector? [Note: This is a very general question, as it is really a more complicated foreign policy issue. But overall, in what way do you think the U.S. should back our allies: with troops? provide their troops with military equipment, training and ammunition? Economic sanctions places on aggressive governments like Russia? Through diplomacy?] … Explain your answer.

The brigade combat team (BCT) is the basic deployable unit of maneuver in the US Army: