US press booted from Vietnam hotel 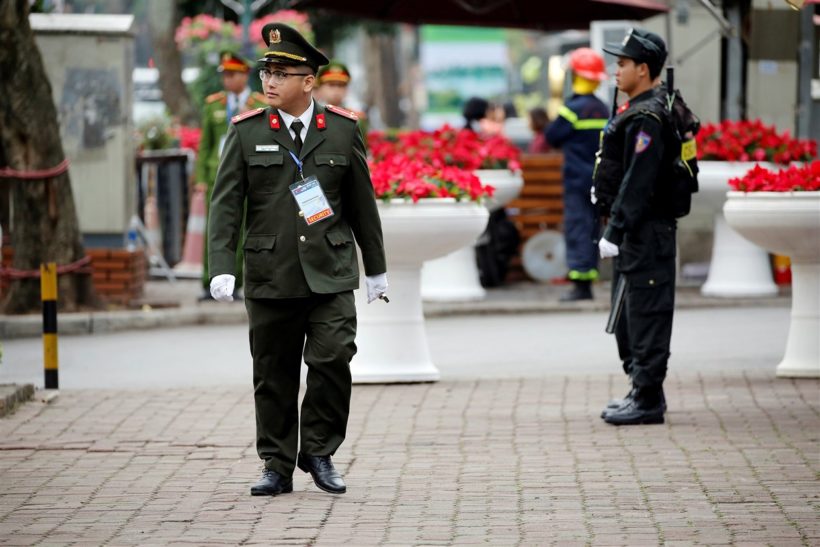 (by Nikki Schwab, New York Post) – The White House press corps was kicked out of its filing center in Hanoi, site of the two-day summit between President Trump and Kim Jong Un, when the North Korean leader’s security detail realized on Tuesday they were sharing the same hotel.

Kim arrived in Vietnam by train hours ahead of Trump, who landed after a journey that took 20 hours and 20 minutes aboard Air Force One.

“North Koreans yelling, demanding journalists in lobby not take pictures or even look at the scene,” Jacobs said.

Another Bloomberg reporter, Margaret Talev, reported that she was pushed from the lobby into the adjacent restaurant, where the window shades were pulled down and journalists were told not to take photos.

NBC’s Peter Alexander said he was told to delete a photo he had taken in the lobby. He and a group of reporters were forced from the hotel’s lobby upstairs, and told to take the stairs because “the elevator was not an option … because that would require our stepping on the red carpet that had been rolled out minutes earlier.”

Alexander said he then learned that the American press corps’ filing center would be relocated to another venue entirely.

The announcement came via tweet by the Vietnamese government, which featured three megaphone emojis and the message “FYI: the American Media Center will be relocated from Melia hotel to International Media Center,” sharing the new address.

NBC’s Alexander also said he missed Kim’s arrival and was forced to watch it from the emptying filing center on rival network CNN.

“In nearly 10 years covering the White House, having been on Presidential trips to more than 100 countries, I have never seen the White House Press Corps kicked out of our unilateral press/broadcast center by request of a foreign leader,” tweeted a miffed Fox News chief White House correspondent John Roberts [previously with CNN and CBS News].

In a follow-up tweet, Roberts pointed out that the White House press corps shared a hotel in Buenos Aires with French President Emmanuel Macron and there was “zero problem.”

“Kim [Jong Un] comes to Hanoi and we get evicted from space we had bought and paid for just because he is in the same hotel,” Roberts added.

Alexander also noted that he had been bumped to a smaller room thanks to the North Korean leader.

“The moment I checked in Monday night, the receptionist apologized that while the White House had booked me a larger room, she would not be able to accommodate the reservation ‘because of the visit of a head of state,’” he said, noting that the hotel worker wouldn’t confirm if that guest was Kim.

In hotel-heavy Singapore, where the first Trump-Kim summit was held, the North Korean leader and his delegation were kept three miles away from the American press corps, with Kim staying at the St. Regis and reporters based in a downtown Marriott.

2. For what reason was the White House press corp kicked out of the hotel?

3. What treatment did journalists describe?

4. Why did the same situation not occur at the first Trump-Kim summit, which was held in Singapore?

5. a) What did Fox News chief White House correspondent John Roberts have to say about the situation – what point did he make about French President Emmanuel Macron?
b) What major factor did Mr. Roberts ignore when comparing the press situation with President Macron?
c) In the specific case of Kim Jong Un, do you think Roberts’ reaction displays ignorance and naivety, or righteous anger? Explain your answer.
d) Do you think the American press should be outraged by being forced to move? Explain your answer.