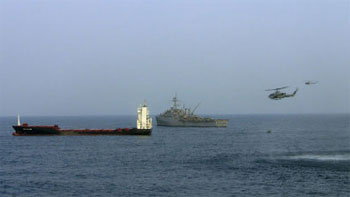 The Navy declined to give specific tactics used in the pre-dawn raid, but it ranks among the most dramatic high seas confrontations with pirates by an international task force created to protect shipping lanes off lawless Somalia.

Lt. John Fage, a spokesman at the U.S. Fifth Fleet headquarters in Bahrain, said the operation took about an hour and no injuries were reported among the Marines or crew of the German-owned Magellan Star, which was commandeered by pirates on Wednesday.

“There were no shots fired,” Fage said in an e-mail to The Associated Press.

A Turkish frigate on anti-piracy patrols, TCG Gokceada, first responded to a distress call from the Magellan Star, which flies the flag of Antigua and Barbuda.

The U.S. team from the 15th Marine Expeditionary Unit’s Maritime Raid Force launched the assault from aboard the USS Dubuque, an amphibious transport ship, a U.S. Navy statement said.

Fage said details of the operation could not be disclosed under Navy policies. But he noted the Marine Expeditionary Unit has the capability to board ships both by sea and air.

U.S. warships are part of a 25-nation mission protecting merchant vessels from pirate attacks off the coast of Somalia and into the Gulf of Aden. The task force often opens fire on suspected pirates, but boarding raids are rare.

In April 2009, a team of Navy Seal sharpshooters positioned on the fantail of a U.S. warship killed a trio of Somali pirates to free an American sea captain who had been taken hostage and was being held at gunpoint onboard a lifeboat.

Last month, Denmark said a helicopter from one of its warships fired warning shots and foiled a pirate attack off Somalia.

More than 140 piracy-related incidents have been reported off Somalia’s coast since January and more than 30 ships have been hijacked, according to U.N. and anti-piracy task force reports.

Associated Press.  Reprinted from FoxNews.com.  For educational purposes only.  This reprint does not constitute or imply any endorsement or sponsorship of any product, service, company or organization.  Visit the website at foxnews.com.

1. When was the German-owned Magellan Star captured by pirates?

2. How did U.S. Marines aboard the USS Dubuque respond to distress calls from the Magellan?

3. a) How many people were killed in the Marine rescue operation?
b) How many pirates were taken into custody?

4. For what reason do you think the spokesman for the Fifth Fleet declined to give details about the Marines’ raid on the Magellan Star?

5. How many countries are taking part with the U.S. in the mission to protect merchant vessels from pirate attacks off the coast of Somalia and into the Gulf of Aden?

6. How many ships have been hijacked by pirates since January 2010?

View photos of some Somali pirates at wsj.com.

For a map of Africa, including the Gulf of Aden and the Suez Canal, go to worldatlas.com.  (NOTE: The Gulf of Adan is between the Arabian Sea and the Indian Ocean.)

For background information on Somalia, go to the CIA World FactBook at cia.gov/cia/publications/factbook/index.html.