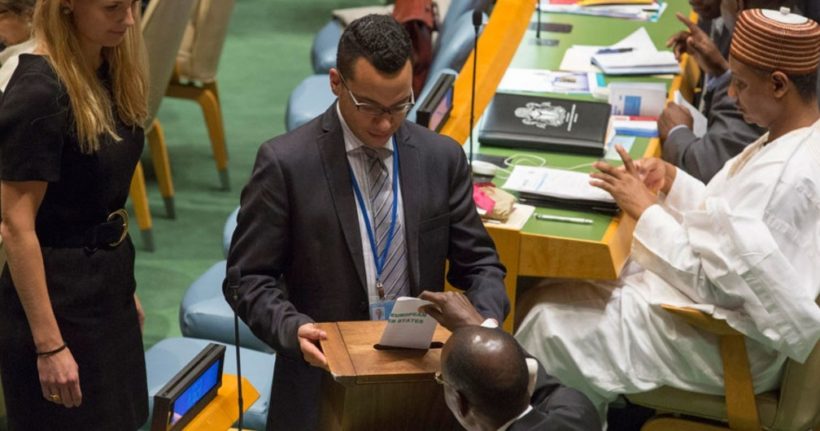 (BBC News) – Countries that have been widely criticised for severe human rights abuses are among 18 newly elected members of the UN Human Rights Council.

Campaigners had urged UN member states to oppose the candidacy of the Philippines and Eritrea and said the choice of Bahrain and Cameroon raised “significant concerns.”

The US quit the council in June, saying it made a mockery of human rights.

But its defenders say it does vital protection work around the world.

Countries can serve for two consecutive three-year terms on the council, which is based in Geneva.

The UN General Assembly in New York approved the new members in a vote on Friday. For the first time in the council’s history, the five voting regions had only put forward as many candidates as there were seats available, thus removing any competition.

The organisation said Philippines President Rodrigo Duterte’s crackdown on drugs had been “a killing frenzy that has left thousands dead” and that Eritrean authorities had persecuted and jail government critics.

The Philippines government has previously dismissed claims of human rights abuses, saying President Duterte had employed “lawful use of force” against threats to the country. Eritrea has also strongly denied such allegations, and insists that it treats its citizens well.

HRW also criticised the candidacy of Bahrain, citing its jailing of prominent human rights defenders such as Nabeel Rajab. Mr Rajab has served several years in prison since playing a leading role in a pro-democracy uprising in 2011. Bahrain insists its criminal trials have been independent and transparent.

In Cameroon, HRW said government forces and armed separatists had committed “grave abuses” in the country’s Anglophone region. The government denies the allegations. In June, a spokesman dismissed similar accusations in an Amnesty International report as “filthy lies” intended to destabilise the country.

“This lack of standards continues to undermine the organisation and demonstrates again why the United States was right to withdraw from it earlier this year,” she said. “The United States will continue to support reforms that would make the Human Rights Council credible.”

In June, Ambassador Haley described the council as a “cesspool of political bias” that displayed unending hostility towards Israel – a close US ally.

What is the UN Human Rights Council?

The UN set up the council in 2006 to replace the UN Commission on Human Rights, which faced widespread criticism for letting countries with poor human rights records become members.

The UNHRC meets three times a year, and reviews the human rights records of all UN members in a special process the council says gives countries the chance to say what they have done to improve human rights, known as the Universal Periodic Review.

The council also sends out independent experts and has set up commissions of inquiry to report on human rights violations in countries including Syria, North Korea, Burundi, Myanmar and South Sudan.

From BBC News. Reprinted here for educational purposes only. May not be reproduced on other websites without permission from the BBC.

1. a) What is the mission of the United Nations Human Rights Council (UNHRC)?
b) What does the UNHRC do? Be specific.

2. Why did the UN disband the UN Commission on Human Rights and replace it with the UNHRC in 2006?

4. a) The 47 members of the UNHRC are chosen from the 193 member states of the UN. Who votes to confirm UNHRC members?
b) How did the 5 voting regions remove any competition for the vacancies?
c) How did the US and the director of Human Rights Watch react to the confirmation of the 4 countries in question?

CHALLENGE: Why did the 5 voting regions remove any competition for the vacancies do so? (NOTE: The BBC reporter does not provide this information in the article.)

5. Which 4 countries do human rights campaigners, as well as the U.S., oppose? For each country, explain what they have done that should make them ineligible to sit on the Human Rights Council.

6. a) What does the idiom “same old same old” mean?
b) How does it apply to the UNHRC? (or, what is ironic about the new UNHRC replacing the UN’s CHR?)

7. What do you conclude about the 193 countries that make up the UN if they would vote to make countries that actually violate human rights members of the Human Rights Council?

8. Watch the videos under “Resources” below. The BBC reports in paragraph 3 of the news article above that the defenders of the UNHRC say it does vital protection work around the world. How does this contrast with what Secretary of State Mike Pompeo and US Ambassador to the UN Nikki Haley say?

The United Nations Human Rights Council (UNHRC) is a United Nations body whose mission is to promote and protect human rights around the world. The UNHRC has 47 members elected for staggered three-year terms on a regional group basis.  The headquarters of UNHRC is in Geneva, Switzerland.

The UNHRC investigates allegations of breaches of human rights in UN member states, and addresses important thematic human rights issues such as freedom of association and assembly, freedom of expression, freedom of belief and religion, women’s rights, LGBT rights, and the rights of racial and ethnic minorities.

The UNHRC was established by the UN General Assembly in 2006 to replace the UN Commission on Human Rights (UNCHR, herein CHR) that had been strongly criticised for allowing countries with poor human rights records to be members.

Two UN Secretaries General, the European Union, Canada, and the United States have accused the UNHRC of focusing disproportionately on the Israeli–Palestinian conflict, and many allege an anti-Israel bias – the Council has resolved more resolutions condemning Israel than the rest of the world combined. The UNHRC works closely with the Office of the High Commissioner for Human Rights (OHCHR) and engages the UN’s special procedures.

The UNHRC has 47 members, selected each year by the UN General Assembly for staggered three-year terms on a regional group basis. No member may occupy a seat for more than two consecutive three-year terms. The seats are distributed among the UN’s regional groups as follows: 13 for Africa, 13 for Asia, six for Eastern Europe, eight for Latin America and the Caribbean (GRULAC), and seven for the Western European and Others Group (WEOG).  (from wikipedia)

See list of members of the United Nations Commission on Human Rights.

How many UN member states are not full fledged democracies? (See answer here.)

In June 2018, U.S. Secretary of State Mike Pompeo and U.S. Ambassador to the UN Nikki Haley detailed the U.S. attempts to reform the UN Human Rights Council before deciding to leave the UNHRC: