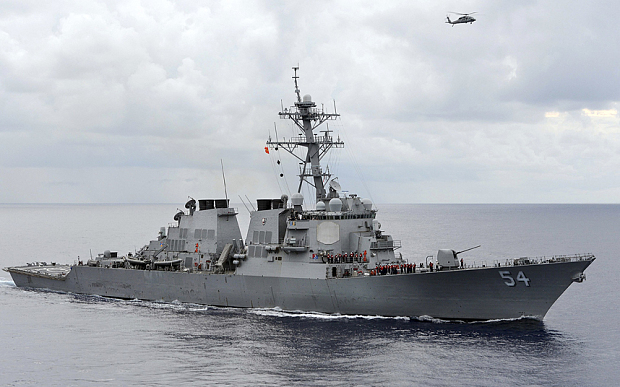 The U.S. Navy guided-missile destroyer USS Curtis Wilbur patrols in the Philippine Sea in this August 15, 2013 file photo. The destroyer sailed within 12 nautical miles of an island claimed by China and two other states in the South China Sea on January 30, 2016 to counter efforts to limit freedom of navigation, the Pentagon said.

(by Gordon Lubold in Washington and Jeremy Page in Beijing, The Wall Street Journal) — A U.S. warship conducted a patrol Saturday around an island in the South China Sea claimed by China and two of its neighbors, another in a series of operations challenging Beijing’s recent efforts to enforce maritime and territorial claims in the region.

The USS Curtis Wilbur, a destroyer, navigated within 12 nautical miles of Triton Island in the Paracel island chain in the South China Sea, a senior U.S. defense official confirmed. Triton Island is a manned Chinese outpost but is also claimed by Taiwan and Vietnam.

Known as a “freedom of navigation operation,” the patrol represented a challenge not to any territorial claim over Triton, but to what the U.S. sees as excessive restrictions from all three claimants on the waters surrounding the island, U.S. officials said.

It was the first such U.S. operation around the Paracels since 2011, they said. China says it has “indisputable sovereignty” over all South China Sea islands and their surrounding waters. It has controlled all the Paracels since seizing them from Vietnam in 1974.

The warship traveled within 12 nautical miles of Triton without providing prior notification to any of the three claimants, the U.S. defense official said. That is legally significant because it shows the U.S. exercising its rights to navigation over demands from all three claimants that foreign warships seek permission or give prior notice to transit their territorial seas.

Senior Col. Yang Yujun, a defense ministry spokesman, said Chinese naval forces and troops guarding the island had identified the U.S. ship and warned it to leave the area immediately, according to a statement on the ministry’s website.

The U.S. patrol was a “serious offense” and a “deliberately provocative action,” the statement said. “Whatever provocative action the U.S. takes, the Chinese military will take all necessary measures to resolutely protect the nation’s sovereignty and security.”

The operation lasted about three hours, the U.S. defense official said, declining to provide more specifics. The defense official also declined to describe any communications or interactions with the Chinese or vessels from other nations. But there was no Chinese navy presence seen in the area, the official said.

Patrols in the past have garnered significant attention from the Chinese, who typically send a small flotilla to investigate the arrival of any foreign nation’s ships.

“We saw nothing that was unusual in terms of the reaction,” the official said, declining to elaborate further.

The U.S. has watched with increasing alarm as China has stepped up activities to enforce claims to islands and other land masses in the South China Sea, including among the Spratly and Paracel island chains. Beijing’s claims in the Spratlys are contested by Vietnam, Malaysia, Taiwan, Brunei and the Philippines—a U.S. treaty ally. In the last two years, China has built seven artificial islands on the rocks and reefs that it controls in the Spratlys, raising fears among other claimants, and in the U.S., that Beijing will use them to enforce its claims in the area. China has pledged not to “militarize” the islands, but hasn’t made clear what that means.

In October, a U.S. Navy destroyer sailed within 12 nautical miles of one of the Chinese-built artificial islands in what U.S. officials said was the first of several such patrols designed to challenge China’s recent activities. (see the article Angry China Shadows US Warship Near Manmade Islands)

Beijing lodged a formal protest over that and said its navy ships tracked the U.S. vessel, warning it to leave.

The U.S. says it doesn’t take a position on who has sovereignty over land features in the South China Sea, but is opposed to the restrictions imposed by any country on navigation rights and freedoms around a feature such as Triton.

“The excessive claims regarding Triton Island are inconsistent with international law as reflected in the Law of the Sea Convention,” according to a statement.

U.S. officials said Saturday’s exercise was conducted on the basis of “innocent passage”— which according to the United Nations Convention on the Law of the Sea allows naval ships to transit another nation’s territorial waters without prior notice if they don’t conduct threatening activity.

China and some other nations have long demanded that foreign military vessels request permission before entering their territorial waters.

In September, however, a flotilla of five Chinese warships came within 12 nautical miles of the Aleutian Islands in the Bering Sea, a rare foray into U.S. territorial waters that was also done without prior notice and as “innocent passage”.

2. Why did the commander of the USS Curtis Wilbur take this action? (What was the motive of the U.S.?) Be specific.

3. The U.S. destroyer traveled within 12 nautical miles of Triton without providing prior notification to any of the three claimants, a U.S. defense official said. What is the significance of this action?

4. How did the Chinese react to this U.S. patrol?

5. How did the U.S. respond to the Chinese claim that it warned the U.S. ship to leave the area immediately?

6. What concern does the U.S. (and claimants Taiwan and Vietnam) have over China’s build up on the rocks and reefs that it controls in the Spratlys?

7. What was the purpose of a similar patrol by a U.S. Navy destroyer in October?

8. What action by the Chinese in September illustrates the government’s hypocrisy?

Reacting to the latest action by the Obama administration, Sen. John McCain, R-Ariz., who chairs the Armed Services Committee, said in a statement Saturday that he was encouraged by the Navy’s action. He said:

“This operation challenged excessive maritime claims that restrict the rights and freedoms of the United States and other nations under international law. I continue to hope these operations will become so routine that China and other claimants will come to accept them as normal occurrences and releasing press statements to praise them will no longer be necessary.”

Passage is innocent so long as it is not prejudicial to the peace, good order or security of the coastal State. Such passage shall take place in conformity with this Convention and with other rules of international law.

UN Law of the Sea Treaty:

Read an additional news report on this story at csmonitor.