U.S. to deploy special forces to Syria in about-face for Obama 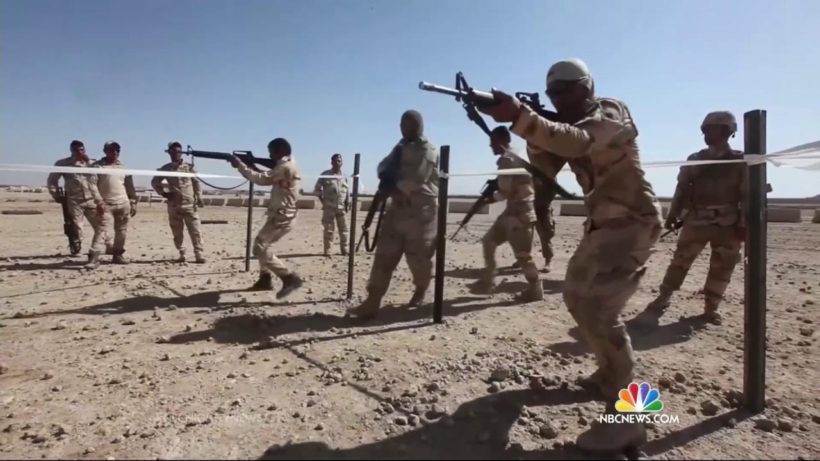 US special forces troops to be deployed to Syria

(by Nick Allen, London’s Daily Telegraph) Washington D.C. — President Barack Obama announced on Friday that he is sending dozens of special forces soldiers to Syria, beginning the first sustained deployment of US ground forces in the country.

US special forces have carried out raids in Syria, but this will be their first permanent presence inside the country.

It marks a significant escalation which the White House said was “consistent with the strategy to intensify the battle against ISIS.” The number of special forces being deployed in Syria will be “fewer than 50” according to a US official.

The special forces will work with the Syrian Arab Coalition along the Syrian border, including helping to co-ordinate air strikes.

They are not expected to be fighting on the front-lines and will provide “training, assistance and advice” in the same way US troops are already doing to anti-ISIS forces in Iraq.

Outlining what the role of US special forces in Syria would be, White House spokesman Josh Earnest said, “It will not be their responsibility to lead the charge up the hill. Will they be in the vicinity offering advice and assistance? I wouldn’t be surprised if that’s the case.”

Mr. Earnest added: “They are not being deployed with a combat mission. They will have the equipment they need if necessary. They will be able to defend themselves.”

A US official said there was “no intention of engaging in long-term, large-scale combat operations” in Syria.

Last month saw the first death of an American serviceman in action in Iraq since 2011.

Master Sergeant Joshua Wheeler died in a firefight as US special operations soldiers and Kurdish forces freed 70 hostages from an ISIS prison near Hawija.

The first stationing of US “boots on the ground” in Syria marks a significant change of direction for President Obama, who had repeatedly said in the past he would not put combat troops in the country.

The US will also deploy A-10 ground-attack planes and F-15 tactical fighter jets to the Incirlik base in southern Turkey, and will discuss with Iraq the establishment of a special forces task force there.

President Obama has also decided to increase military aid to Jordan and Lebanon to tackle ISIS.

Rep. Mac Thornberry, the (Texas) Republican chairman of the House Armed Services Committee, said the special forces deployment to Syria was “long overdue” and he added: “I do not see a strategy for success. Rather, it seems the administration is trying to avoid a disaster while the president runs out the clock [of his second term in office].” …

2. How is this deployment of Special Ops forces different from the raids they have carried out so far in Syria?

3. What will the approximately 50 U.S. Special Ops forces do in this deployment?

4. What have Obama administration officials said these forces will not do?

5. What did the Republican chairman of the House Armed Services Committee say about President Obama’s decision to deploy 50 Special Ops forces into Syria?
Ask a parent: What do you think of Congressman Thornberry’s assertion? Explain your answer.

7. A White House spokesman said on Friday that the President is opposed to a large-scale, long-term military operation in Syria. He said President Obama will not put the troops in a combat mission. Since 2013 President Obama has said numerous times he would not put U.S. boots on the ground in Syria. In 2014 he asked Congress to fund a $500 million “Syria Train and Equip Program” that has since failed. (see “Background” below).
Why do you think of President Obama’s new strategy? Explain your answer.

8. Would you want the next president (Democrat or Republican) to continue President Obama’s strategy in Syria? Explain your answer.

From a Reuters news report on Oct. 31:

A year prior to Friday’s announcement, President Obama requested $500 million from Congress for a “Syria Train and Equip Program” – a U.S.-led military operation that identified and trained Syrian moderate rebels inside Turkey who then returned to Syria to fight ISIS.

A year after US President Barack Obama asked Congress for the authority to train and equip moderate Syrian opposition forces to fight the Islamic State group, a senior general acknowledged in October that the $500 million program was in tatters.

The administration’s stated campaign to destroy the Islamic State group, known as ISIL or ISIS, has hinged on the Pentagon’s repeated assertions that local forces must push back the insurgent fighters to ensure long-term security in the region. The plan was to train 5,400 local Syrian rebels by the end of the year.

Gen. Lloyd Austin, chief of US Central Command, disclosed that there are no more than five US-trained Syrian fighters left, and acknowledged the program may be overhauled. Austin also confirmed the Pentagon inspector general is investigating his intelligence director amid whistleblower claims that intelligence assessments were altered to show a more positive picture of US progress.

The damaging revelations about the program — which has been straining to recruit nationalist rebels to fight against the Islamic State exclusively, and not the regime of Syrian President Bashar al-Assad — renewed questions about whether it was realistically conceived or should continue.

“Train and equip as conceived by the White House was mission impossible from the beginning,” said Frederic Hof, a former senior adviser on Syria for the Obama administration, now with the Atlantic Council. “The formula of recruiting people [nationalist rebels] who had been hammered for four years by the Assad regime to fight exclusively against ISIL was an elegant Washington maneuver totally disconnected from the reality on the ground inside Syria.”

At a bombshell Senate Armed Services Committee hearing Sept. 16, Gen. Austin was asked how many of the train-and equip-program graduates there were out of an initial group of 60 just three months ago. The program was funded in December 2014 and began in May 2015.

“It’s a small number,” Gen. Austin said, “and the ones that are in the fight is four or five.”

Christine Wormuth, the undersecretary of defense for policy, testified there are “between 100 and 120” additional fighters being trained in Turkey, to which Sen. Claire McCaskill, D-Mo., replied, “So we’re counting on our fingers and toes at this point.”

Read 16 Times President Obama vowed “No Boots on the ground in Syria” from USAToday.

Watch a montage of President Obama vowing “no boots on the ground” in Syria: