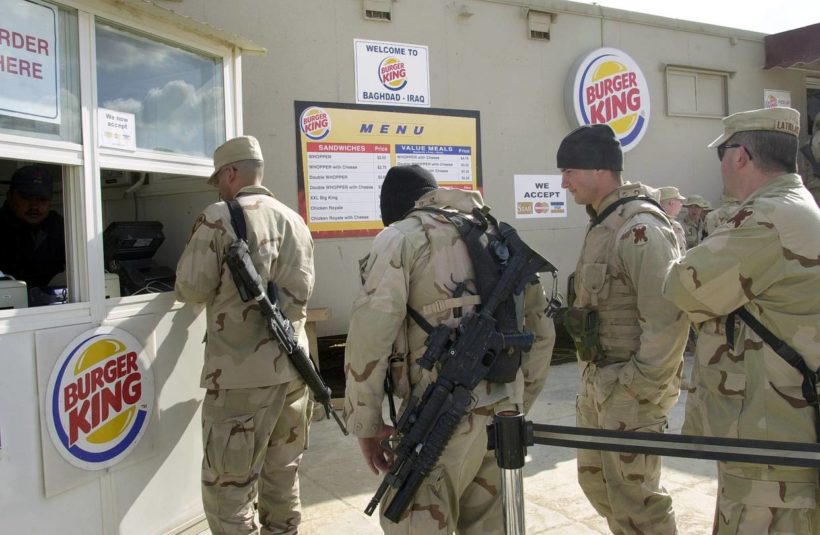 (by Julian E. Barnes, The Wall Street Journal) VILSECK, Germany — …When the Army rolls into Poland next month to take positions near the Russian border…the creature comforts will stay behind. No Whoppers. No foot-long Subway sandwiches. No Pizza Hut pies or caramel lattes at the Army’s version of Starbucks, Green Beans.

“You are never going to see Burger King,” Lt. Gen. Ben Hodges, the top Army commander in Europe, warned soldiers of the 2nd Cavalry Regiment at a recent rehearsal drill. “Be ready for potatoes three meals a day for six months. The Irish have figured out how to make it interesting. I am sure you can, too.” In Iraq and Afghanistan, soldiers stationed at big U.S. bases got used to [having access to] American fast food and shopping at military strip malls.

“We went a little too far on some of the luxuries,” says the regiment’s Command Sgt. Maj. Kevin Muhlenbeck, a veteran of both conflicts. “We set a climate that soldiers weren’t in a combat zone anymore. They weren’t in the right mind-set to fight tonight.”

On the menu for Poland: austerity. “The standard of living is Spartan—Spartan, plus Wi-Fi,” Gen. Hodges told the soldiers, to some chuckling. The Army says the internet is necessary for soldiers to keep up with paperwork, to Skype family members and to watch Netflix.

Some soldiers plan to get their fill before they leave their German base for Poland. “I am probably going to hit the American Burger King on post at least twice this week,” says Sgt. Zackary Cowher, 27 years old. “And then I am going to get out to one of the German Pizza Huts.”

Last year, NATO approved a deterrent force in Poland and the Baltic States to counter Russia’s military buildup. After a road march through the Czech Republic and Western Poland, the U.S. Army’s contribution to the NATO force will arrive at its new position early next month.

For much of the long wars in Afghanistan and Iraq, the Army fought out of forward operating bases. The military called them FOBs, and soldiers who rarely left those bases were called Fobbits, especially by Marines who often lived in more rugged conditions.

In 2010, when Gen. Stanley McChrystal was the top commander in Afghanistan, he ordered the closing of Burger King at bases in that country to put the military more on a war footing.

The ban lasted about a year. After Gen. McChrystal was forced to resign after his staff was quoted anonymously speaking derisively about the Obama administration, his replacement, Gen. David Petraeus, decided an Army moves on its stomach. He brought back Burger King.

…In Poland, the military will send toiletries and snacks, but no Whoppers, says Command Sgt. Maj. Muhlenbeck. Meals will be taken at a Polish mess hall. Too many amenities, he says, risk creating divisions between those on the front lines and those in bigger bases.

“You see how it starts eroding the fiber of teamwork,” he says. “Soldiers at outposts start thinking those guys have all that stuff and we don’t. You actually start seeing a level of animosity between traditional combat arms soldiers and soldiers who have more of the sustainment duty.”

Further complicating the culinary dynamic, U.S. troops will be working alongside British, Croatian and Romanian forces and under the supervision of a Polish brigade.

Gen. Hodges wants to integrate the Americans with their allies to create a seamless fighting force—the most important reason, he thinks, to keep Burger King out. “We are not going to have an American [separate area] inside a Polish garrison,” he says. “That defeats the whole purpose of being with our allies.”

The Wi-Fi exception to the Spartan ethic, he says, is a bow to the modern world. Soldiers need access to the internet to complete training, check their pay, complete various Army requirements—and to play games on their laptops. …

Reprinted here for educational purposes only. May not be reproduced on other websites without permission from The Wall Street Journal. (Originally published in the Mar. 14, 2017 print edition.)

1. How will meal options for U.S. troops deployed to Poland as part of a NATO force differ from options available to them in Iraq and Afghanistan?

2. How did the 2nd Cavalry’s Command Sgt. Maj. Kevin Muhlenbeck explain the decision? Be specific.

3. a) Define the following as used in the article:

b) Who is Ben Hodges? – What did he say about the menu for Poland?
c) How did Gen. Hodges explain the reason for this decision?

4. Why did Gen. Stanley McChrystal, the top U.S. commander in Afghanistan in 2010, order the closing of Burger King at bases in that country?

5. a) Why are U.S. troops being deployed to Poland?
b) Do you think prohibiting fast food outposts from operating during the deployment is a good idea for the reasons stated? Explain your answer.

Still, Russia has some of the most adept hackers on the planet. Military officials say they expect Moscow to try to break into any vaguely military network, even if it is used just for streaming movies. They are warning troops to be very careful how they use Wi-Fi.

“It gets back to vigilance,” says Col. William Holt, who helps oversee cybersecurity for the U.S. Army Europe. “This is not just about the military networks, but the Wi-Fi sites as well. There are risks. We are in a contested environment, so we have to make sure we act properly and protect ourselves. “

Soldiers can look forward to one other exception to the Spartan barracks conditions in Poland.

In Iraq and Afghanistan, the military’s “General Order Number 1” has banned alcohol at U.S. military bases there. European forces generally don’t follow that rule. The French army in Afghanistan had wine in their field rations. The Polish army in Iraq would put on feasts with alcoholic beverages available for visiting general officers.

Given the mix of soldiers in the NATO deployment, enforcing an alcohol ban would be a failing enterprise, American officers say.

“It will be impossible in this environment, and I believe not necessary, to have a general order number one banning alcohol,” Gen. Hodges told the 2nd Cavalry Regiment. “I am sure we will have one or two knuckleheads that will do something stupid, but first sergeants know how to deal with this.”